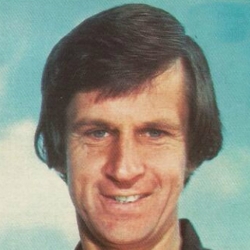 A native of Dundee, Gordon began his senior career with Montrose in 1961. He spent five seasons at Links Park, netting four goals in a match on three separate occasions. In December 1966 he moved to Raith Rovers, where his goal-scoring exploits continued, helping them to promotion to the top flight. Scoring 30 goals during the 1967-68 season, he was awarded the SFWA footballer of the year - the first non Old Firm player to win the award. In September 1969 he returned to Dens Park, having been on provisional terms with Dundee eight years before, and in six years there he finished as Dundee’s top goal scorer three times. He also scored the winning goal in the 1973 League Cup final. He left Dundee after their relegation in 1976, and spent the summer in America with the Seattle Sounders.

Returning to Scotland, Jim McLean brought Gordon to Tannadice in August 1976, and he made his United debut against Celtic in a League Cup tie. He formed a productive attacking partnership with a youthful Paul Sturrock, scoring 30 goals between them in his first season, with Gordon scoring winners against Celtic at Tannadice and Rangers at Ibrox. The goals eventually dried up during the 1977-78 season, and he fell out of the first team around New Year. Gordon spent the summer of 1978 back with Seattle Sounders in America before returning to Raith Rovers for a small fee, going on to score the last of his 264 league goals which stood as a Scottish record for 19 years.

He later took up a player/manager position at Starks Park, becoming manager once he retired. He returned to Tannadice in July 1983 as a coach, assisting Jim McLean during some of the Clubs most famous European ties over the next six years. In February 1989 he became manager of Dundee but left them in 1991 to join former team mate Jocky Scott’s management team at Dunfermline. He returned to Tannadice once more as coach in 1993, and at the age of 51 played during a close season tour of Trinidad & Tobago. He had a brief spell as caretaker manager, alongside coaches Maurice Malpas and Paul Hegarty, after the departure of Ivan Golac in 1995. He left United in 1998, and had a spell in broadcasting before returning to coaching with Dundee for a spell.