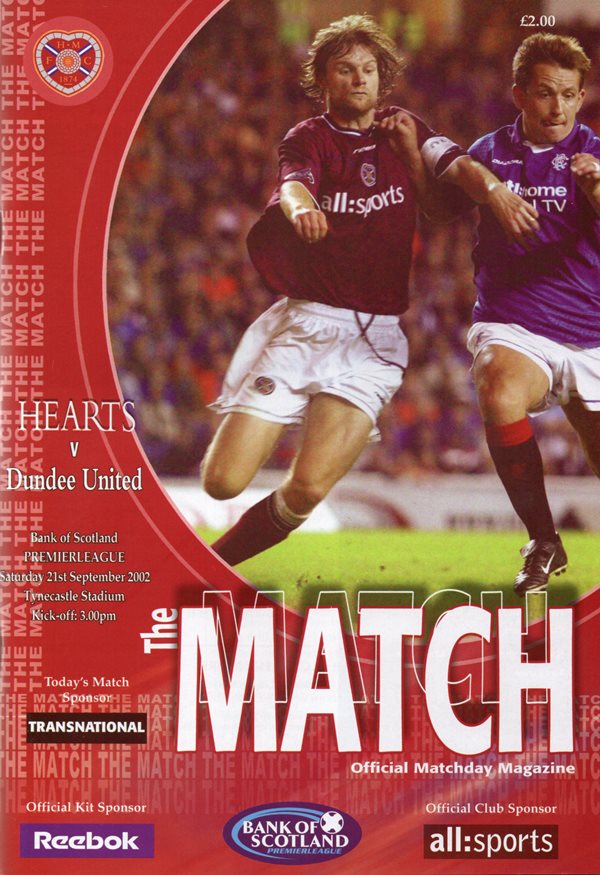 Despite last week's home defeat to Dunfermline, Alex Smith elected to field the same starting eleven for the trip to Edinburgh to meet Hearts. Allan Smart, following a week playing for the Under-21 side after his suspension, returned to the bench.

For Hearts, Scott Severin was first to offer a test, collecting a Stuart Duff clearance on the edge of the box before shooting wide. A Jean-Louis Valois corner for the home side was headed wide by Steven Pressley after a quarter hour's play and shortly after Steven Thompson offered United's first real threat when he latched onto a Kevin McKenna clearance before firing a volley straight at Roddy McKenzie in the Hearts goal. On 22 minutes, Mark de Vries and Phil Stamp combined to set up Andy Kirk, but the striker's shot was saved by Gallacher. At the other end, Charlie Miller shot wide for United after a run throught he middle. All the while, United found themselves continually caught by the long ball, and on 25 minutes, a cross from Severin almost found de Vries who was waiting to take advantage of an open goal. The reprieve was only temporary for United though, as Steven Boyack crossed in to the United area for Jean-Louis Valois, who was waiting at the back post to volley home the opener. Looking for the equalizer, Charlie Miller again looked United's likeliest threat, shooting wide with the Terror's last chance of the first half.

United came out of the gate at the start of the second half looking to peg Hearts back. A Miller free kick was fired into the box within two minutes and connecting, Mark Wilson headed the ball off the post and out for a goal kick. For Hearts, Kirk threatened again when he stepped around Gallacher but could only hit the side netting. The home side's second goal arrived on 55 minutes when Mark de Vries converted a Valois corner, heading home at the back post. Just after the hour mark, Charlie Miller was forced to withdraw with an ankle knock received in the first half. Kirk tested Gallacher again on 67 minutes with a headed effort, but the United 'keeper was up to the test. Coming on as a substitute, Allan Smart was unlucky not to pull one back with twelve minutes left, having run on to a long pass before heading down past McKenzie and shooting over from an angle. Having used all three substitutes, United were reduced to ten men when Smart was carried off with a leg knock in the dying stages, as Hearts saw the game out.