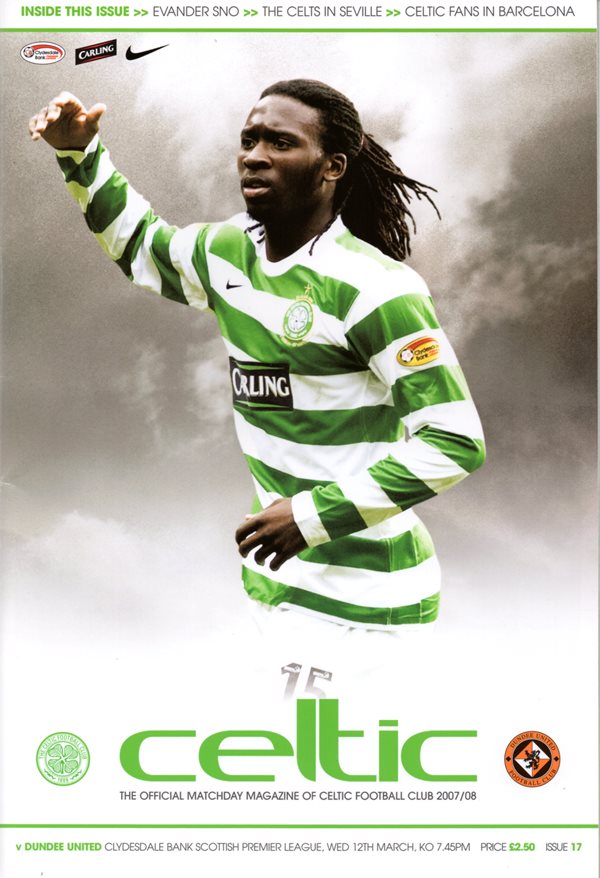 A battling performance saw Dundee United secure a morale-boosting 0-0 draw away at Celtic Park ahead of Sunday’s League Cup Final against Rangers at Hampden.

Craig Levein’s men were on the defensive for long periods of the match, but a combination of brave defending, poor finishing on the part of Celtic and a slice of well-earned good fortune saw the Tangerines hold on for an important league point in the fight for third place in the SPL.

And despite Celtic’s dominance, United could have won all three points with a few half-chances of their own.

However, it was Celtic who came flying out the blocks, and the home side almost took an early lead when McGeady skipped past Kovacevic and crossed for Nakamura, but thankfully for United his half-volley clipped the outside of the post and went wide.

Midway through the first half, United had their first spell of pressure. After winning their first corner of the match, a Grainger shot was deflected wide.

On the half hour, Celtic had their best chance of the half when Samaras picked the ball up from deep and fed Scott Brown. He played in McDonald, whose effort hit Zaluska’s left hand post and went wide.

United then began to look more of a threat on the break and on 38 minutes, created perhaps the best chance of the half when Kovacevic broke down the right. His cross found Conway free in the six-yard box but he somehow headed over.

The start of the second half mirrored the first, with the first attempt on goal coming via a Nakamura free-kick. His curling effort flew just past the top corner.

On the hour mark, United broke forward and won a corner. Conway’s cross caused havoc in the Celtic defence but United were unable to punish them.

The away side always looked like they could nick something on the break, and had another opportunity midway through the second half.

A free-kick from the left fell to de Vries at the edge of the box and his volley appeared to strike Barry Robson’s arm, but United’s claims for a penalty were ignored by the referee.

On 70 minutes, a Celtic corner fell to Caldwell on the edge of the box and his shot was spilled by Zaluska, but the United keeper gathered at the second attempt with the Celtic forwards ready to pounce.

In the closing stages, Celtic piled on the pressure and almost won it with five minutes remaining. Nakamura’s cross was met by Vennegoor of Hesselink, but he powered his header just over the bar, and United held on for a brave draw.