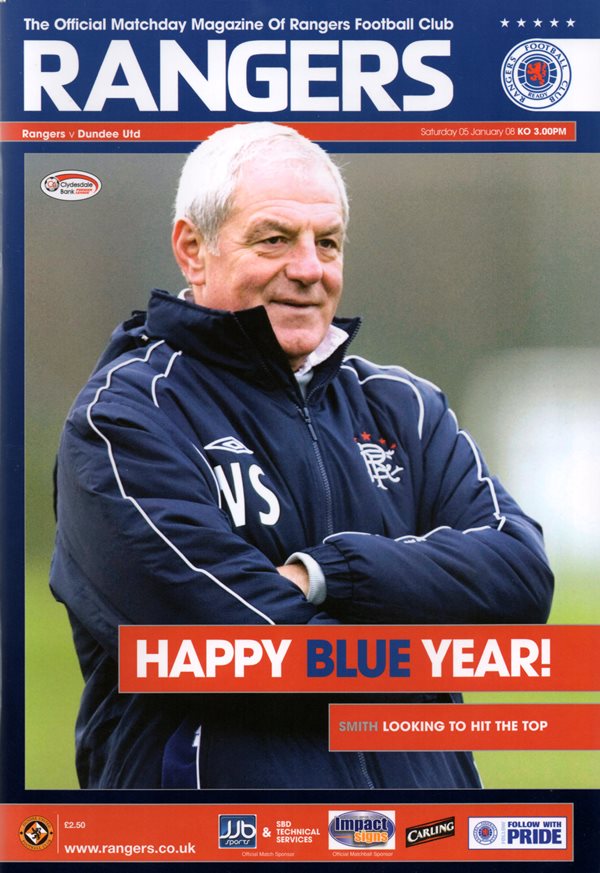 Two first-half headers from Steven Naismith and Barry Ferguson were enough to give Rangers a comfortable victory at a wet Ibrox this afternoon, despite Kris Boyd seeing his second half penalty saved by young stand-in goalkeeper Euan McLean.

United started in a 4-5-1 formation with a first start for young Eric Odhiambo seeing him on his own up front. In a quiet opening period, United were first to threaten when a Noel Hunt shot from the corner of the box was deflected wide for a corner.

The home side took the lead with their first real attack of the match. With nine minutes gone, Chris Burke got the better of Grainger on the right wing and put in a dangerous cross. Outjumping Sean Dillon just outside the six-yard box, Naismith was able to bury a header past McLean.

The next chance fell to Rangers midfielder Brahim Hemdani after their first corner of the match. His 20-yard shot went wide after the ball fell to him just outside the box from Lee Wilkie’s clearing header.

United were enjoying a lot of possession but were failing to turn this into anything dangerous. Their next chance fell again to Noel Hunt. A Danny Grainger long throw was hooked over McGregor in the Rangers goal by Hunt but the ball went across the face of goal and Barry Robson was unable to keep it in play.

Rangers seemed determined to get another goal before half-time and United survived two scares with 10 minutes to go before the break. Winger Chris Burke was allowed time and space to bring the ball onto his right foot just outside the box. He let fly with a powerful low drive which McLean was able to push inches past the post. From the resultant corner, full-back Alan Hutton rose highest to connect with the ball but it glanced off the top of the bar and went behind.

United did find themselves 2-0 down after 40 minutes. Again a Burke cross, this time from the left, caused problems in the United defence and Rangers captain Barry Ferguson was able to get a flick-on ahead of Darren Dods that sent the ball past McLean and into the bottom far corner of the net. After initially awarding the goal, referee Michael McCurry then consulted the far-side assistant who had raised his flag for offside. However, after a brief discussion, McCurry signalled that the goal would stand.

Just before half-time, Craig Levein was forced into a substitution when Sean Dillon, who had suffered a knock early on, was replaced by new signing Danny Swanson. Willo Flood took on the right back role, allowing Swanson his midfield berth.

United again threatened first after the restart, on an increasingly heavy pitch. Odhiambo laid the ball off to Morgaro Gomis but his attempted 20-yard shot was easily blocked. It was Odhiambo’s last contribution to the game as he was replaced by Craig Conway, which allowed Noel Hunt to take on the lone striker role.

Rangers were still creating the more dangerous chances and McLean did well to force Daniel Cousin wide of goal after the striker had been skilfully played in by Ferguson. Defensive colleague Grainger then put in a last-ditch saving challenge on Burke in the box after the winger had initially got the better of him.

United put together their best move of the game in 76 minutes when excellent interplay between Swanson, Hunt and Gomis set up the Frenchman for the shot but the ball was just poked away from him as he prepared to pull the trigger inside the Rangers box.

It was to be United’s last real chance of the match as the last 12 minutes saw Rangers go all-out for a third. Walter Smith had already replaced Naismith with Novo and, after 82 minutes, Kris Boyd came on for Cousin. Boyd immediately caused problems when he saw his shot blocked by a defender. However, the ball broke back to him and his second shot was blocked by McLean who had to advance well off his line to make the save. This led to more confusion between the officials when on spotting a raised flag, McCurry appeared to award a penalty. However, after being persuaded to consult his official, he instead awarded a free-kick for offside.

Euan McLean then made another couple of excellent saves, first palming over a Ferguson shot and then diving bravely at the feet of the advancing Burke after a Whittaker cross had found him in space at the back post.

The final minute saw Rangers awarded a penalty when makeshift right-back Willo Flood was harshly judged to have pushed Nacho Novo at the far post. Kris Boyd stepped up confidently but McLean got down well to his left to save the spot kick.