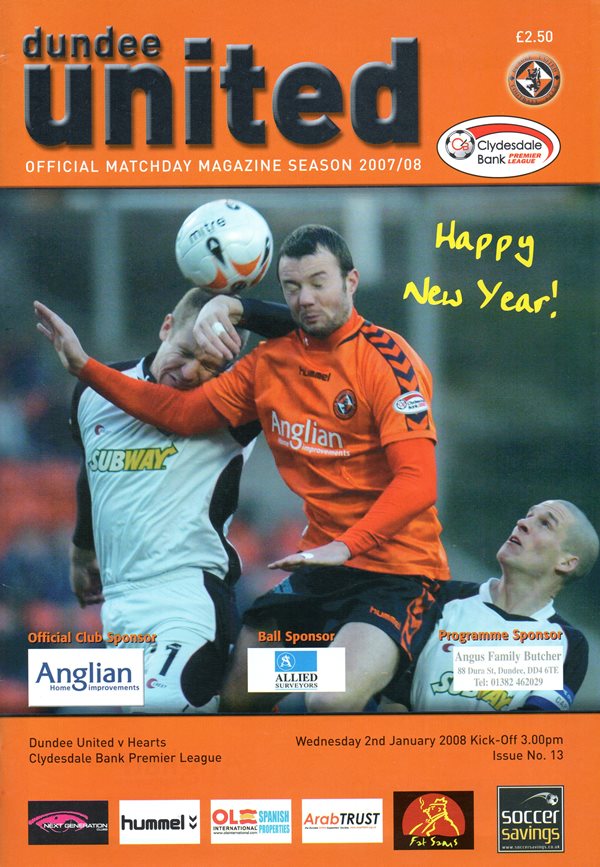 Craig Levein made two changes to the starting eleven that leaked five goals at Motherwell at the weekend, with David Robertson and new signing Danny Grainger stepping in for Prince Buaben and Jordan Robertson. Stephen Frail took charge of Hearts for the first time as caretaker manager, and brought in Andrius Velicka and Saulius Mikoliunas at the expense of the injured Ibrahim Tall and Kestutis Ivaskevicius.

It was not until midway through the first half that United tested Steven Banks’, and they took the lead in bizarre fashion with their first real opportunity. Robbie Neilson scuffed a clearance, forcing the Hearts stopper to pick the ball up, and United were awarded an indirect free-kick on the six yard line. Lee Wilkie squared the ball to skipper Barry Robson, who fired home from the penalty spot through a crowded goal mouth to give United the lead.
But when Hearts equalised in the closing stages of the first half after Berra poked home a Michael Stewart corner, neither side would have felt hard done by going in level at the break.

The turning point in the match came in the 67th minute when an off the ball incident between Lee Wilkie and Marius Zaliukas saw the Hearts midfielder shown a straight red card. After several minutes delay, Alan Freeland took the ball off Robbie Neilson who was waiting to take a throw-in and charged towards the box, pointing to the spot. Barry Robson dismissed the controversial nature of the award and was clinical from the penalty spot, scoring his second bizarre goal of the game. Buoyed by the goal, United ripped ten man Hearts open time and again, with debutant Swanson, Robson and Hunt all coming close. Michael Stewart found himself in the referee’s book for a cynical tackle on the edge of the box, and from the resultant free kick United put the game beyond their opponents as Noel Hunt made it third time lucky as he converted Robson’s curling cross. Clever footing saw him take the ball past Lee Wallace, and as he raced into the box to pit his wits one on one with Banks in the goal, a blatant trip from Wallace left Alan Freeland little choice but to give the defender a straight red card and point to the penalty spot for the second time in the afternoon. Barry Robson made no mistake, calmly converting the spot kick to earn himself a hat-trick. And to round off the game, Michael Stewart, who had been lucky to escape a red card just moments earlier, was sent packing in stoppage time, leaving just eight maroon shirts on the park.