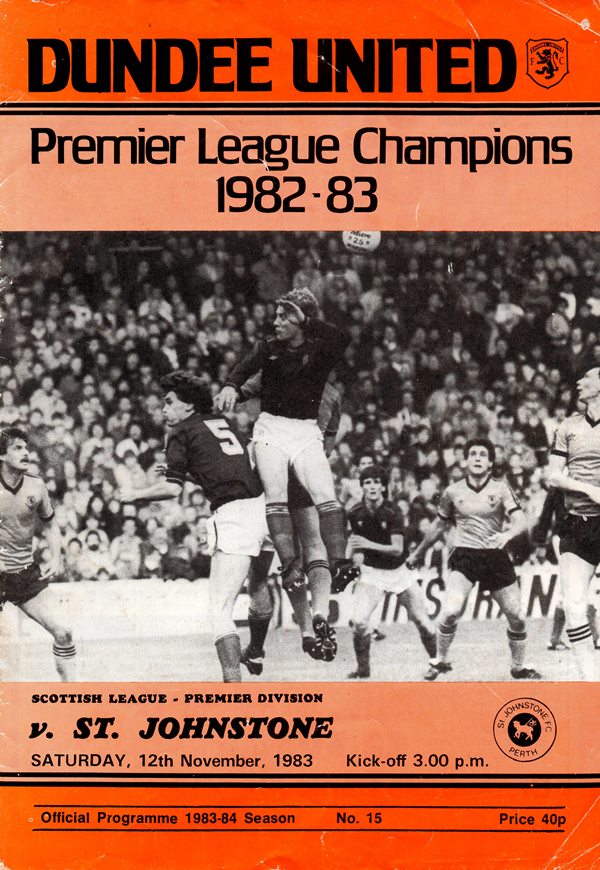 That’s more like it. A week that started clouded in uncertainty, ended with a performance of clear-eyed precision as Dundee United dismantled St Johnstone 7-0 in front of a Tannadice faithful, who were able to thank Jim McLean in person for turning down the Rangers job at the start of the week. It was business as usual from McLean, who decided to pick out the recent performances of Billy Kirkwood and Ralph Milne (six and nine goals so far respectively!) as not being up to the standard required in his own inimitable style, but both were in the line-up with Tommy Coyne coming in for John Reilly, some may say harshly given he had a goal and assist in Wednesday’s match against Alloa.

St Johnstone, who performed creditably against United in their earlier meeting at Muirton Park, would have known that their best hope of securing a point would be to slow United down at the start and frustrate. However the game was already over as a contest by the half-hour mark. Paul Hegarty opened the scoring in the fifth minute when at a set piece he was first to respond to a loose ball at the far post. Seven minutes later, Davie Dodds was fouled in the box and Eamonn Bannon scored from the penalty spot. The pressure on the visitors was relentless and in the 22nd minute Davie Dodds scored the third when the targets of McLean’s pre-match criticism, Kirkwood and Milne combined to open up the St Johnstone defence for Dodds to turn-in Milne’s low driven cross. Kirkwood was involved again in the 28th minute, when in midfield he directed a header out left to Bannon who was free to maraud his way to the bye-line and his floated cross was met by Davie Dodds who headed in his 15th goal of the season in just 22 games.

United were flying. Bannon and Milne were terrifying the St Johnstone defence, cutting them open at will to create angles and opportunities for Dodds, Coyne, supporting midfielders and defenders. A combination of some slack finishing and the obstinance of visiting keeper Roy Baines kept United at bay for the first thirty minutes of the second half before in the 75th minute Milne created yet another chance, this time for Richard Gough who advanced from full back to knock home the cut-back. Five minutes later, Eamonn Bannon's scored the pick of the bunch when he spotted Baines off his line and from the edge of the box and he beautifully lofted the ball into the net. Bannon was subsequently called into the Scotland squad to play East Germany after the match following the withdrawal of Jim Bett. With five minutes remaining United claimed their seventh when substitute Derek Johnstone laid the ball off to Billy Kirkwood who drilled in from the edge of the box. Johnstone’s assist could be his final act as a United player. His loan from Chelsea is now up, and it has yielded two goals in a League Cup match against Morton. McLean has been complementary about his impact but must decide whether to make the move permanent or allow him to return back south. With Tommy Coyne struggling to make an immediate impact and McLean appearing unsure how much to trust John Reilly with starting minutes, this is an interesting decision whilst he awaits the return to fitness of Paul Sturrock.

Tannadice was full of good will come full time as the home support lapped up the performance and the fact the mastermind behind this effort has committed his long term future to this team. However, St Johnstone can not be considered a real guide as to whether United have found their form, but next week they will be visiting Ibrox, now under the management once again of Jock Wallace, and we should have a far clearer indication if the fog of recent performances has been lifted against the team McLean turned down.

As has been stated many times over in the media, the decision I had to make over last week-end was the most difficult I have had to make in my life so far. You will no doubt have read the pros and cons many times, but the response I received during my period of deliberation, from the players, directors and staff at Tannadice and the supporters, makes me feel that it made it easier for me to stay. When you have a £1 in your pocket you always say money isn't everything. At the time of writing I still have that £1, so I most certainly think there are many more important things in life than money. In the knowledge of how difficult it will be to improve what we already have here at Tannadice (how can you improve on winning the Premier title?), looking at the Championship trophy really brings home the magnificence of last season's achievement, especially when you consider a Club of Aberdeen's standing appears on the trophy only twice and Dundee, with their prominence in the past. just once. Obviously with only two players in our first team pool over 30. there appears no good reason why we cannot maintain our existing standards for the next 5 years or so, and perhaps even improve further. Here I would like to express my heartfelt thanks to the supporters for their tremendous backing for me to stay. I don't want you to think that there is any lack of appreciation on my part when I don't acknowledge your support, merely an attack of self-consciousness.

On Wednesday at Alloa it was great to wrap up our League Cup section. We are now safely through to the semi-finals in February of that competition and the quarter finals in March of the European Cup, thus providing some breathing space to concentrate on our League challenge. Barring accident, newcomer Tommy Coyne will start today's match. He has good basic skills but onty by playing can he adapt to Premier standard. Whilst his arrival bolsters our pool of strikers, I still feel we badly need to add another new face in midfield, and hopefully before the turn of the year. Today, we welcome Atex Rennie's side for whom I have great respect. However, a win this afternoon is imperative after dropping three points we could ill afford to lose in our last two outings especially with the arduous fixtures that tie ahead.