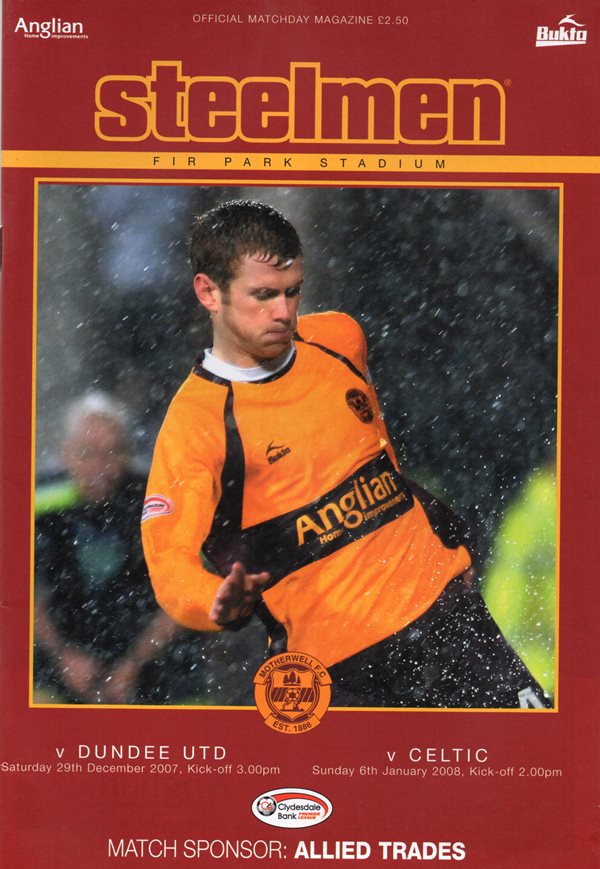 Third placed Motherwell opened up a six point gap over United with a convincing win at Fir Park this afternoon. The game was virtually over as a contest within 17 minutes, yet United fought back before half time – only to shoot themselves in the foot shortly after the interval. Despite suffering back to back defeats for the first time this season, ‘Well manager Mark McGhee named the same starting eleven for the 5th successive match. United were still without Kalvenes, and so Dillon carried on at left back while Flood deputised at right back. There was therefore only one change from the team that lost at home to Celtic, with Mark Kerr coming in for David Robertson in midfield.

Steven Hughes opened the scoring on 12 minutes with a low 15 yard drive from the edge of the box. Two minutes later and Chris Porter barged above the United defence to head Paterson’s cross low past Szamotulski. The Steel Men were playing some great stuff and on the quarter hour mark Clarkson was just off target with a low shot from twenty yards, after McCormick’s pace allowed him to break clear on the left. The third goal did arrive on 17 minutes. Porter got on the end of another cross from the left, and this time his header was saved by Szamotulski’s legs; but Ross McCormick had time to control and volley home the rebound from six yards. The visitors’ team and formation would require radical surgery as early as the 24th minute after the disastrous start. Prince Buaben and Jordan Robertson were replaced by Garry Kenneth and David Robertson, whilst Lee Wilkie moved to partner Noel Hunt up font, and 4-5-1 became 4-4-2. Following the double substitution and change of formation, United did manage to stem the tide and battle their way back into the game. Robson and Kerr were off target with volleys from the edge of the box, but a life-line arrived nine minutes before half time – David Robertson heading home a pin-point Sean Dillon cross from 8 yards. McCormick should have killed the game when put through on goal moments later, but a poor first touch took him too close to the keeper. United finished the half on the front foot, to give the travelling Arabs a little glimmer of hope .

United continued the revival at the start of the second period creating a couple of half chances. But the comeback came to a shuddering halt with goals conceded on 56 and 57 minutes – both of which were completely avoidable. The fourth arrived after David Clarkson rose above the United defence to head home McCormick’s set-piece from the right, the free-kick having followed from a failure to deal with a simple long clearance. The fifth came after a mistake gifted possession to David Clarkson at the edge of the box, though the striker did brilliantly to chip the ball over Szamotulski’s head from 16 yards, and in off the underside of the bar. A fine solo effort from Robson almost got United a second, the captain stepping inside Paterson and rattling the top of the bar with a fierce drive. But Motherwell continued to look the more dangerous, and only the off-side flag stopped number 6 as Clarkson bulleted a shot into the net from another Porter knock-down. United did manage to improve the look of the score-line with a couple of consolation goals. Fifteen minutes from the end the ball appeared to rebound into the net off Noel Hunt as ‘Well failed to clear a dangerous Flood cross. Another Flood cross presented Wilkie with a free header from five yards – but the make-shift striker set his effort wide of the post. In injury time Noel Hunt got his second, and United’s third, flicking a header into the net from six yards. But United had been well beaten by a strong and settled Motherwell side, with the visitors still struggling to cope with the absence of one or two key players.

The match was totally overshadowed by the collapse of Motherwell captain Phil O'Donnell with 12 minutes left to play. The 35 year-old midfielder fell to the ground just as he was about to be replaced with Marc Fitzpatrick, and was treated for around five minutes on the field by both Motherwell and United club doctors. Having been taken by ambulance to Wishaw General Hospital, his death was later confirmed by the Fir Park club.