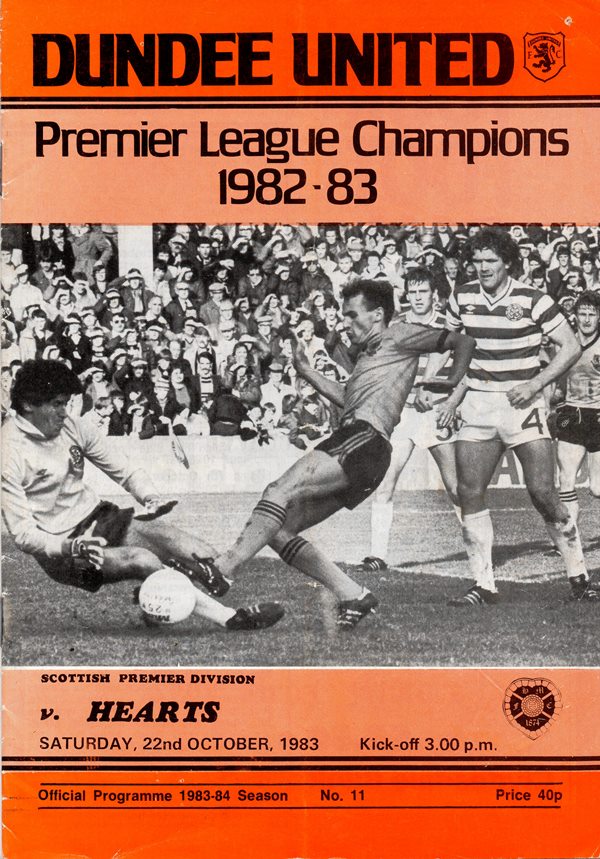 Seeing United, Celtic and Aberdeen within a point of each other at the top of the league at this point in the season would have surprised nobody, but a few eyebrows may have been raised to find Hearts muscling their way into a three-way share of the lead straight after their promotion from Division One. They arrived at Tannadice, with a 4,000 strong travelling support, knowing a win could give them an unlikely leadership of the league with Aberdeen hosting Celtic elsewhere. For United, the question would be how much had their 0-0 draw with Standard Liege in Belgium on Wednesday taken out of them? Jim McLean made only one change from midweek, with John Reilly coming in for Maurice Malpas, but United, once again after a European game this season, failed to convince and were lucky to secure a win that keeps them top of the table.

Hearts started with a belief that they could cause United problems, with their young central midfield duo of Gary Mackay and Davie Bowman revelling in the battle for supremacy against John Holt and Billy Kirkwood. Their defence with Walter Kidd and George Cowie at full back kept Eammon Bannon and Ralph Milne quiet for most of the afternoon, but one slip-up from Kidd was enough to give United the win. In the 37th minute, Davie Narey chipped a ball into the box which Reilly reacted quickest too, cutting it back into middle where Kidd tried to pass it back to his keeper but instead it fell to Davie Dodds who scrambled the ball beyond Henry Smith and Sandy Jardine for the game’s only goal. Dodds will have been unconcerned about how it went in. This was his first goal since netting against St Johnstone in September, but despite the relative drought, he’s now scored nine for the season.

However, United struggled to create anything meaningful for the rest of the match. A header for Milne, that was easily saved by Smith in the second half was the clearest chance created. Hearts will feel they should have secured at least a draw based on their play and in the last minute substitute and former Scotland winger, Willie Johnstone, hit a superb free kick that Hamish McAlpine had to grab at the second attempt to prevent it inching across the line.

The win was enough for United to take sole possession of first place in the division following Celtic’s 3-1 defeat by Aberdeen. However, the last few weeks in the league have been marked more by perspiration than inspiration. McLean’s issue will be how to reignite his team’s creative spark which has gone missing. Whilst it is encouraging that they have continued to pick up victories, there will surely be a limit to how many more times the Tangerines will be able to drag two points out of games they are no longer dominating.

Last weekend produced an amazing combination of results with none of the top five sides winning. Fortunately, from our point of view, we didn't win namely because our match was postponed. As a result, although we started the day only a point ahead, the surprise results elsewhere, we ended the day still on top albeit on goal difference. That in itself was a satisfactory situation but to be honest whilst a free Saturday before a hard European tie is an unexpected bonus, I am not so happy that only Richard Gough, Hamish McAlpine, Maurice Malpas and Ralph Milne had any match practice in the ten days prior to our tie in Liege. However, I would have been even less happy had last weekend's game with St. Mirren taken place and produced a crop of injuries. These notes were penned prior to our European Cup tie in Belgium and I only hope that we achieved a good result. It would be a great boost to the club for the winter months if we were still involved in the quarter-finals of the European Cup due next March. I knew before the season started that our depth of pool was not satisfactory, and you'll no doubt be fed up with me bemoaning our failure to add to the squad. Because of injury we have been almost totally deprived of Paul Sturrock's services. Yet, after a quarter of the season, we have suffered only one defeat and still remain top of the league, I would have gladly settled for that situation given prior knowledge of the circumstances.

Paul Sturrock came through a reserve outing with St. Mirren without further reaction and I hope that Paul is now well on the road back to full fitness. The situation that Hearts have found themselves in typifies my dislike of the Premier set-up. The financial penalty that relegation has brought to Hearts, Hibs and Dundee has been far too severe. The League does have its good points, though. Witness the competitive and high class matches such as Dundee's match with Rangers last Saturday. I am certain that Alex McDonald would have been highly delighted had he known how well Hearts would start the season, especially with youngsters like John Robertson, Dave Bowman and Gary Mackay regular members of the side. A cracking encounter is in prospect this afternoon in a match which is vitally important to both sides. Hearts' presence in the top grade of Scottish football is essential with their crowd potential and the revenue that it generates. I only hope that Hearts improvement has not been sufficient to deny us both points today.