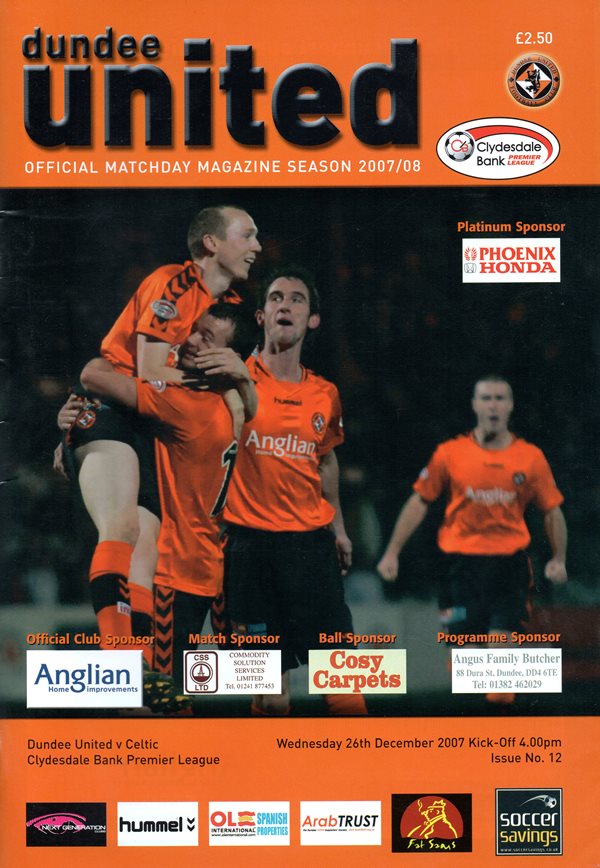 Second half strikes from Jan Vennegoor of Hesselink and Stephen McManus – both from set pieces from Paul Hartley – consigned United to a third consecutive home defeat this afternoon.


After an even first half, in which Barry Robson had hit the bar from long range and Grzegorz Szamotulski produced another contender for save of the season, United went behind midway through the second half from a corner.


With the slender lead likely to lead to a nervy ending for the visitors, Celtic found the killer second seven minutes later, when a Hartley free kick was touched on by substitute Donati and bundled into the net by McManus.


There were three changes to the United side which started the 2-1 defeat at home to Gretna. Grzegorz Szamotulski, Lee Wilkie and Jordan Robertson started, with Euan McLean, Stuart Duff and Garry Kenneth dropping to the bench.


Celtic showed two changes to the side which drew 1-1 against Hibs. Bobo Balde and Jiri Jarosik were recalled to the starting line-up, with Steven Pressley and Massimo Donati dropping out.


Midway through the half, Barry Robson’s dangerous corner targeted Lee Wilkie virtually underneath the bar, but with the big defender preparing to head into the net, Mark Brown thrust out his left hand to knock the ball out of play.


Jarosik and McManus fired over the bar for Celtic shortly after, before the game sprung to life in the final ten minutes of the first half. United broke up a Celtic attack, and Willo Flood passed to Prince Buaben, who found Robson in space.


With no immediate danger apparent, Robson took a touch before unleashing a piledriver from over 25 yards which cannoned off the crossbar with Brown unmoved.


Just as everyone was getting their breath back following that effort, Celtic were denied an opener by a truly world class save from Szamotulski. Hartley swung in a corner from the left, which Vennegoor of Hesselink met well.


The Dutchman’s header was destined for the bottom corner before Szamotulski somehow got across to turn the ball onto the cross bar and away from danger.

Celtic upped the tempo in the second half, forcing United onto the back foot in the opening stages after the break. The home side had seemed to ride out the storm, but went behind from a set play midway through the half.


Flood halted the progress of McDonald on the left wing, turning the ball out for a corner. Hartley swung the ball in, and just as he had done in the first half, Vennegoor of Hesselink rose to direct a header across Szamotulski.


With the ball angled further across, not even the Polish goalkeeper could reach this one, and the ball went in off the far post.

Just as United looked for a response, they fell further behind with fifteen minutes remaining following a debatable free kick awarded in Scott Brown’s favour for a tussle with Barry Robson.

Hartley swung the ball in, and Donati got a touch at the near post which took the ball beyond the United defenders and allowed Stephen McManus to bundle the ball home from close range.


Try as they might, United couldn’t find a route back into the game. Substitute Craig Conway put in a dangerous cross which caused confusion between McManus and Brown, while another Conway cross appeared to be handled by Balde, but no penalty was awarded by Eddie Smith.


In the closing minutes, Flood and Robson tried their luck, but United couldn’t find a goal to continue Celtic’s run of conceding goals away from home.