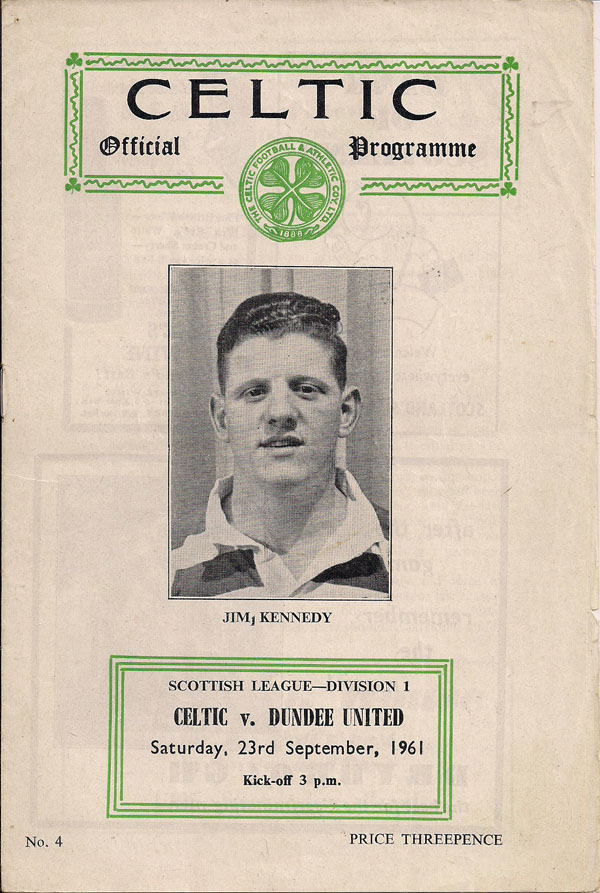 United travelled to Parkhead still on the hunt for their first away win of the season, despite having recorded two victories at Tannadice to sit them three places ahead of Celtic in the Division One table. Jerry Kerr made no changes to the team who were victorious one week prior against St Johnstone.

Kerr's men were under pressure from the word go in Glasgow as first John Divers then John Hughes swept shots past Rolando Ugolini's post. It took the Celts just thirteen minutes to break the deadlock. All looked harmless when Bobby Carroll picked up a ball on the left wing, but the devastation came following his cross, as it was met by the on running John Hughes who smacked the ball home from 25 yards. For the opening twenty minutes, United suffered, and Ugolini could only watch as shots cannoned off the posts and flew by. As United began to settle, they were afforded their first chance of the game through Dennis Gillespie, who turned quickly and shot goalward to force a save from Frank Haffey. Somewhat against the run of play, United then notched an equaliser, and it was Dennis Gillespie who scored it. Picking up the ball in his own half, he drove forward to beat three Celtic players before drawing back with his right to launch a 30 yard strike beyond Haffey into the net. A stunning goal, greeted by a stony silence from the Glasgow crowd. The relief was short lived though, as Steve Chalmers netted for Celtic on the stroke of half time, picking up a pass from 12 yards out, which he cooly slotted home.

Any encouragement United had taken from Gillespie's goal had began to wain, thanks to Chalmers' half time strike, and it could have been 3-1 upon the restart, as a vicious shot from Paddy Crerand swept past the post. Jim McMichael was unlucky for United moments later, forcing a save from Haffey, which the Celtic 'keeper spilled out for a corner. Celtic's continued pressure eventually paid off, however, when Divers headed off the crossbar and Mike Jackson pounced on the loose ball to knock home the rebound, rounding off a comfortable victory for the home side.