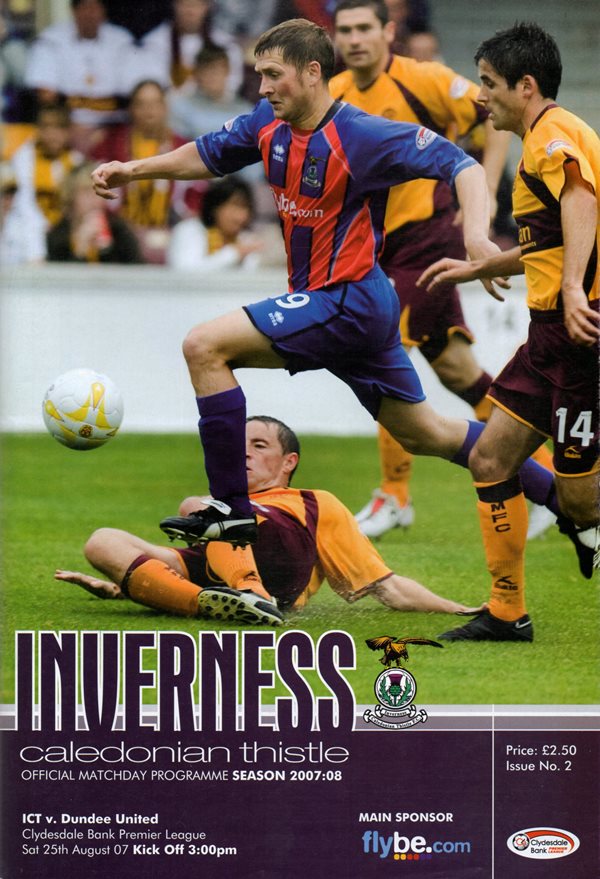 Dundee United traveled to the Caledonian Stadium to face Inverness CT after an indifferent start to the league season. The Highland side were still looking for their first points of the season and were now without a manager following the resignation of Charlie Christie. Craig Levein had a number of injuries in his squad which hampered his team selection. The United manager made two changes from the side which had drawn 0-0 with Hibernian at Tannadice the previous weekend. Willo Flood and Craig Conway had both suffered injuries with the former dropping to the bench and the latter missing out altogether. Garry Kenneth and Prince Buaben took their places in the starting 11. Craig Levein made the surprise decision to plump for Lee Wilkie as a lone centre forward, supported by Noel Hunt and Barry Robson from the flanks. Donald Park took charge of Inverness for what is likely to be the first and last time, and he made just one enforced change to the team that narrowly went down 2-1 to St Mirren in their last match. Canadian internationalist Richard Hastings was ruled out with a muscle strain, after the left-back missed his country’s 1-1 midweek friendly with Iceland, with Roy McBain stepping in.

After a promising opening quarter of an hour, in which United threatened first through a Mark Kerr half-volley, ICT began to take control of the game. In a whirlwind five minute spell, the home side created their best three chances of the game. First, Marius Niculae produced a wonder save from Grzegorz Szamotulski in the fifteenth minute after Ross Tokely and Graham Bayne combined to send the ball into the path of the imposing Romanian. But his header was tipped away superbly by the 13 times capped Pole. Bayne was next to test the Polish keeper, when he latched onto a through ball from skipper Grant Munro. But his rasping effort was parried wide as it sailed towards the top right hand corner of the visitors’ net. Spurred into life, ICT again came close in the 20th minute when Niculae zipped the ball across the United goal mouth. Stuart McCaffrey slid in to connect well, only to see his shot end up in the side netting. Inverness continued to push for the opener, although they failed to really test Szamotulski again in the first half. Niculae teed up Graham Black outside the United box, but he snatched at the opportunity, which ended up comfortably wide. Niculae was again causing trouble for the United defence, and the highly-rated former Sporting Lisbon starlet sent a looping effort toward the United goal, but it was collected by the keeper. In the 32nd minute, Barry Robson got his first shot at goal, although his 25-yard strike was well over the bar. But with just minutes to go before the interval United almost stole the lead. Morgaro Gomis shot from the 18-yard line, but his seemingly harmless drive found its way through a crowded penalty box, and Fraser had to scramble to tip the ball around the post.

Both sides returned from the tunnel unchanged, although it appeared as though United had fielded a completely different eleven as they put a disappointing first-half behind them and grabbed the game by the scruff of the neck. Just 90 seconds after the restart an apparent cross from Seán Dillon found the back of the net to break the deadlock. He whipped the ball in from the corner of the penalty box, but as Robson threw himself at the cross, failing to connect, the hapless ICT defence could only watch as the ball curled into the bottom left hand corner of Fraser’s net. Although Inverness were the next to threaten, when Bayne headed a Don Cowie cross agonisingly close for the home side, United never looked back after taking the lead. Lee Wilkie played Mark Kerr through on goal, but just as the experienced midfielder was about to pull the trigger, he was sandwiched between two Caley defenders and referee John Underhill had no hesitation in pointing to the spot, with little protest from the ICT defence. Barry Robson, fresh from his Scotland debut midweek, stepped up to slot the ball past Fraser as he sent the keeper the wrong way. At 2-0, United were cruising, and Inverness looked a defeated side. With just 11 minutes to go, any doubt as to where the points were going was ended as United were awarded a second penalty. Lee Wilkie was again involved in the claim. As the 6’4 centre half turned centre forward made for the bye line in a seemingly inconspicuous attack, Munro lunged in with a needless tackle, perhaps venting frustration at his side’s predicament. Barry Robson opted for the same corner, placing the ball to the left of the keeper, who again chose to dive right. Inverness almost grabbed a late consolation, but Munro’s stinging drive was always rising and flew over the cross bar.