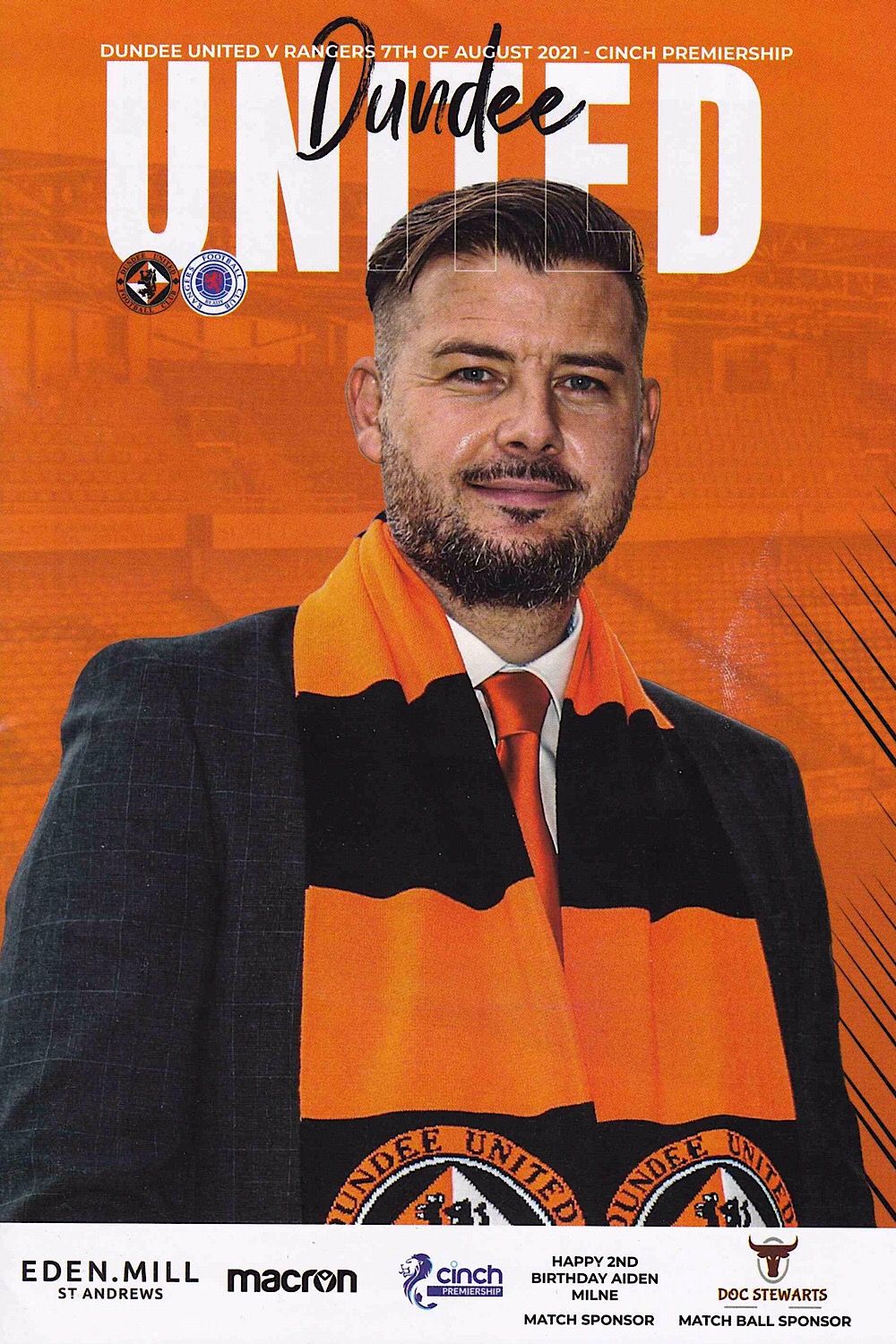 United welcomed Steven Gerrard’s Champions to Tannadice in the hopes of picking up their first league win of the season, buoyed by the return of 4,600 Arabs to the terraces – the first substantial crowd inside Tannadice for almost 17 months. Tam Courts made 2 changes to the side that were defeated at Pittodrie, dropping skipper Mark Reynolds and the injured Lawrence Shankland to incorporate Jeando Fuchs and Logan Chalmers into the starting line-up. The gaffer also decided to tweak his system, with 4-3-3 preferred to the 3-5-1-1 setup utilised a week prior. The Blues travelled to Tayside off the back of a crushing 2-1 Champions League qualifier loss in Sweden at the hands of Jon Dahl Thomasson’s Malmo, with United hoping the extra recovery time they enjoyed in the week since the trip to the Granite City would give them an advantage over their opponents.

United started brightly, forcing 2 corners inside the first two minutes, laying bare their intentions of taking the game to the favourites rather than vice versa. The hosts also mustered the first shot on target, with a deflected Fuchs pass sitting perfectly for Calum Butcher to strike, but the midfielder’s effort from range was straight down the throat of McLaughlin. Rangers hit back with a chance of their own after 7 minutes. Aribo received between the lines before finding Morelos on the shoulder of Mulgrew inside the United area, but the Ex-Celtic man threw himself in front of the Colombian's shot, much to the delight of the Arabs. However, the danger wasn’t yet over. Tavernier recovered the loose ball and fed Aribo on the right-edge of the box, and the winger jinked past the challenges of both Fuchs and Robson before laying the ball back to the unmarked Morelos who swept his effort narrowly over Siegrist’s crossbar and into the Shed. It was clear the United players wanted to utilise the energy from the stands to spur themselves on, getting the Arabs behind them from the offset with sharp break-away moves and hunting in packs when possession turned over. It took another 19 minutes for either team to construct a clear-cut chance, Morelos heading a looping Kent cross wide of the near-post from just outside the 6-yard box after the second phase of a Tavernier free-kick that Mulgrew hacked clear. Soon after, United went close to breaking the deadlock. Chalmers received wide on the right and, after a step-over or two, delivered a teasing, in-swinging cross with his left foot towards Pawlett’s front-post run across Goldson, the former MK-Dons man inches away from glancing the ball into the far corner. More high-octane pressing from United earned another corner with 10 minutes until half-time, from which a shout for handball came. Mulgrew met Pawlett’s corner and diverted the ball towards a combination of Harkes and Goldson, the former flicking the ball onto the latter’s arm from extremely close-range sparking appeals from both those on the park and on the terraces for a spot kick, referee Don Robertson not interested. The home side continued to threaten from set-pieces. Pawlett drove at Goldson after intercepting a Kamara pass before being scythed down by the centre-half just inside the Rangers half. The United man dusted himself off to take the free kick, finding Mulgrew peeling off the back of Aribo who headed goalward. McLaughlin clumsily spilled the defender’s weak effort wide for yet another corner. United were reminded of their opponents’ threat on the stroke of half-time, as a Tavernier free kick whistled over the bar from almost an identical position he scored from on his last visit to Tannadice, after Mulgrew cynically hauled Morelos down, the veteran perhaps lucky to escape with just a caution.

In the second half, the pendulum started to swing in favour of the away side, with United having to face a barrage of crosses and set pieces in the early stages. The backline dealt with this pressure incredibly well, in particular Jamie Robson, who somehow managed to clear a dangerous Aribo cross over his own crossbar from point-blank range. Benji Siegrist was tested for the first time on the 57th minute after a quiet afternoon between the sticks, spectacularly beating away a long-distance Tavernier effort that was destined for the postage stamp. Seven minutes later, United got their just rewards for an outstanding display and opened the scoring to stun the Champions. Ian Harkes intercepted a menacing looking pass towards Morelos from Kent and the ball fell to Butcher. An uncharacteristic Cruyff turn from the combative midfielder allowed him space to pick out Robson in the left-back area, who shifted the ball forwards to substitute Spörle. The Argentinean darted inside towards Davis and cannoned a pass off the Rangers man from point-blank range, which fell perfectly into the path of Jamie Robson to stab the ball past the helpless McLaughlin from 10-yards into the corner, sparking scenes of jubilation amongst the Arabs in the stands – the first league goal celebrated at Tannadice since Dillon Powers’ thunderbolt against Partick Thistle on the 7th of March 2020. A slightly shell-shocked Rangers took nearly 10 minutes to respond to the goal but were inches away from an equaliser when they concocted that chance. Tavernier flashed a corner across the near post which found the advancing Goldson who rose above Mulgrew to head wide of Siegrist’s right upright, a lick of paint away from levelling the score. United’s game management in the latter stages of the match was exemplary, happy to either keep the ball under intense pressure or surrender possession to their opponents and force them into the channels, before suffocating the space and winning possession back. The visitors continued to struggle with chance creation and, after a predictable 5 minutes of injury time, Don Robertson’s whistle sounded to secure a famous victory for Tam Courts’ tangerine army and inflict Rangers’ first league defeat in 41 matches. A deserved result for Arabs who’d gone over 16 months without seeing their team win in the flesh.