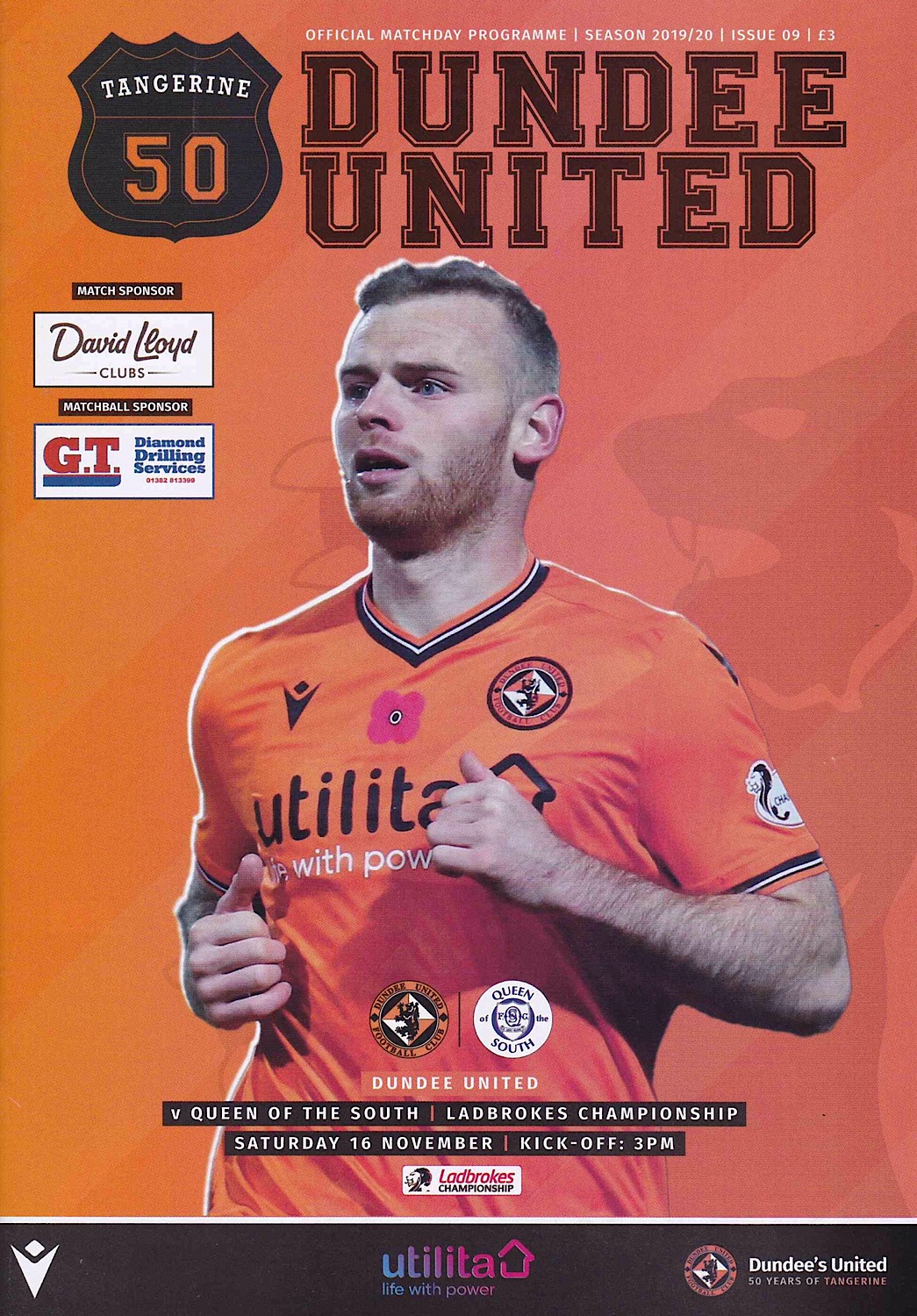 United went into today’s game sitting six points clear at the top of the SPFL Championship after last week’s 2-0 victory over neighbours Dundee. Goals from Clark and Shankland had earned United their fourth win on the trot along with four clean sheets. United would be without Shankland for today’s game, with the striker on international duty with Scotland for the upcoming games against Cyprus and Kazakhstan. Manager Robbie Neilson made one change with Stanton replacing Shankland in the starting line-up and Mochrie taking Stanton’s place on the bench.

United kicked off attacking the Eddie Thompson stand and had their first corner inside thirty seconds. The resultant set-piece was easily cleared by Queens.United’s first chance came in the seventh minute when Appéré was sent clear by Harkes. The youngster’s run on goal was only narrowly thwarted by McCrorie in the Queen’s goal. United continued to press and were having the bulk of the possession in the opening twenty minutes of the game. McMullan was the main protagonist looking for an opening in the Doonhamer’s defence. It was McMullan who broke the deadlock for United in the twenty-second minute. Great work by Appéré down the right wing and his weighted pass was easily slotted home by Paul McMullan. Just rewards for a player celebrated before the game for recently passing the one hundred appearance mark for United. Queen of the South came close to equalising in the thirty first minute when Murray was played through on goal. Despite being clearly offside, he slid the ball past Siegrist and the Assistant Referee corrrectly raised his flag. The enthusiasm of Appéré almost paid dividends in the thirty seventh minute when his run on goal took him past two Queens defenders down the right side of the box. Only the oncoming McCrorie prevented Appéré from scoring. It was dazzling quick feet by the strong striker and he was unlucky not to finish off what would have beena sensational goal. United finished the first half on a high with a succession of corners, set-pieces and plenty of possession. Just as it looked like United would have to wait until the second half for the all important second goal, up stepped Nicky Clark to finish off a fine move, McMullan’s sublime pass finding Clark on the run down the middle of the park to slott past McCrorie in the Queens goal. 2-0 to United and a score line befitting of the way United had dominated the game in the first half.

It didn’t take United long to increase their lead at the beginning of the second half. In the forty-ninth minute, the ball broke to Stanton twenty yards out. Sam Stanton took on the first wave of defenders he found himself through on goal and calmly slotted home to make it 3-0 United. United were rampant now and almost made it four five minutes later. A cross from Appéré found Clark as he ran into the box. His shot just didn’t have the legs to find its way past McCrorie who was on hand to save. United continued to control the game and were only being thwarted by some tough tackling from the away side. Referee Collum choosing to let the game continue rather than discipline the offenders, much to the dismay of the United fans. On the back of four clean sheets, United’s defence continued to look impenetrable, Watson, Reynolds and the ever reliable Siegrist showing why they’ve looked solid at the back in the last month. A rare opportunity for Queen of the South came in the eightieth minute when a corner was met perfectly by Brownlie in the centre of the box, the Queens player’s header just going narrowly wide past Siegrist’s left hand post. United continued to look impressive in the closing stages and the passing in midfield in particular kept the home side in control. As the clock ticked down, United we’re keeping Queens up their end of the park and introduced Academy Graduates Logan Chalmers (19) and Chris Mochrie (16) alongside fellow Academy Graduate Jamie Robson. As the whistle blew for full-time, manager Robbie Neilson can be pleased with his team’s professional performance. Three goals, another clean sheet, outings for Chalmers and Mochrie and a chance to show there is more to United than just Lawrence Shankland. 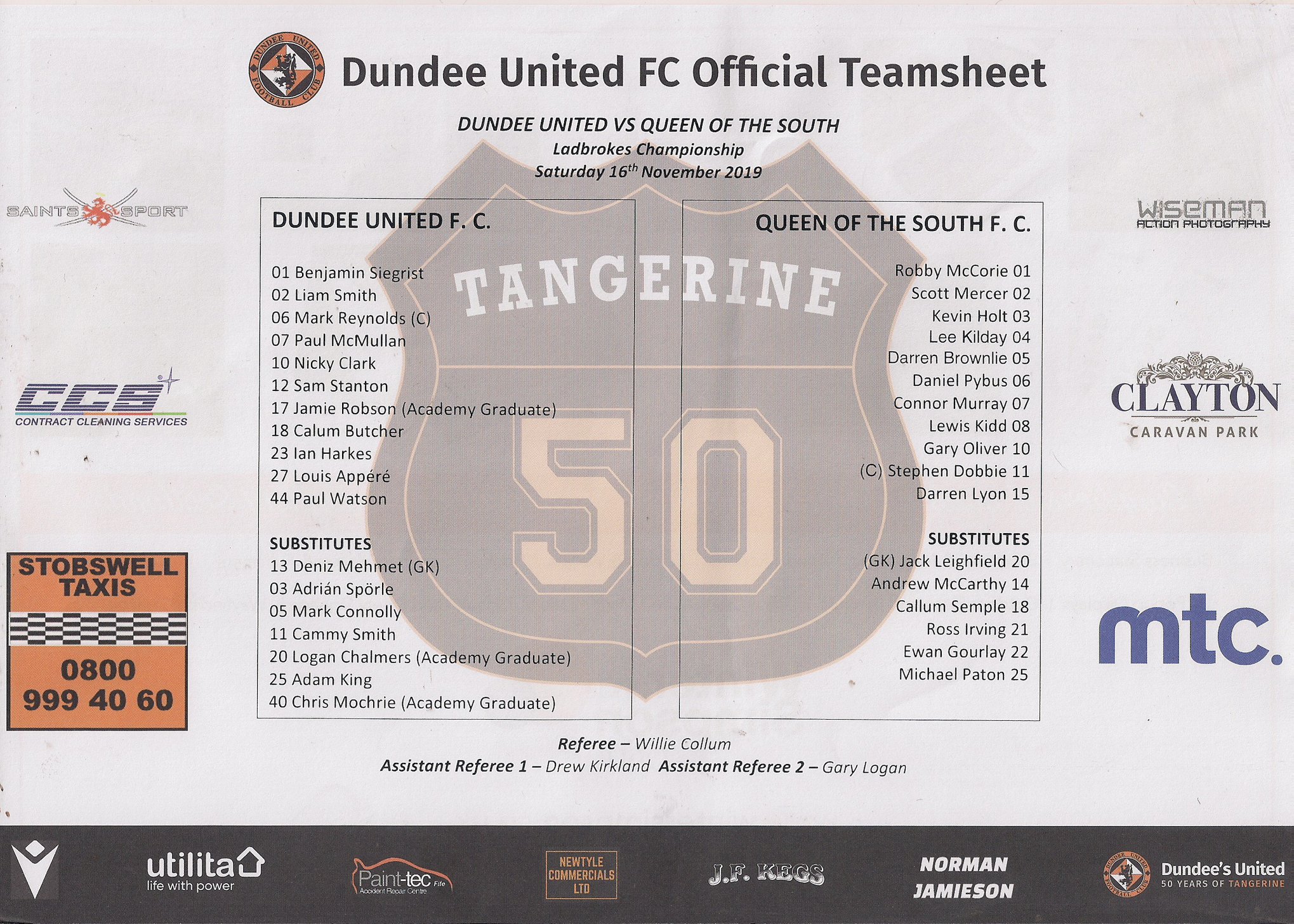 With four wins on the bounce, our recent form going into this afternoon's game is really pleasing, but it is essential we win the next game. Having won ten of our 13 games, it has been a really good start and the three reversals we have had have all been at difficult venues -- Ayr United and then on the Astro turf at Alloa and Queen of the South. Those were tough games, but so were the last two at Inverness and across the road at Dens, both of which we won. At that last game against Dundee, we had a phenomenal 4,000 fans which helped push the players forward. Hopefully, we'll have an other big crowd behind us again this afternoon because it is important that everyone continues to bring that energy to the place so that the players, with the fans' backing, can deliver another three points. Obviously, we have one enforced change given Lawrence Shankland's absence on international duty, but we have been delighted with Nicky Clark's contribution since he came back from injury. He has been scoring goals and creating goals and is important for us and I hope that he can continue doing that this afternoon.

Our home form has been very good and we hope to continue that against Queen of the South. They are a very good team with very good players, like Hamilton and Dobbie, who caused us a lot of problems in the last meeting. They have a lot of quality and are well organised and Allan Johnston has got them playing really well and looking to push for the play-off positions.Therefore it is important that we get ourselves ready for the game and get at them.This is one of some good games coming up for us with Morton away, Alloa home and Arbroath away before two hard home games against Ayr United and Dundee over the festive period. It is a tough, tough schedule with both trips to Cappielow and Gayfield hazardous ones, plus the visit ofAlloa who defeated us in the first meeting. But as I have said so often, all the games in this league are difficult, so taking one game at a time is essential. Following today's match, we have a break next weekend as we are not involved in the third round of the Scottish Cup, so picking up another three points would put us in a strong position for the remaining fixtures before the New Year. Whilst the icing on the cake in the last four games has been keeping clean sheets, we cannot overlook the fact that we lost four goals to Queen of the South a month ago. In games like this afternoon, the fans are so important. When teams come here, it is a big game for them and they'll try and get the atmosphere dulled down, hence we need that energy from the fans in the stands and the players on the pitch to help us continue our winning streak.