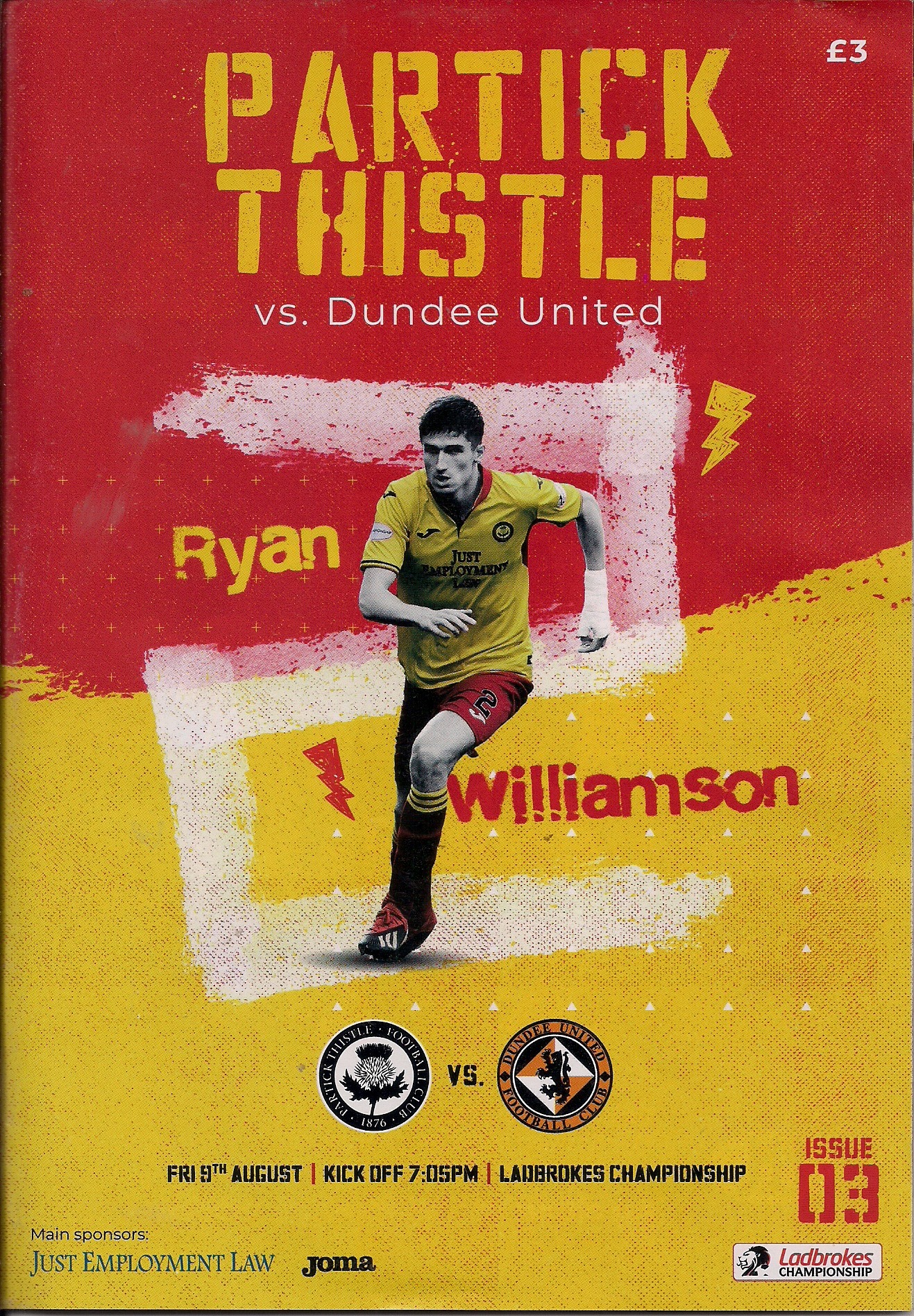 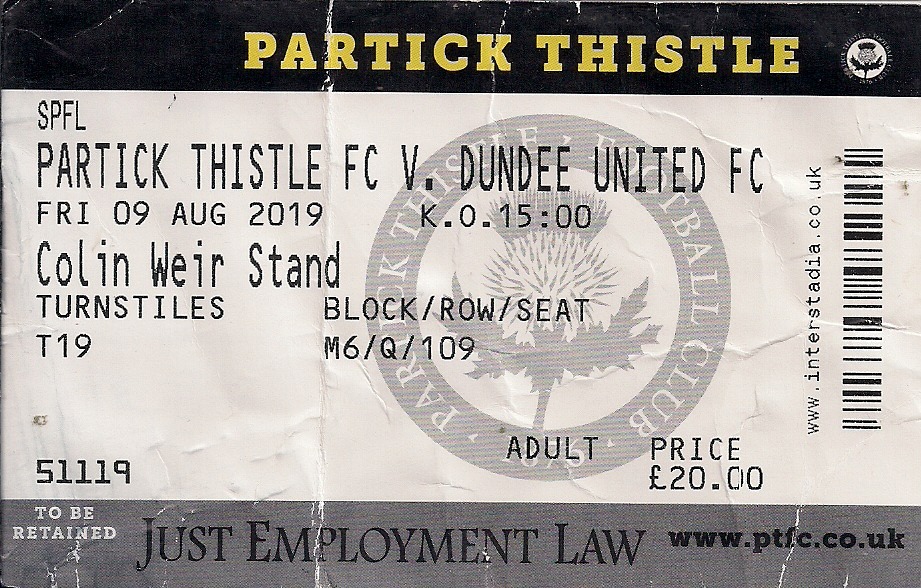 Following United’s emphatic victory over Inverness CT on the opening day of the season, confidence was high among players backed by another healthy and noisy United support. After a day of fairly constant rain, the skies had cleared for the start of the second Ladbrokes Championship game of the season.

United started on the front foot with Stanton forcing a save from Sneddon within the first minute, as United aimed to stamp their dominance on the game. However, Thistle also showed some early intent with a quick breakaway, leading to a corner and a resultant Robson header over the bar. As the game swung from end to end, United continued to look dangerous in attack, with Shankland, Appere and McMullan all causing the Thistle defence problems. However, following a couple of challenges from United, referee Collum decided enough was enough, booking Connolly for a pull back as Thistle broke from defence. McMullan then had a chance as he raced away from the Thistle defence, and seeing the keeper out of position shot narrowly past the near post. On 23 minutes, Thistle took the lead against the run of play. A good run and cross down the right by Palmer evaded everyone in the six yards box, other than Steven Saunders waiting at the back post to head home. For the remainder of the first half, United struggled to regain their composure, with Thistle clearly lifted by the goal. Indeed, Thistle almost made it two in 38 minutes, with Siegrist pulling off a vital close range save from Jones. As the referee blew for half time, United would reflect on how their early promise had been negated by an energetic Thistle side who deservedly finished the half 1-0 up.

United started the second half like the first, this time pressing for an equaliser and after 55 minutes it arrived, from who else but Lawrence Shankland. A deep cross from McMullan on the right was met on the volley by Lawrence Shankland, hitting into the ground and over Sneddon’s outstretched hand. It was United who were now on the front foot, with Nicky Clark’s shot deflected for a corner. Siegrist then came to the rescue for United saving at point blank range from McGinty as the game again swung from end to end with both teams desperate to secure the points. McMullan was next to impose himself, racing down the right and putting a teasing cross into the six yard box. Unfortunately for United, there were no takers. United were playing some great stuff now and deservedly took the lead in 73 minutes, with huge credit to Jamie Robson in the build up. After winning the ball in midfield, he darted up the left, collected a knock down from Appere and drove into the box. His cut back found Lawrence Shankland, who stuck out a foot to guide the ball past a despairing arm of Sneddon before Peter Pawlett, only on the pitch a matter of five minutes, forced the ball over the line before the Jags defender could clear. Thistle weren’t finished yet though and won a freekick on the edge of the box in a dangerous position. The United wall did its job though and the danger was averted. On 87 minutes, United almost tied up the points, following a multi-pass move, McMullan slid a lovely pass though to Pawlett, whose scooped shot went just over the bar. There were to be no more scares for United and ‘Country Roads’ rang out from the United support as the three minutes of injury time were played out. A superb second half fight back was complete, as referee Collum blew for full time with United 2-1 victors and cementing their place at the top of the league at this early stage of the season. 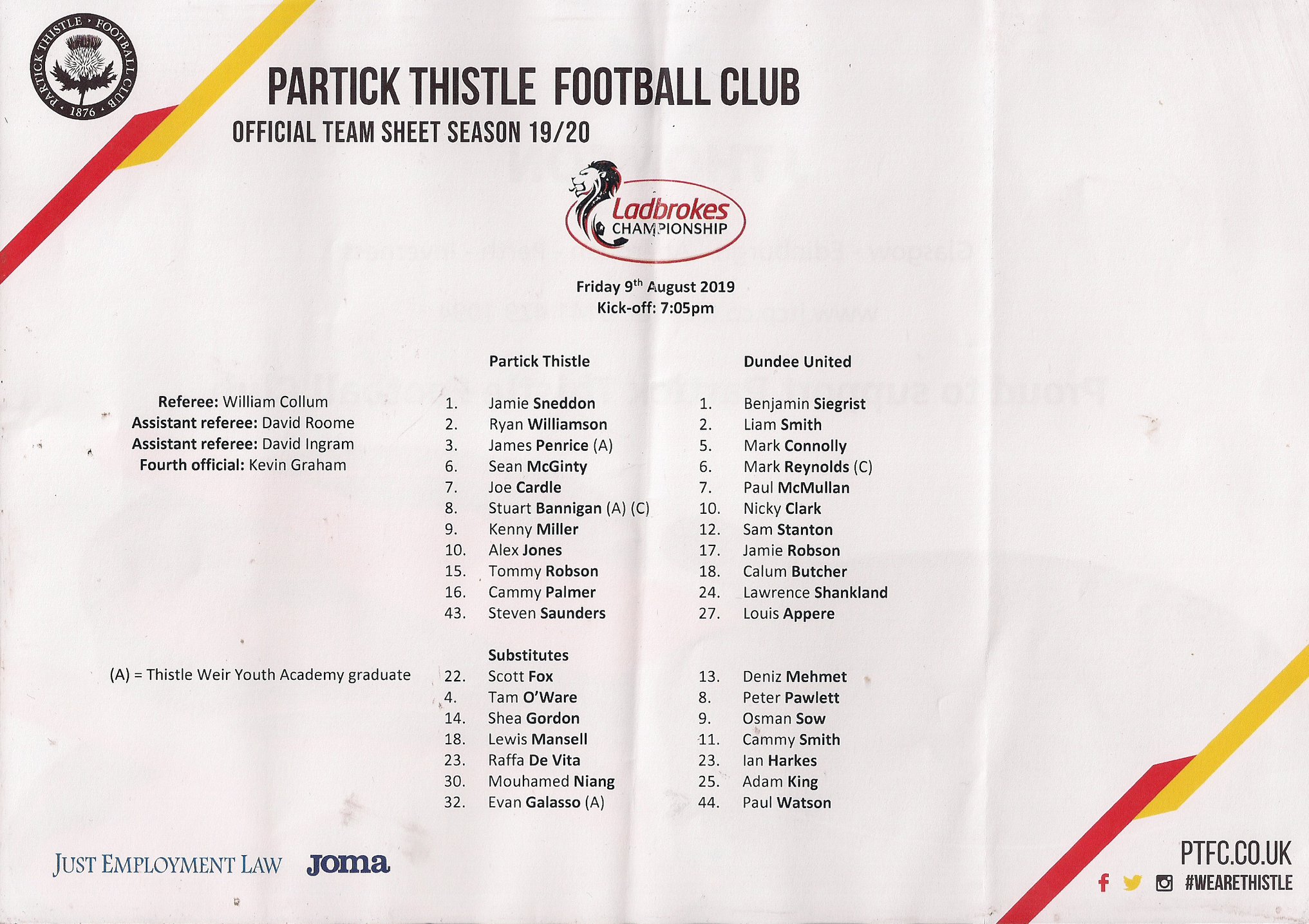