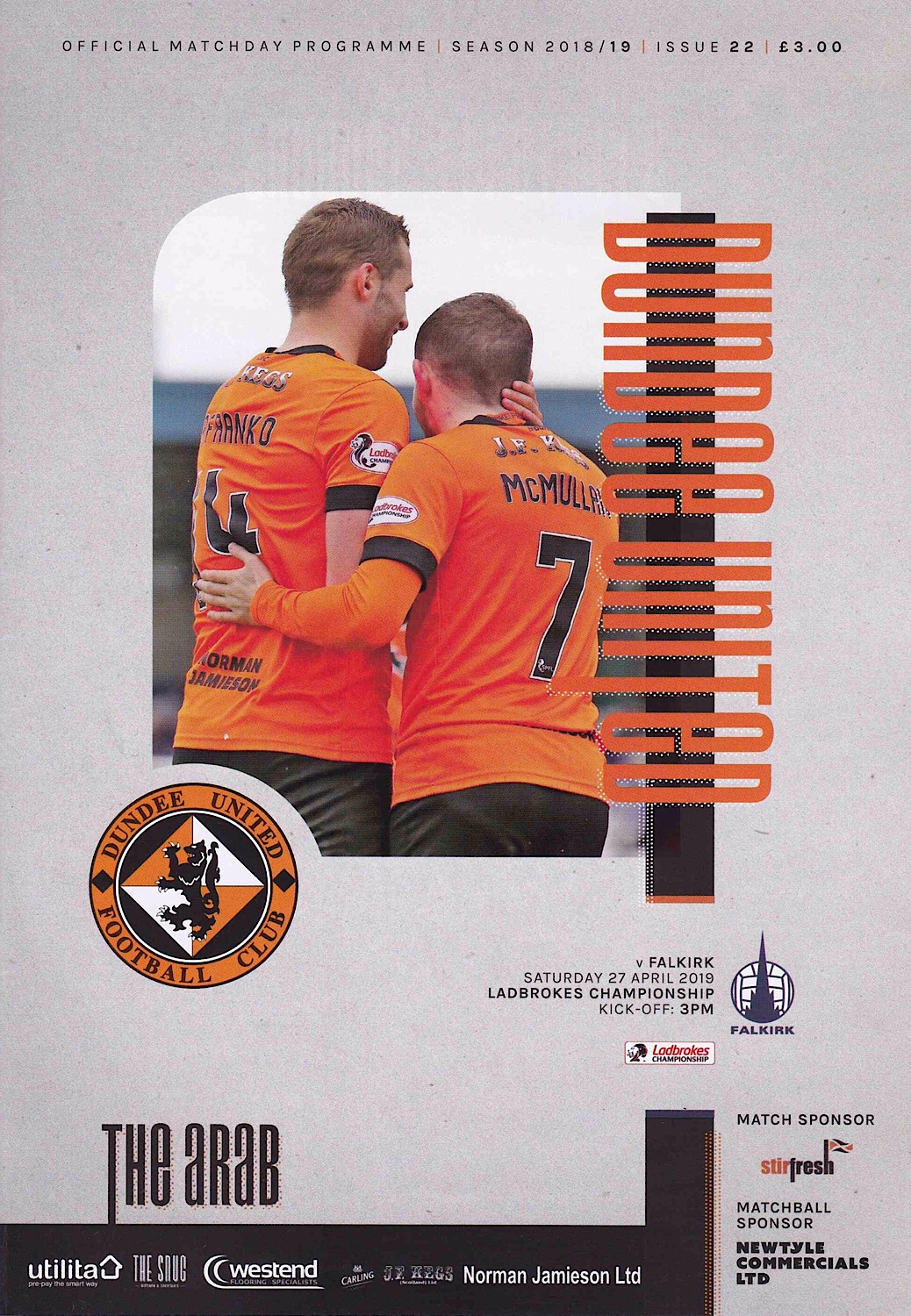 United’s final home game in the regular season ended with a 2-0 victory over relegation threatened Falkirk at Tannadice. After Ross County’s 4-0 win over Queen of the South the previous night, the Staggies had clinched the Scottish Championship and United’s league chances, as remote as they were, ended. Although the game was meaningless for United with second place already sealed, the same could not be said for their opponents, who knew any result other than a win would go a long way towards ensuring their relegation from the Championship. In fact, depending on results elsewhere the Bairns could have ended the day relegated to League One.

Despite the fact that this was a meaningless game for Dundee United, head coach Robbie Neilson made only three changes from the team which had won in Inverness the previous week. Rachid Bouhenna, Osman Sow and Callum Booth all returned to the starting line up, with Nicky Clark dropping to the bench and Peter Pawlett and Mark Connolly dropping out of the match day squad altogether.

After a fairly even start it was the home side who had the first chance when former United defender Paul Dixon was caught in possession by Ian Harkes when trying to play the ball out from the back. Harkes passed the ball to Osman Sow and the former Hearts striker curled an effort towards the top corner which was well saved by Falkirk goalkeeper Harry Burgoyne. The Falkirk keeper made another good save a few minutes later when a Paul McMullan corner was headed towards goal by Mark Reynolds, but despite a deflection which saw the ball loop into the air Burgoyne was equal to it and tipped the ball over the bar. However, that save only delayed the inevitable as Dundee United took the lead from the resultant corner kick. Paul McMullan sent the ball over from the right and Rachid Bouhenna glanced a header past Burgoyne and into the net for his first Dundee United goal.

Falkirk had not really been in the game until this point but they did almost equalise a couple of minutes later. Jordan McGhee broke down the Falkirk right and sent a cross into the box which found Davis Keillor-Dunn at the back post, but he could only head the ball over the bar from four yards out with an open goal in front of him. The Falkirk players did claim that Zak Rudden had been fouled in the middle of the penalty box as the ball came over, but the referee did not agree.

United were continuing to make most of the running, and another Paul McMullan delivery caused chaos in the penalty box, with the ensuing scramble seeing the ball cleared off the line three times as United tried to double their lead. Harry Burgoyne saved from Rachid Bouhenna before Mark Reynolds and Pavol Safranko saw shots cleared off the line by Paul Dixon and Ian McShane respectively.

A second United goal seemed almost inevitable, and it duly came in the 25th minute. Pavol Safranko latched on to an Ian Harkes pass on the left of the Falkirk penalty area and cut the ball back to Paul McMullan who was on his own on the penalty spot, and he stroked the ball home for his third goal in three games. It was no less than United deserved.

Four minutes later a shot from Pavol Safranko was saved by Burgoyne, and not long afterwards Falkirk had another chance through Davis Keillor-Dunn, who met a Thomas Robson cross ten yards out but Ben Siegrist was able to make the save. It should have been 3-0 with ten minutes to go until half time when Calum Butcher hit a shot from 30 yards out which Harry Burgoyne could not hold on to. From the follow up Paul McMullan could only head the ball over the bar with the goal gaping. The half ended with a scare for United when a Jordan McGhee header from a corner kick hit the post, but otherwise United saw the first half out comfortably for a deserved 2-0 lead at the break.

The first chance of the second half came for the away side when Davis Keillor-Dunn headed a Jordan McGhee cross straight at Ben Siegrist. The same player made a jinking run towards goal a few minutes later, and he was able to fashion himself some space in the United penalty area but his low curling shot was well saved by Ben Siegrist. There was a distinct drop in intensity from United in the second half, perhaps unsurprisingly given that the game was almost won at this point, and also considering there were more important games on the horizon for them. Very little occurred in the game until United made a triple change on the hour mark, with Paul McMullan, Osman Sow and Ian Harkes being replaced by Nicky Clark, Sam Stanton and Logan Chalmers. Clark almost scored within a minute as he hit the side netting with an angled drive from a Logan Chalmers knock down. Falkirk were not entirely out of the game, and there was a warning to United that the game was not done and dusted midway through the second half when Ross MacLean advanced through on goal, and shot straight at Ben Siegrist when passing to the better placed Zak Rudden was probably the better option.

There were very few chances in the rest of the game as United held on rather comfortably against their dispirited opponents. They had a chance to grab the third goal with ten minutes left but Paul Watson could only hook his shot from a Logan Chalmers corner kick over the bar. Nicky Clark had another chance a few minutes later but his low drive went wide of the post.

Falkirk did think they had scored a consolation goal in the second minutes of stoppage time when Zak Rudden finished after Jordan McGhee had headed Tommy Robson’s cross back across goal, but the on loan Rangers player was ruled offside and United had their second consecutive 2-0 win. Thanks to Inverness coming from behind to beat Alloa Athletic 2-1, Falkirk’s relegation was not quite confirmed, the result leaving the Bairns three points behind Alloa with one match left. United were safe in second place with only a trip to Greenock to face Morton left before the serious business of the end of season playoffs.