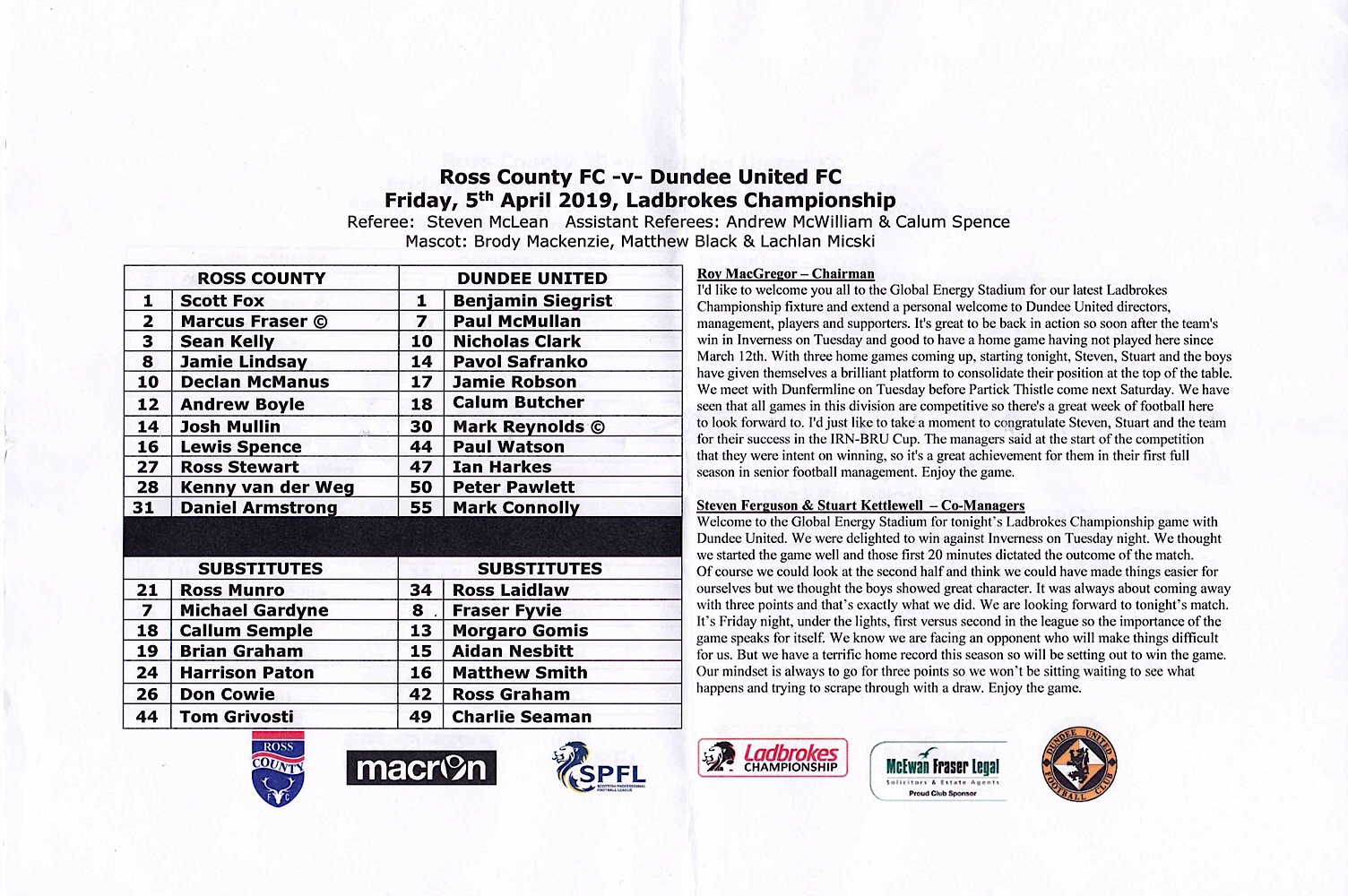 Photography by The Courier

United went into their crucial Friday night game away to Ross County knowing that anything less than a win would see their hopes of winning the Scottish Championship evaporate. United went into the game five points behind their opponents having played a game more, with a mere five games left to play. United had won 1-0 in the two games between the sides since Robbie Neilson took over as United head coach, but of course Ross County had beaten United 5-1 in October in what was Csaba Laszlo’s last game in charge. In addition, United had been the only side to beat Ross County in Dingwall this season with that 1-0 win in November.

Neilson made four changes from the side which lost to Queen of the South so disappointingly in United’s last game, with Mark Connolly, Ian Harkes, Paul Watson and Peter Pawlett coming in for Callum Booth, Sam Stanton, Rachid Bouhenna and Charlie Seaman.

Sean Kelly had the first effort on goal in the first minute of the game, but his shot from outside that area went high and wide. United’s first threat was a Paul McMullan break down the right after Kenny Van Der Weg was beaten by a bounce of the ball, but from the resultant corner kick the ball never quite fell for a United player, and eventually Safranko’s effort was saved easily by Ross County keeper Scott Fox. Ross County broke up the park through some strong running from Declan McManus and Ian Harkes did well to charge down a shot from outside the area from Josh Mullin. An ambitious chip from distance from Calum Butcher in the eighth minute caused no trouble for Fox. A minute later, Ben Siegrist was called into action at the other end when a good driving run ended with the former Raith Rovers player hitting a low shot from out wide that Siegrist got down well to parry wide for a corner kick. Despite a couple of excellent corner kicks from Josh Mullin, United were able to hang on.

United got the vital opening goal after 12 minutes through some slack play from the home side. Scott Fox was perhaps too casual as he tried to take on Paul McMullan on the edge of his own area, and his clearance to Andy Boyle forced the central defender into trouble. He was robbed by Ian Harkes, who passed the ball to Pavol Safranko. The striker took one touch and smashed the ball past Fox at this near post from 15 yards out to give United the lead.

United continued to look a threat on the break, and four minutes after the goal Paul McMullan was able to break down the United right. His cross found Peter Pawlett, but he was crowded out by home defenders and Jamie Lindsay was able to rob him of possession before he could get a shot away. At the other end, Jamie Robson was robbed of possession while attempting to shepherd the ball out of play. But luckily the cross from Josh Mullin found no takers in the middle.

Paul McMullan, who had signed a new contract with United the day before the game, was the next to try his luck from just inside the area, but Kenny Van Der Weg was able to make the block. The Dutchman was called upon again to get a desperate touch on a superb low cross from Peter Pawlett, which could have gone anywhere but ended up being deflected wide for a United corner. McMullan had a shot from the corner of the penalty box which was deflected wide for another corner, which Scott Fox was able to claim to relieve the pressure on his side.

After some good play from Pawlett and McMullan on the right, Nicky Clark tried a rather ambitious shot at goal, but his volley from the corner of the penalty area swung well away from goal. Clark then won a free kick on the halfway line after being barged by Jamie Lindsay, a decision which enraged the Ross County co-manager Stuart Kettlewell. However, the free kick which was floated to the back post came to nothing. After half an hour, United were in control of proceedings.

Paul McMullan was continuing to cause havoc on the United right, and another cross was desperately scrambled clear by the Ross County defence after 36 minutes. However, Jamie Robson was then caught in possession on the halfway line which allowed Declan McManus to drive towards goal. The former Dunfermline striker’s shot was wasteful, and the ball ended up with the fans behind the goal.

A cross from the left from Josh Mullin a couple of minutes later caused havoc in the United defence. The ball was half cleared to the edge of the area, and Marcus Fraser smashed in a low shot which had to be blocked by Mark Reynolds. The home side peppered the United area with crosses as the first half drew towards its end, but the United defence held firm. They could have doubled their lead with a couple of minutes left in the half, when a through ball from Pavol Safranko was not cut out by Andy Boyle. The ball went through to Paul McMullan, who broke into the box and fed Peter Pawlett with a lovely reverse pass. Pawlett hit the shot first time but it was straight at Scott Fox, although the Ross County keeper did well to deflect the ball wide.

Ross County kicked off the second half with neither side making any changes at the break. The first few minutes of the half passed without incident, until Lewis Spence picked up the first booking of the night for a crude foul on Paul McMullan. The resultant free kick from Mark Connolly was cleared. United won another free kick a couple of minutes later after a clash of heads between Pavol Safranko and Jamie Lindsay. The free kick from Peter Pawlett was floated into the Ross County box and briefly looked threatening, but eventually went through to Scott Fox.

Jamie Lindsay recovered from his head knock, and minutes later floated a lovely diagonal ball to Josh Mullin, who cut inside but saw his shot blocked by Mark Connolly. Calum Butcher was booked soon afterwards for a foul on Lindsay. Daniel Armstrong then became the next player to be booked for a cynical foul on Peter Pawlett as United tried to break. Paul McMullan was played through on goal by Pavol Safranko just after the hour mark. It was a great chance, but the winger’s shot from 16 yards out was wild and went high over the bar. The game was getting a bit scrappy at this stage with both sides struggling to keep possession, which suited the away team as they were the ones with a lead to defend. Ross County had brought on former United players Brian Graham and Michael Gardyne in an attempt to salvage something from the game. United had the ball in the net in the 67th minute, but the referee’s whistle went for a foul on Scott Fox before Paul Watson lashed the ball into the net.

In the 73rd minute Paul McMullan had another great chance when Ian Harkes played the ball in to him in the Ross County penalty area, but his shot was blocked. A minute later, Jamie Lindsay found himself in a good position on the edge of the United area but his shot lacked both power and direction and bobbled wide of the post. A long ball from Ross County caused trouble for Jamie Robson as he struggled to deal with the situation, although in combination with Ben Siegrist he was eventually able to snuff out the danger and the ball went out for a goal kick.

With twelve minutes left, Paul McMullan had yet another chance to get the second goal. He twisted and turned in the penalty area and hit a shot across Scott Fox from a tight angle that the Ross County goalkeeper did brilliantly to parry on to the post and away from danger. Ross County had a great chance of their own with six minutes left when Ben Siegrist was outjumped by Brian Graham while trying to claim a headed backpass from Mark Connolly near the bye line. The ball broke to Josh Mullin in the middle of the goal, but under pressure from a couple of United defenders, he sclaffed his first time shot and the ball trundled wide.

The tireless Paul McMullan was substituted with a minute remaining after a challenge by Sean Kelly saw him injured, and he was replaced by Matty Smith. Morgaro Gomis came on for Peter Pawlett at the same time as United tried to see the game out. The away side were getting deeper and deeper, and were punished in the fourth minute of stoppage time. United failed to clear a corner kick, and Michael Gardyne broke into the penalty area. He hit a low ball that Ben Siegrist could only parry to Ross Stewart. He squared the ball to Jamie Lindsay/b>, who smashed the ball into the net from 10 yards out to level the game and realistically end Dundee United’s title challenge. United forced a corner from kick off, but Ben Siegrist committed a foul when the ball was sent in and the game ended 1-1. The late goal was a blow, and left United looking at the prospect of playoffs for the third straight year in their attempts to escape the Scottish Championship. 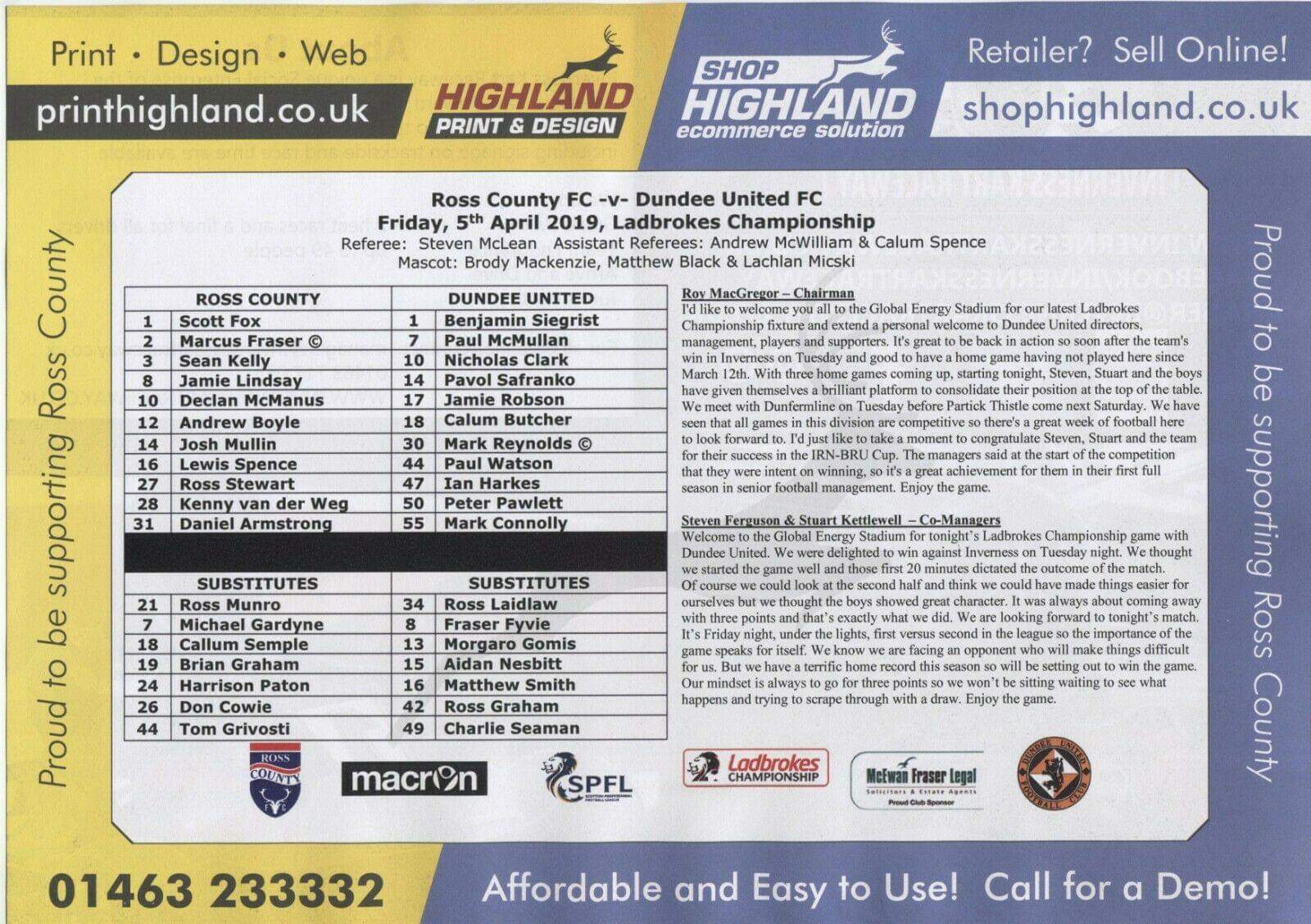