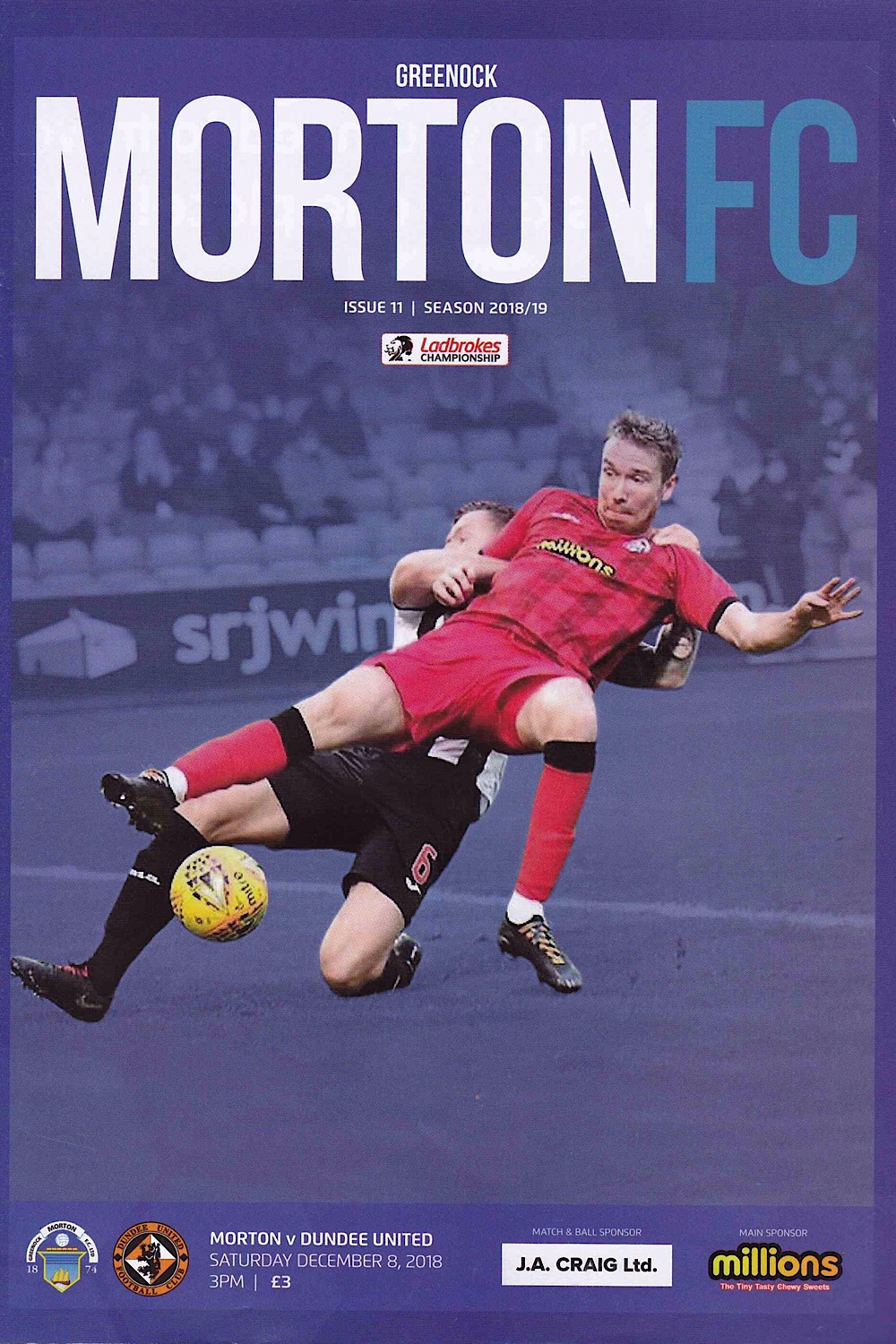 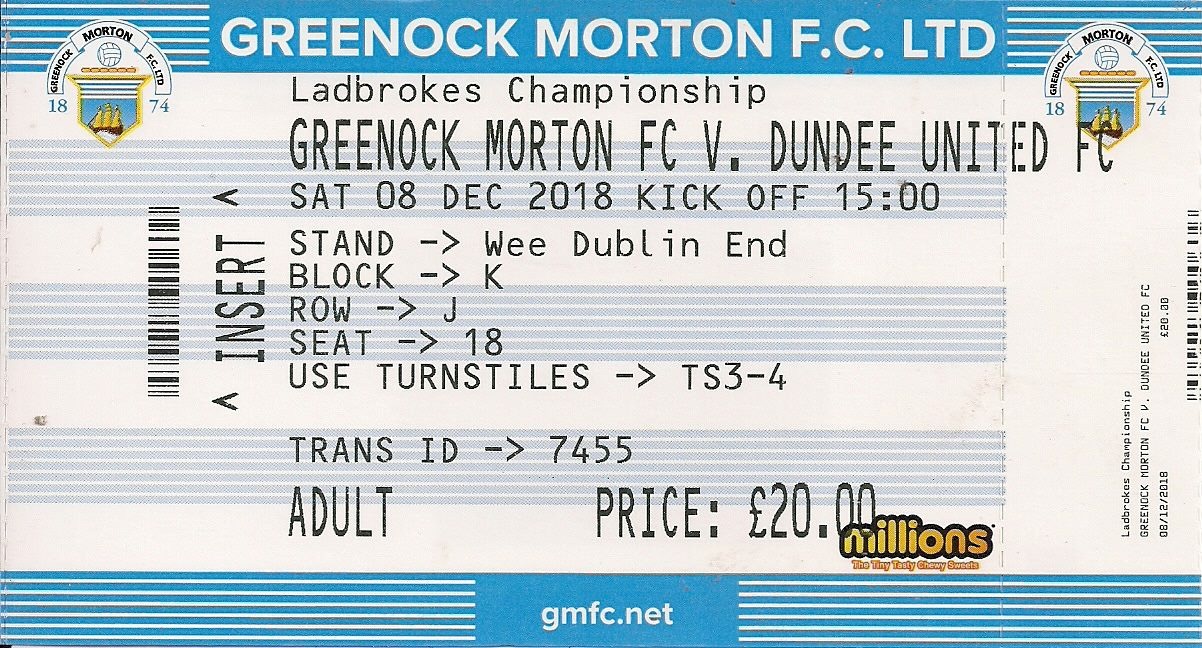 A late error from Dundee United goalkeeper Matej Rakovan meant that the Terrors had to settle for a point in a 1-1 draw with Morton at Cappielow.

Off the back of United’s humiliating 5-0 defeat against Ayr United in their previous game, head coach Robbie Neilson made four changes to the starting line up from that game. Goalkeeper Ben Siegrist was still injured, so Matej Rakovan started the game in goal. In addition, Stewart Murdoch, Frederic Frans and Craig Curran all returned to the starting line up, replacing Paul Watson, William Edjenguele and Billy King, all of whom struggled to some degree against the Honest Men. Dundee United had the chance to reduce the gap to the league leaders after Ayr United’s game against Inverness the previous night fell victim to the weather.

Morton had themselves come off the back of a bad defeat against Dunfermline Athletic, so both sides were in need of a confidence-boosting win. Perhaps reflecting the bad results both teams had suffered in the previous week, the early stages of the game were tense and cagey with neither side seeming to want to fall victim to a bad start, a situation not helped by the game taking place in horribly wet and windy conditions. It took a full ten minutes for either side to fashion a chance, and even then the goal was not really threatened as a first time shot from the right hand side of the penalty area from Craig Curran went a long way wide of goal after he had been played in by a through ball from Paul McMullan.

United were trying to play passing football, but a combination of the conditions and their effervescent opponents was making that difficult. The home side had their first chance after 13 minutes through former United player Robert Thomson, but the striker could only hit a left footed shot wide despite being in acres of space in the United penalty area. Morton were able to force a series of corner kicks following that chance, although none of them led to direct shots on goal as United were able to repel any threat. The away side had more or less abandoned any attempt at passing football and were playing a much more direct style.

Midway through the first half, another former United player made an impact on the game, although maybe not in the way he would have wished as Reghan Tumilty was booked for a foul on Pavol Safranko. Chances continued to be at a premium during the first half as neither side could really get a grip on proceedings. However, out of nothing Dundee United grabbed the lead just after the half hour mark. Fraser Aird floated a free kick from out wide into the Morton penalty area Frederic Frans sent a looping header over Morton goalkeeper Derek Gaston for his first league goal for Dundee United.

The goal did not settle the game down in any way, with the remainder of the first half being played at a frantic pace with the play raging from end to end, although the lack of decent chances did continue. Fraser Fyvie became the first United player to be booked three minutes from half time after a foul on Rory McKeown, before Charlie Telfer nearly scored against his former club when a fierce shot from a tight angle went just over the crossbar. The first half ended with United holding a narrow lead.

United began the second half well, with Fraser Aird seeing a shot going just over the crossbar in the first couple of minutes of the half. The game continued to lack any real flow, with play repeatedly being broken up by niggly fouls.

As the half drew on, the home side began to dominate proceedings as they tried to force their way back into the game. In the 50th minute they were perhaps slightly unlucky to see a goal from Reghan Tumilty ruled out for a marginal offside, after United’s defence was carved open by some good interplay between Robert Thomson and Michael Tidser. Within a minute, veteran Chris Millar hit a dipping effort just wide of Rakovan’s goal after racing onto a Thomson knockdown.

On the hour mark, Morton signalled their intent by making a positive chance by replacing midfielder Charlie Telfer with the more attacking Bob McHugh.

The next chance fell to the away side, however. Fraser Aird was very close to picking out Pavol Safranko in the penalty box, although the Slovakian striker was ruled to have been in an offside position. With twenty minutes to go, goal hero Frederic Frans nearly turned villain as a mishit pass looked like playing Bob McHugh in on goal, but luckily for the Belgian defender McHugh could only shoot straight at Matej Rakovan.

Morton continued to put the pressure on the United defence, and with fifteen minutes left former Dundee player Jim McAlister became the latest player to threaten. He latched on to a knockdown from Robert Thomson, but the midfielder could only stab a shot wide of the post.

Morton got the equaliser they deserved with twelve minutes left to play, although Dundee United were again the architects of their own downfall. Callum Booth gave away an unnecessary free kick on the United left and Michael Tidser floated the ball into the penalty area. Matej Rakovan raced from his line to try and punch the ball clear but missed the ball completely. Gregor Buchanan was standing a couple of yards behind the stricken goalkeeper, and had the simplest of tasks to head the ball into an empty net to give the away side the equaliser.

Neither side could grab a winning goal in the final ten minutes, and both sides seemed rather frightened to force the issue, perhaps mindful of not wanting to lose the game. The tension spilled over to the dugouts, with Robbie Neilson being sent to the stands late on by referee David Scott. Billy King did spurn a great chance to win the three points for United with five minutes remaining after being played through on goal, but his shot was charged down by Derek Gaston, ensuring that the game would remain level, a rather unsatisfactory outcome for both teams. 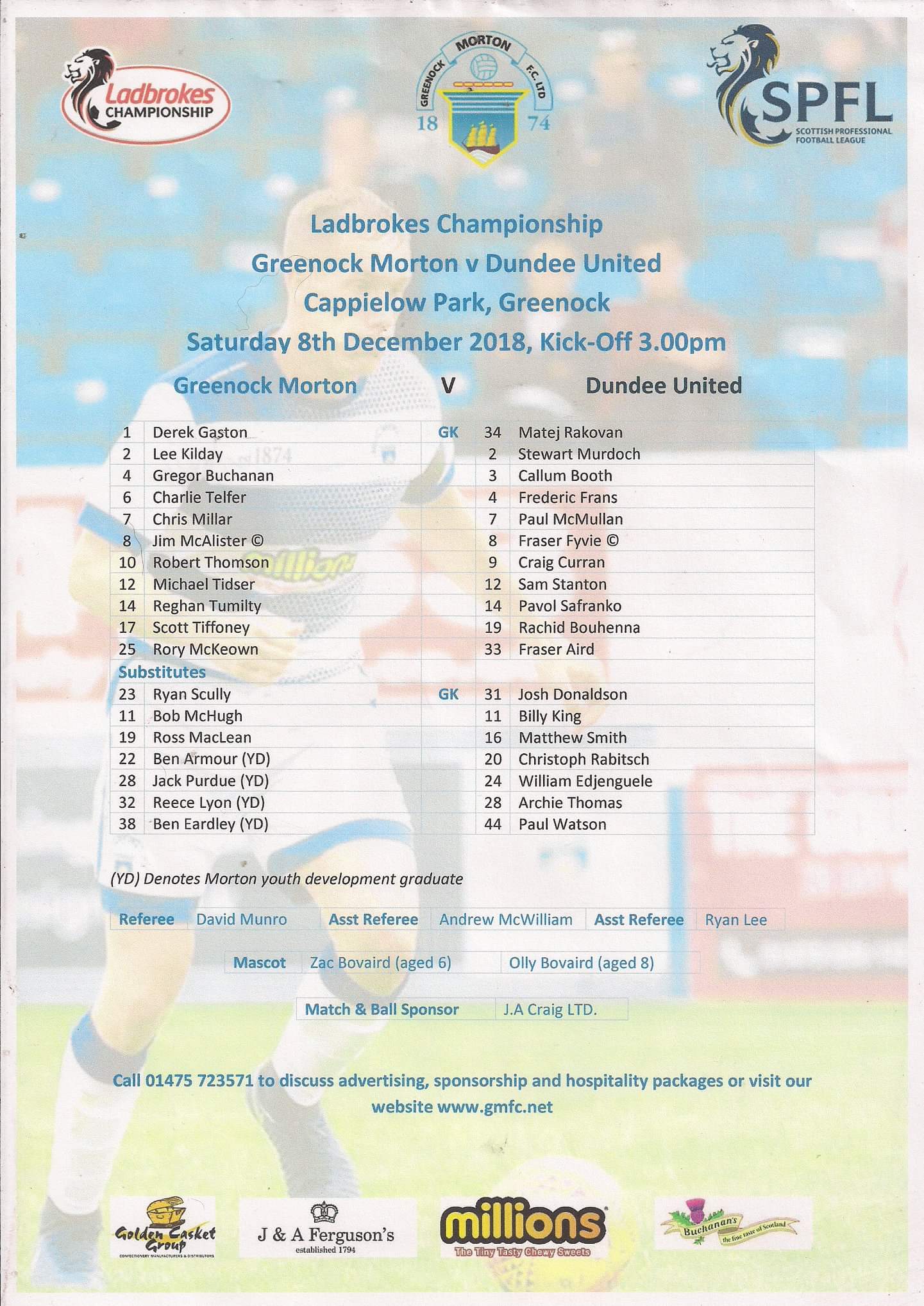