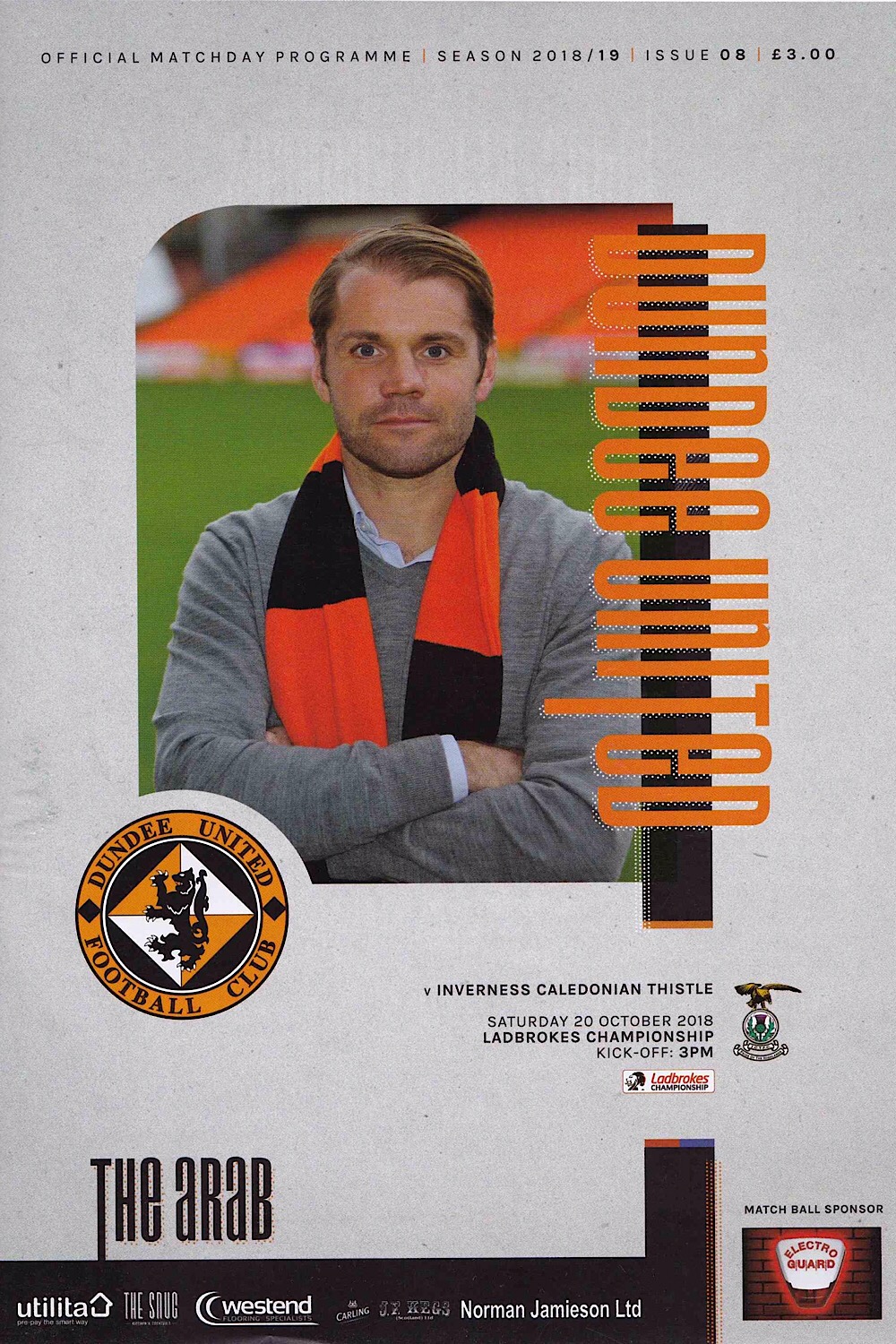 Robbie Neilson’s first home game in charge of Dundee United saw an entertaining 1-1 draw with Inverness Caledonian Thistle. Against opponents who had not lost a league game since the 13th of March, United largely dominated the game and would have won easily if not for a combination of resolute defending and wayward finishing.

There was only one enforced change from the team which had beaten Partick Thistle 2-1 in United’s previous game, with Stewart Murdoch returning from suspension to replace the injured Paul Watson.

The game started at a frantic pace, and that did not let up at any stage during a breathless first half. Despite that, chances were at a premium in the early stages. The away side had the first chance after six minutes after a Liam Polworth cross which was blocked by Frederic Frans just before Inverness striker Jordan White was able to get there.

Aside from a dangerous Billy King cross which was well cleared by Coll Donaldson in the 15th minute under pressure from Pavol Safranko, there was no further goalmouth action in the first 20 minutes as both teams struggled to keep possession. As the half drew on, United became more comfortable and began to take the game to their opponents. In the 20th minute Paul McMullan wriggled past his marker and had a shot at goal from the right hand side of the penalty area, but Inverness goalkeeper Mark Ridgers was able to make a comfortable low save. The same player had another chance a couple of minutes later after being set up by Fraser Aird, but his effort was blocked by Shaun Rooney and went for a corner kick which came to nothing. Six minutes later, at the other end, Joe Chalmers was allowed to shoot from 30 yards out, although his shot was charged down by Fraser Fyvie for an Inverness corner, which again came to nothing after the United defence had several attempts at clearing the ball before managing to hammer the ball clear. Billy King was the next United player to try his luck after being played in on goal by a Safranko knock down, although as with McMullan earlier on his low shot did not trouble Mark Ridgers.

With nine minutes to go until half time United had their best chance of the game. Pavol Safranko found himself with the ball at his feet six yards from goal after the ball broke to him from a Fraser Fyvie through ball. For a brief moment it looked like Safranko had a tap-in only for Brad McKay to appear out of nowhere to block the Slovakian’s shot. A minute later Fraser Aird was denied by a block from the same player as United upped the tempo. The Canadian had another shot at goal from out wide a couple of minutes later, and although Mark Ridgers looked briefly troubled by the shot the ball went just past the far post. Billy King was in acres of space to Aird’s left but never received the ball even though he was probably the better option.

In the final minute of the half Paul McMullan saw his low cross from the right deflected just wide by Brad McKay, and Rachid Bouhenna had an effort cleared off the line from the subsequent corner kick. There was still time for another United chance before the half time whistle, and this one really should have been taken as Pavol Safranko headed the ball wide from a Stewart Murdoch cross.

There was no let up in the pace of the game at the beginning of the second half, although as with the first half it was the away side who created the first opportunity. Jordan White should maybe have done better after meeting a dangerous cross from the left from Carl Tremarco, but the big striker could only head the ball over the bar. Pavol Safranko missed a similar chance at the other end after eight minutes of the half, and again the striker should maybe have done better as he met a terrific cross from the right from Fraser Aird, but his downward header went just past the post.

However, two minutes after that chance Pavol Safranko was to get the goal his play deserved. Fraser Aird played in an inswinging corner from the left and Safranko met the ball with a lovely glancing header to nod the ball past Mark Ridgers and into the net. It was the very least United deserved.

Although Coll Donaldson was booked a couple of minutes later for a foul on the tireless Safranko, the goal heralded the away side’s best spell of the game. United goalkeeper Ben Siegrist was forced into a last ditch save from Jordan White. A low cross was allowed to get all the way through to almost the goal line before Siegrist was able to intervene. There was a flashpoint a couple of minutes after that when Fraser Fyvie took exception to a late tackle from Brad McKay. Fyvie squared up to the Inverness defender and players from both sides piled into the melee. After the referee separated the players, both Fyvie and McKay were booked. Sean Welsh was booked a minute later for a foul on Fraser Aird on the edge of his own penalty area, but the resultant free kick came to nothing.

As in their previous game, United were evidently tiring and an equaliser looked like it was coming. Sure enough, it arrived in the 72nd minute, and as with United’s goal it came from a set play. After Fraser Fyvie conceded a free kick out wide on the United left, the set piece from Liam Polworth was swung into the box where it was diverted into the net, with the ball looping over Ben Siegrist. Although several players were in attendance and it was initially hard to tell who actually scored, it turned out to be Jordan White who was the man to get the final touch, although former United defender Coll Donaldson did do his best to try and claim the goal.

United were looking wobbly at this point, not helped by Sean Welsh appearing to get away with a second bookable offence after a foul on United substitute Nicky Clark. Robbie Neilson was spoken to at length by referee Euan Anderson for his reaction. Soon afterwards, Jordan Clark should have given the away side the lead after being played through on goal by Liam Polworth, but with only Siegrist to beat he hit a rather weak shot wide of the post. It was a real let off for United.

Coll Donaldson’s day got more eventful with eight minutes to go as he was sent off for a second bookable offence after bringing down Nicky Clark on the edge of the box after the United substitute had played a neat one-two with Pavol Safranko. That heralded a spell on United pressure which would last until the end of the game, although the Inverness defence was able to hold out. With six minutes left Nicky Clark could not get quite enough of a touch onto Sam Stanton’s cross.

In the final minute, Paul McMullan spurned a great chance to win the game. He burst in from the left and a path to goal opened up in front of him. However, he tried to curl the ball into the top corner when he probably would have been better off putting the laces through it, and the ball went high and wide. Shaun Rooney was then booked for fouling McMullan before United substitute Yannick Loemba missed the final chance of the game in similar fashion to McMullan’s chance a couple of minutes earlier. After being set up by Sam Stanton in the afterwards from a long throw from Frederic Frans, Loemba also attempted to curl the ball into the top corner, but his effort was even more wayward than McMullan’s and the game ended soon afterwards.

As disappointing as the result was after the chances United had created, the reaction of the fans at full time acknowledged the vastly improved performance from the players. The crowd of 5628 were left thoroughly entertained by the game as well as the organisation and commitment of the players. 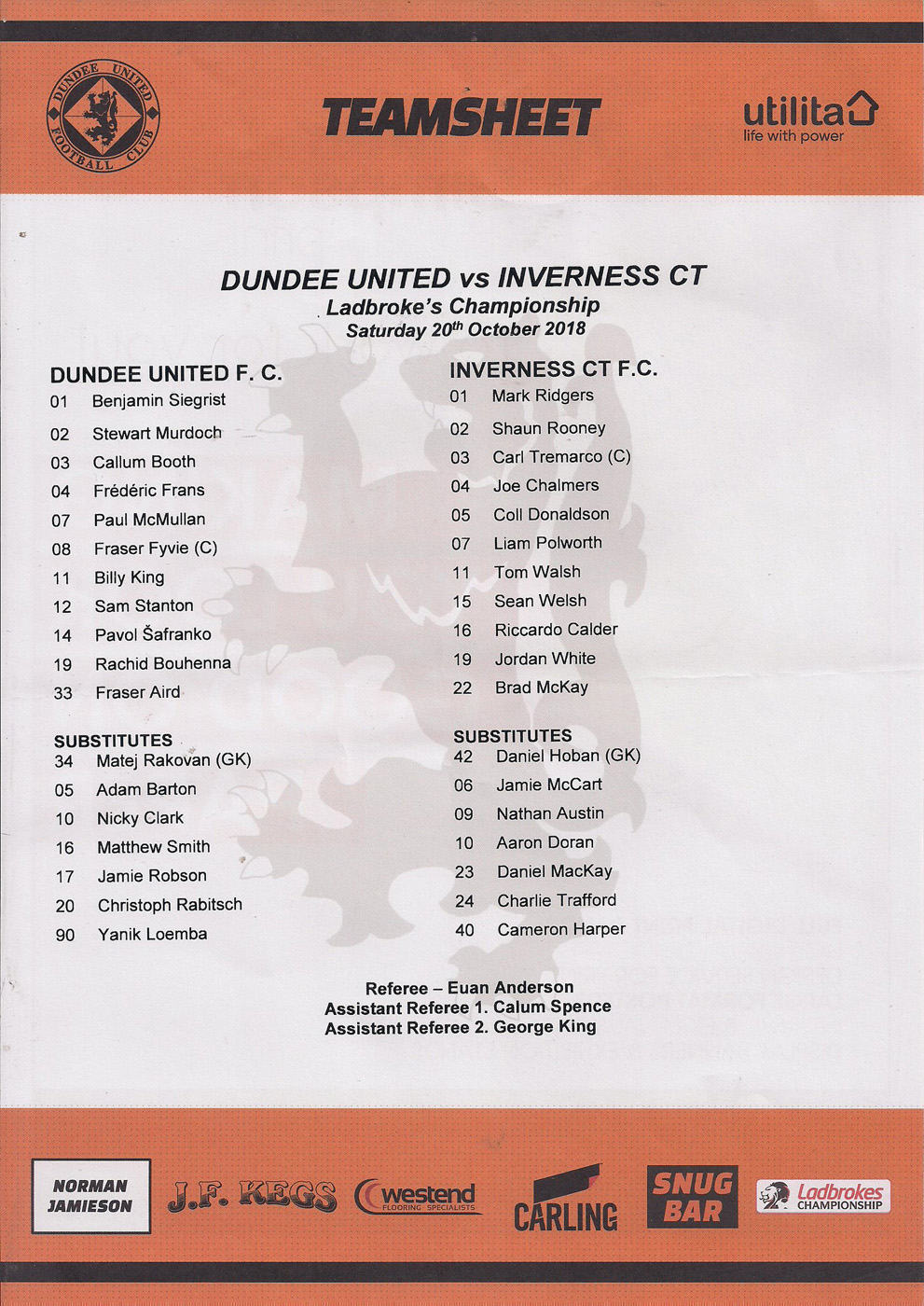