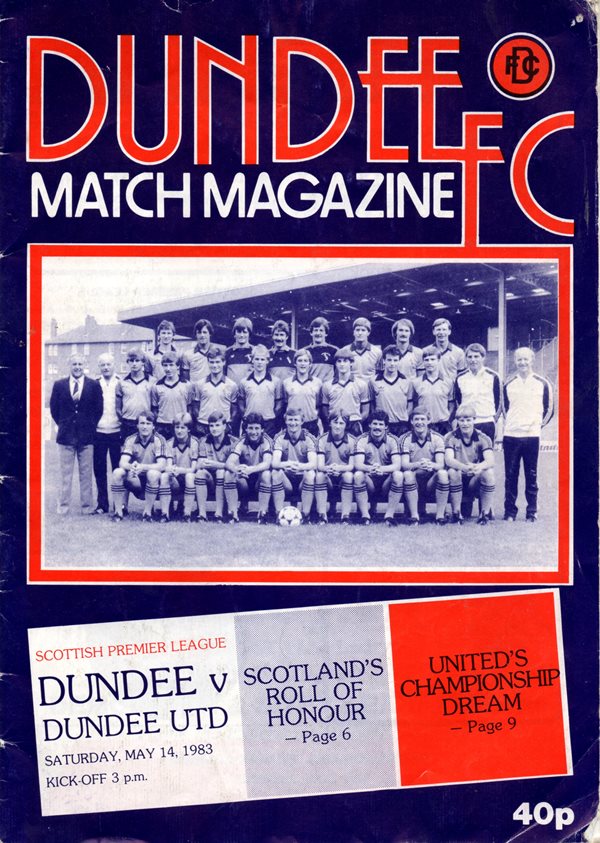 It was all down to this... the last Premier Division match of the season. United were sitting top, just one point above both Celtic and Aberdeen - all they had to do was match the results of the other two and United would be champions of Scotland for the first time in history. Aberdeen, fresh from their European Cup Winners' Cup victory in midweek, were reliant on the other two teams dropping points, not to mention a major swing in goal difference. Just two goals separated United and Celtic. It was in United's own hands though, a victory in the fourth Dundee derby of the season would guarantee the championship, no matter how Celtic got on in the Old Firm match at Ibrox. Richard Gough was the only change from the 4-0 win over Motherwell, with John Holt dropping to the bench.

United stormed towards the championship with two goals inside the first 12 minutes. A glorious goal by Ralph Milne totally worthy of the occasion, sent United fans delirious with joy after just four minutes. After picking up a Paul Sturrock pass just inside the Dundee half, he carried the ball forward, skipped past Dundee's Stewart McKimmie, then delivered the most delightful chip high over the head of Colin Kelly and into the net from 25 yards. It was all United in these early stages, and 8 minutes later Dave Narey was brought down as he drove into the box, and referee George Smith pointed to the spot. Once the Dark Blue protests had been waved away, which saw Bobby Glennie booked for dissent, Eamonn Bannon stepped up to take the penalty kick. Kelly guessed correctly and saved to his left, however as the ball span loose, Bannon reacted the quickest to smash the ball home. Soon after, a Sturrock cross had Kelly panicking as it came off the top of the crossbar, and United fans had cause to celebrate even more when news arrived from Ibrox that Celtic were 2-0 down. Apart from a few dangerous balls into the box, Dundee had yet to show any signs of a threat, and United should have went 3-0 in front in the 27th minute when Davie Dodds flicked the ball off the bar and the ball looked to have bounced over the line, but play was waved on. Straight away Dundee broke right up the other end and Iain Ferguson lashed the ball past Hamish McAlpine from around 10 yards out.

There was little goalmouth action in a tense nervy second half, although both Milne and Sturrock created chances before the latter limped off on the hour mark, replaced by John Holt. The nerves in the second half got worse when word came through that Celtic had fought back from 2 goals down against Ranges to lead 3-2 with 15 minutes to play, and the realisation that a Dundee equaliser would see the Championship head to Glasgow. Albert Kidd nearly did just that, with a chance at the back post which he thankfully headed over the bar. At Ibrox, Celtic scored a fourth near the end, and Aberdeen had easily defeated Hibs at Pittodrie,but in the end neither of those results counted. The final whistle eventually blew at Dens Park and United achieve the impossible dream — the League title. The match was perhaps not the greatest but that final whistle will be recalled by Tangerine followers for the rest of their lives.