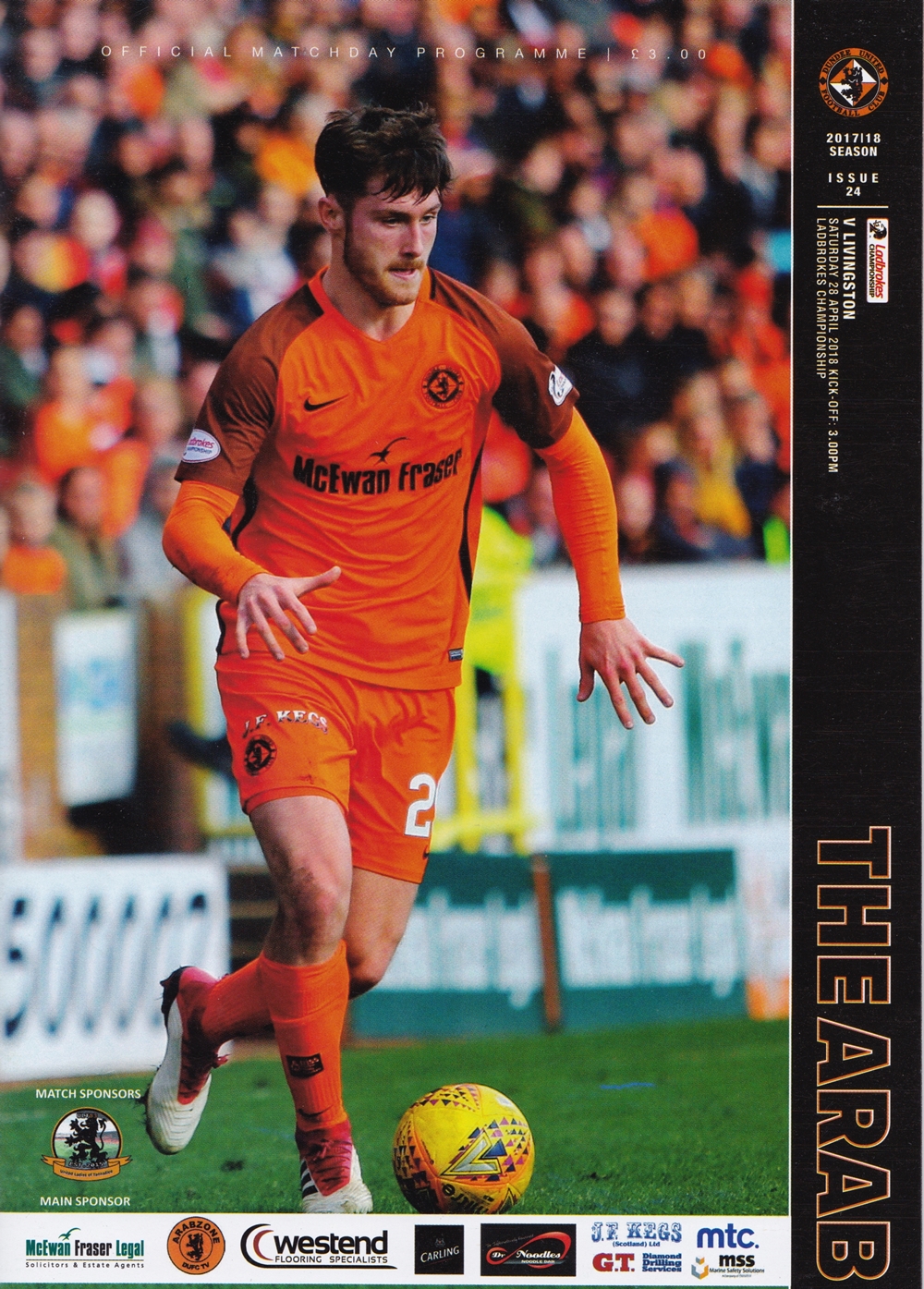 United secured third place in the final standings of the Championship with a 2-0 win over Livingston at a sunny Tannadice.

Results the previous week meant that second place in the league was no longer a possibility for United with Livingston being four points ahead of them, and with Livingston knowing they had over a week before their first playoff fixture they fielded a strong line up despite the game being, for them, meaningless.

With the excellent season United’s opponents had been having, it was easy to forget they were a newly promoted team, and to finish second was a huge achievement. The rather leisurely pace of the game did reflect how little was truly at stake for both teams, although in a fairly drab first half it was the away side who had the better of things. Their first chance came within two minutes and should have seen them take the lead. After United had failed to deal with a Livingston cross, Craig Halkett headed the ball off the United crossbar with Deniz Mehmet well beaten. The ball eventually came back to the Livingston defender, but this time his header was well over the bar. After ten minutes the away side threatened again with a Nicky Cadden free kick from out wide that Deniz did well to pluck out of the air.

There was a scare for United after fifteen minutes as, from a long throw from Alan Lithgow, Declan Gallagher attempted an ambitious overhead kick. However, as ambitious at it was, it nearly paid off as the ball went just past the post to the relief of the United support behind the goal. The home side had their first chance a couple of minutes later after a Craig Slater corner, although Bilel Mohsni’s header was well off target. Within in a minute, they almost went ahead through a Scott Fraser shot which Livingston goalkeeper Neil Alexander did well to charge down before Craig Halkett headed the ball clear from almost on the goal line. The rebound was hit towards goal by Craig Slater on the edge of the box but the ball went well wide. Some good play between Fraser and Scott McDonald on the half hour mark saw the latter through on goal, but he just failed to make contact with the ball when any touch would probably have given United a lead.

With seven minutes to go until the break, the best chance of the match so far came for the away team when former United player Lee Miller unleashed a shot from the edge of the area that Deniz Mehmet di well to block. The United keeper looked to have been caught by Jordan Thompson after he had made the save, but the referee saw nothing amiss and half time came without the deadlock being broken.

As the second half began, United knew that with Dunfermline beating Dumbarton by three goals to nil, that if they could not win the game they would drop to fourth place in the league. Despite that incentive, Livingston picked up where they left off by continuing to be the better team. Ryan Hardie saw a fierce goalbound shot after two minutes of the half blocked by Stewart Murdoch, and eight minutes into the half another dangerous cross from Nicky Cadden was deflected over his own bar by Bilel Mohsni. A minute later, United took the lead, and it actually came from the resultant Livingston corner. The corner kick was only half cleared, and when the ball was crossed for a second time the ball flew through the United penalty area and Tony Ralston was able to clear. Scott Fraser picked the ball up in midfield and drove towards goal, and as the away defence retreated he played the ball to Billy King wide on the left. King’s cross went across goal and found Craig Slater six yards out at the back post, and the Colchester loanee knocked the ball into an empty net.

Slater nearly doubled his tally a couple of minutes later as he cut in from the right-hand side. However, on this occasion his curled shot was straight at Neil Alexander and the veteran goalkeeper saved comfortably.

Livingston were still a threat at the other end, and the long throws of Alan Lithgow were continuing to cause United problems. On the 64th minute, one such long throw saw Nicky Cadden shoot just wide from six yards out. Ten minutes later Livingston should have been level but again the chance was wasted as Lee Miller saw his header go wide from a couple of yards out despite having an open goal in front of him.

At the other end, substitute Thomas Mikkelsen nearly doubled United’s lead with his first touch of the ball after being played in by Slater, but his volley from the corner of the penalty box hit the side netting. Livingston substitute Jackson Longridge nearly grabbed an equaliser from another Lithgow long throw seconds later, but again could not get his header on target. With ten minutes to go, Ryan Hardie hit a shot just wide from the edge of the box as Livingston continued to pile the pressure on.

United sealed the win and third place in the league with a second goal with five minutes to go. It began with a Billy King corner, which Tony Ralston met with a fine header which rebounded off the post. The ball was half cleared to King on the right hand side, and he floated in a fine cross which Scott McDonald met with a glancing header which floated past Alexander and into the net.

With third place secure, that was the end of the chances, although Bilel Mohsni, who had already been booked, sailed rather close to the wind with a foul on Scott Pittman which on another day could have seen him gain a second yellow card. In the end, no harm was done and United settled for the 2-0 win as both teams took their foot off the gas in preparation for future challenges. The result meant that the first leg of their promotion playoff would be against Dunfermline Athletic, with the first leg on Tuesday night being away from home. If United are to gain promotion this season, they will have to do so the hard way. 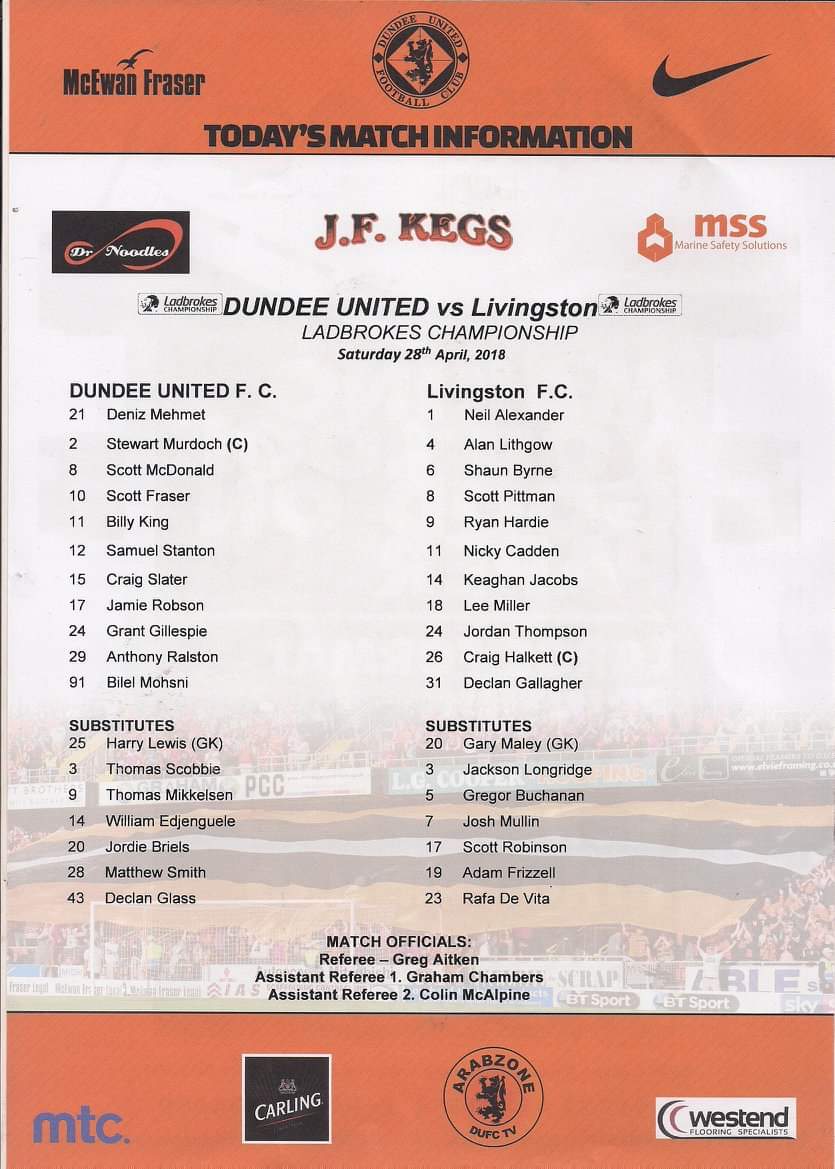