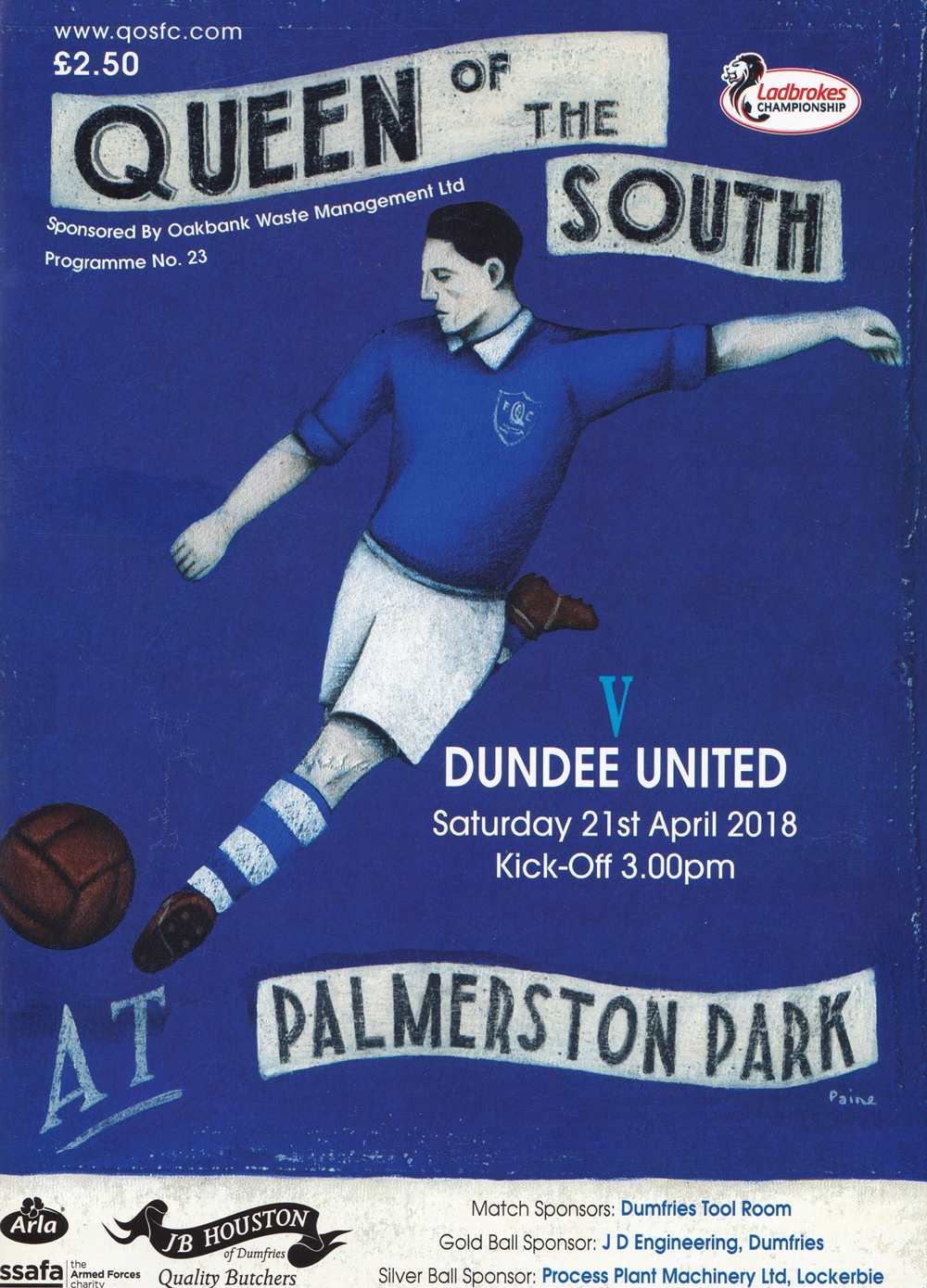 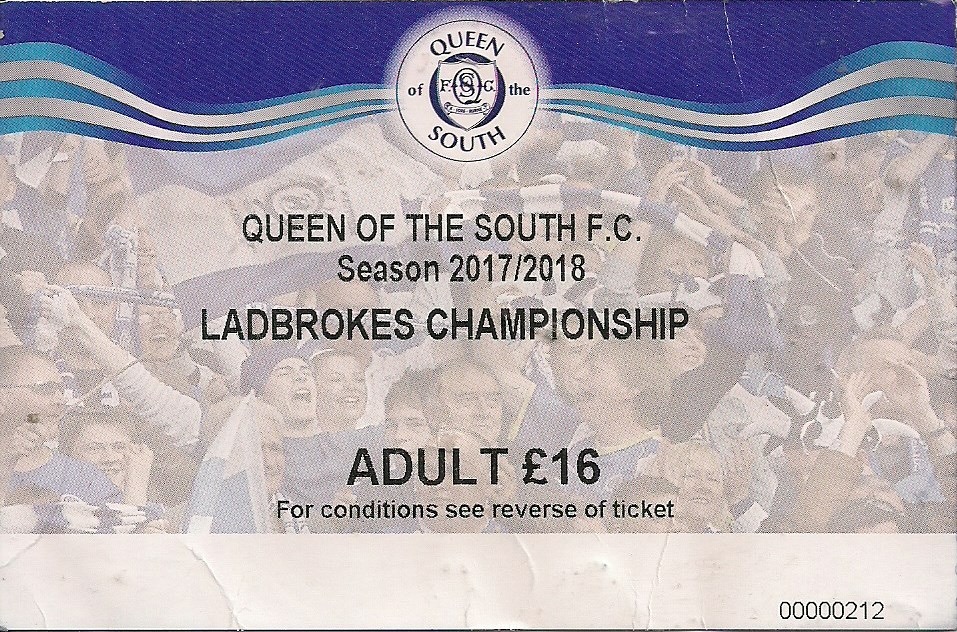 United’s recent good form came to an abrupt end with a desperate performance and a 3-0 defeat against Queen of the South at Palmerston. As bad as the scoreline was, it could have been even worse for a team which had actually looked a lot more solid at the back in previous weeks.

There were two changes to the starting line up from the 5-0 victory against Brechin City and given his performance as a substitute in the second half in midweek it was no surprise to see Scott McDonald return to the team. Tam Scobbie also came into the team and they replaced Grant Gillespie and Jamie Robson, who both dropped to the bench. Emil Lyng was fit enough to also take his place among the substitutes.

It was rather an inauspicious start by the away side, and they were somewhat lucky not to concede a goal in the first 30 seconds of the game. Some good work from Lyndon Dykes saw him bulldoze his way past Bilel Mohsni, and he fed the ball to Stephen Dobbie, but the striker’s shot lacked any real power and the ball ran through to Deniz Mehmet in the United goal. Dom Thomas then hit a shot just wide as the home side kept up the early pressure, and after five minutes United had another lucky escape when a great cross from Thomas found Darren Brownlie unmarked at the back post. However, the Queens player, perhaps surprised by the time and space he had been afforded, could only head the ball straight at Deniz.

Given their rapid start, it was no surprise when the home side took the lead in the ninth minute. Queen of the South broke down the right-hand side yet again and when the ball was crossed along the six-yard line by Dom Thomas, Lyndon Dykes steamed in unopposed at the back post to tap the ball into the net, despite a valiant effort from Deniz to keep the ball out.

After that goal, United started having a lot more possession, but most of the time they were playing the ball around in their own half of the pitch and were providing no threat whatsoever to the Queens players. The home side had very little possession but were continuing to prove a threat when they did have the ball, shown most obviously when a great Dobbie pass put Lyndon Dykes through on goal, but Deniz was able to race off his line to clear the danger. United did force a couple of corner kicks at this stage of the game, but the home side were able to deal with them easily. Dobbie almost added a second goal after 20 minutes after Flood was dispossessed by Josh Todd, and then Kyle Jacobs hit a shot well off target after picking up a loose ball on the edge of the United penalty area.

At this stage in proceedings, Queen of the South did look like the more likely team to get the next goal, and so it proved as they doubled their lead on the half hour mark. Dom Thomas again gained possession on the right-hand side and fed Dobbie. The veteran striker ran down the right and hit a low cross which was only partially cleared by the United defence, not helped by a slip from Willo Flood as he attempted to intercept the ball. It fell to Joe Thomson on the edge of the box, and he hit a low shot which deflected off the prone Flood and trundled into the net.

That goal finally seemed to rouse the United players, and soon after the second goal Scott McDonald did well to set up Billy King, but after fashioning himself some space he pulled the shot well wide of the target. King did force Queens goalkeeper into a good save soon afterwards with a stinging drive, and then Tony Ralston decided to take matters into his own hands by breaking forward and working himself into a good shooting position. However, once he had found himself some space he failed to keep his shot down and United went in at half time two goals down, and deservedly so.

Emil Lyng came on for Paul McMullan at half time, and the away side made a much improved start to the second half. An early Billy King corner saw a good chance for Thomas Mikkelsen, but the Dane could not control his header and the ball went wide. At the other end a break down the left set up another chance for Joe Thomson, but he hit the ball well wide. Although the away side did have the bulk of possession, Queen of the South were continuing to cause most of the problems. On the hour mark should have scored a third goal when Lyndon Dykes was put through on goal by a lovely lofted pass from Stephen Dobbie, but again Deniz Mehmet raced off his line to block the shot. United were almost caught out by a quickly taken throw in a couple of minutes later, and as the away side were left daydreaming Dobbie hit a curled effort at goal which went just wide of the far post.

Midway through the second half, United looked to have a strong penalty claim when Scott McDonald was manhandled by Darren Brownlie, but the referee was uninterested. Five minutes later, the referee did give United a free kick 25 yards from goal after Kyle Jacobs fouled Sam Stanton. Sadly, United substitute Scott Fraser could not replicate his free kick goal from the previous week’s Brechin game, as he sent his effort well over the bar to his obvious annoyance.

In a final throw of the dice with fifteen minutes to go, William Edjenguele was brought on for Thomas Mikkelsen and Csaba Laszlo sent Bilel Mohnsi up front. However, it was the substitution made by the home side at the same time which was to have the bigger bearing on the match result. The ball found its way to Connor Murray, who had just come on for the home side, 20 yards from goal and wide on the right-hand side. The ball sat up nicely and he smashed an incredible shot past Mehmet to give Queen of the South a three-goal lead and extinguish any vague hopes United may have had of getting anything out of the game.

Although the game was gone, with Mohnsi remaining up front United were able to create some half chances as the game drew towards its end. The most notable opportunity came with nine minutes to go through Scott McDonald hit the bar with a curling shot from the corner of the penalty area. With five minutes left on the clock, Emil Lyng was sent through on goal, but he was forced wide and Queens goalkeeper Jack Leighfield was able to block his shot on goal. United should have got a consolation goal in stoppage time, but when a great cross from Willo Flood was met by the unmarked Bilel Mohsni the defender could only head the ball over the bar.

There was a peculiar postscript to the game when, as the United fans streamed out of the ground, news came through that Dunfermline had scored a late equaliser against Inverness, meaning that Dundee United’s participation in the Championship promotion playoffs had been secured. After such a poor performance, there was very little consolation to be had. If United had any ambitions regarding promotion, performance levels would need to be significantly higher than the ones which were witnessed in this match. 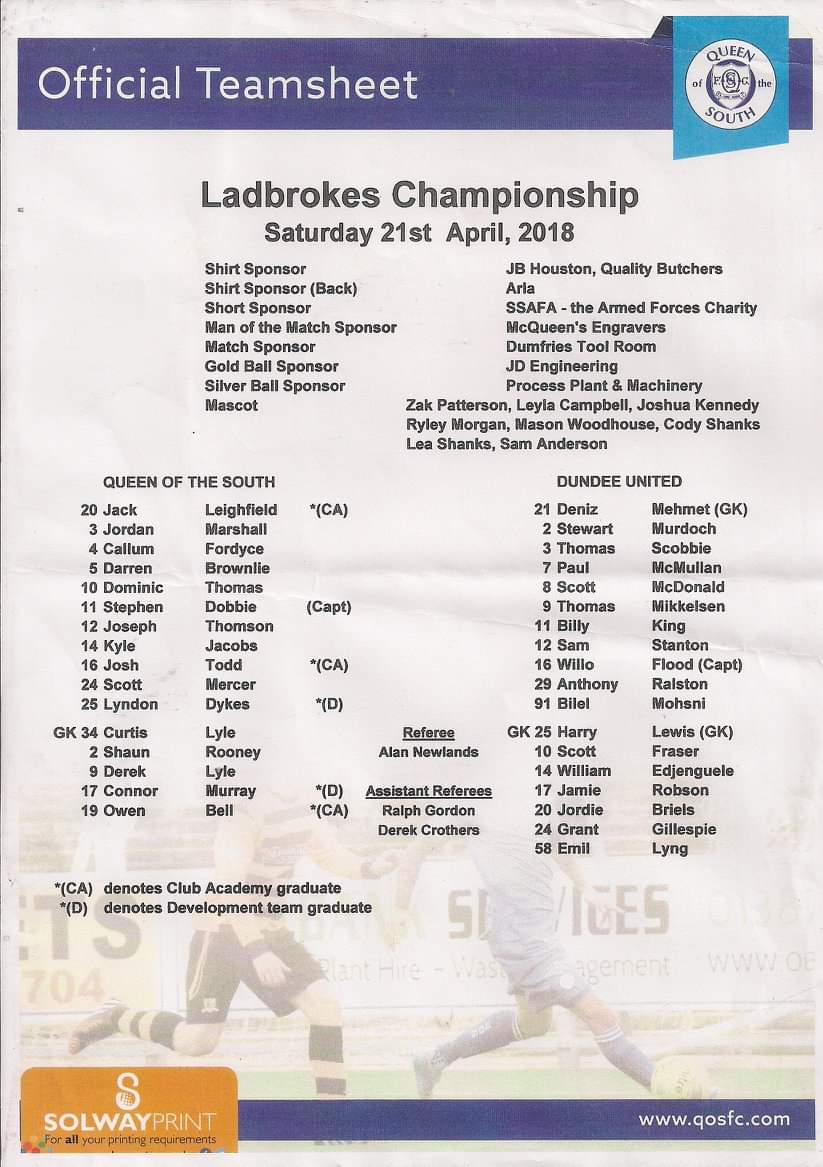