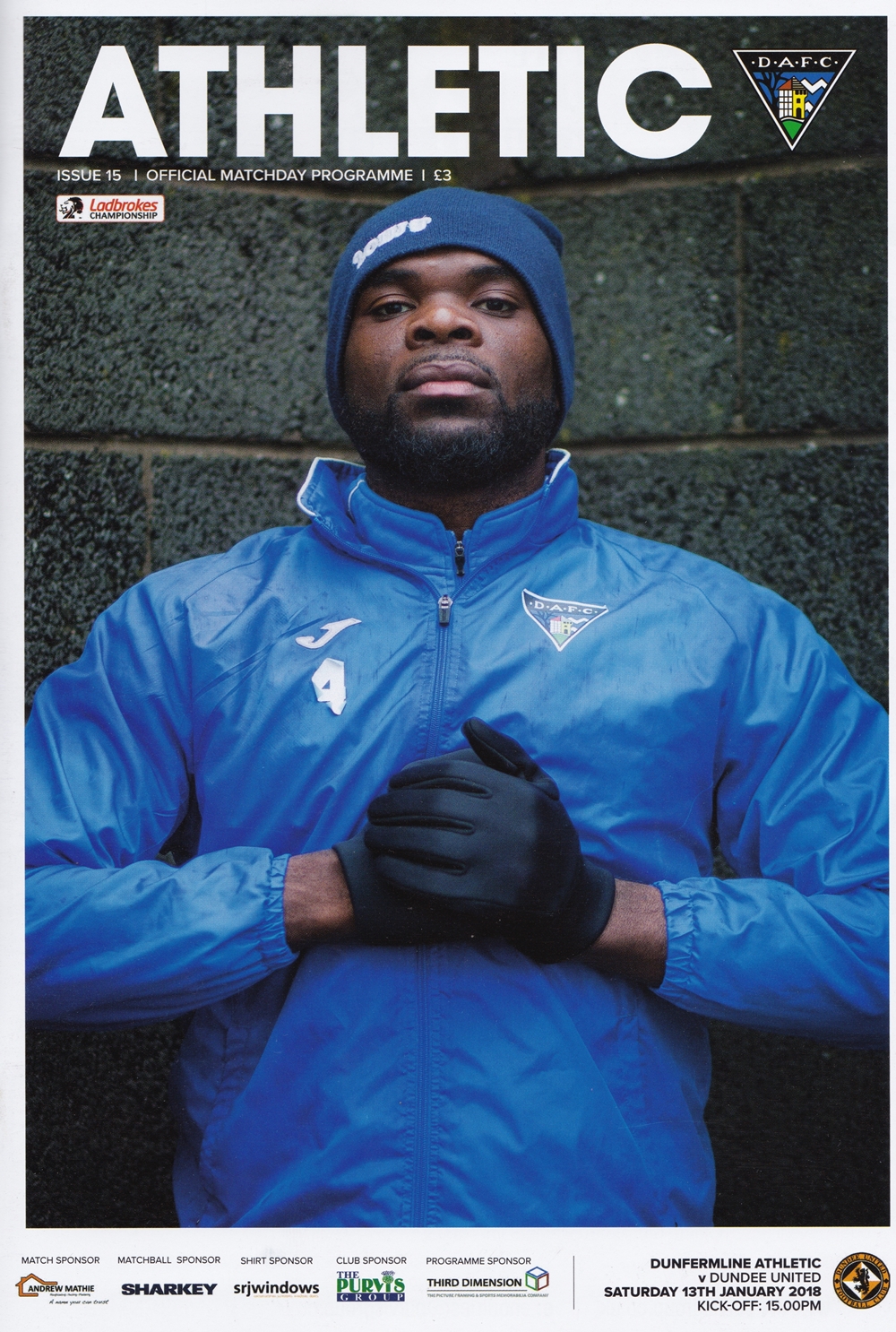 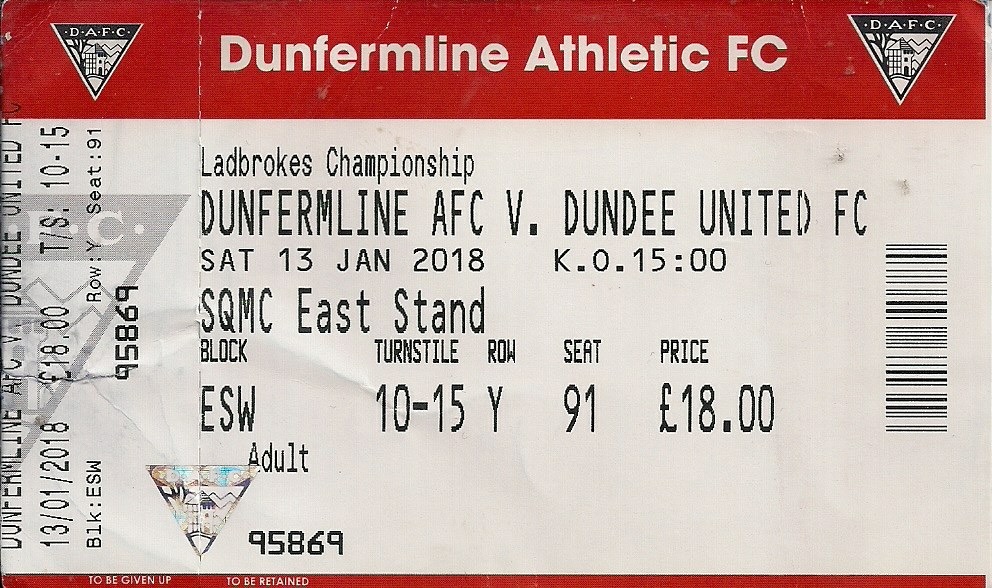 United recovered to some extent from the 6-1 drubbing by Falkirk by holding third place Dunfermline Athletic to a 0-0 draw in a largely uneventful game at East End Park, although the draw did see United fall eight points behind St Mirren in the Championship table. It was a game which was high in endeavour but low in quality.

United made three changes from the team who performed so abysmally at the Falkirk Stadium. Mark Durnan returned from injury and Paul McMullan from suspension, and new signing Emil Lyng also made his first start for the club. They replaced Paul Quinn who was dropped to the bench, and Brandon Mason and James Keatings who were both injured.

It did not take the home side long to create an opportunity, as Declan McManus broke forward from midfield in the first minute and fired a 20-yard left foot shot narrowly over the bar. It was to be the first of several missed chances for the former Raith Rovers striker. United then had a couple of half chances of their own, with a threatening Billy King cross cleared by the home defence before some good play from Lyng set up a chance for Scott McDonald, but the Australian striker missed the ball completely at the edge of the box when attempting a shot. Both Declan McManus and Nicky Clark had further efforts on goal for the Pars in the first ten minutes of the game, although neither were able to get their efforts on target. Paul McMullan saw an angled shot saved well by home goalkeeper Lee Robinson after 13 minutes, but from then on the first half rather degenerated, with neither side able to string more than a couple of passes together and further chances were to come at a premium. Jason Talbot was forced into a hurried clearance from a McMullan cross midway through the first half and Jean-Yves M’voto was forced to block an Emil Lyng shot on the half hour mark, but aside from that the scrappy nature of the play meant that very little was being created by either team.

As half time drew nearer, Dunfermline began to take control of the game. Ten minutes from half time, Willo Flood had to look lively to deal with a Michael Paton cross, before Mark Durnan then had to deal with another cross from the same player. The home side forced a series of corners, but unlike in their previous game the United defence we able to deal with whatever was thrown at them. Two minuets before half time, a shot by Joe Cardle from just outside the area was charged down and then hurriedly scrambled away, the scrappy nature of the play rather summing up the first half.

United started the second half reasonably well. Sam Stanton worked himself into a good shooting position three minutes into the half, but his attempt on goal was high and wide. Three minutes after that, Willo Flood shot wide after some good work from Paul McMullan. From then on, however, the home side by and large dominated proceedings. Just before the hour mark, Harry Lewis failed to deal with another Paton cross, and he was fortunate that the subsequent shot from Joe Cardle was blocked by the away defence. Soon after, Lewis was again fortunate not to be punished for an error, this time with a poor clearance which landed ta the feet of Michael Paton. However, the Dunfermline player could not take advantage of the situation and curled his effort just wide. Lewis was again forced into action a minute later, but he redeemed himself somewhat for his earlier mistakes with a good save from Declan McManus who was clean through on goal. Nat Wedderburn then hit a shot from around 20 yards out but again he could not hit the target.

Although they were being outplayed at this point, United were still able to crate the odd chance. After 72 minutes, Paul McMullan again got himself into a good shooting position, but his low angled shot was well saved by Lee Robinson. From the resultant corner, Craig Slater then had a shot deflected wide by the home defence, although bizarrely a goal kick was given by the referee. The away side had their best chance of the game with thirteen minutes to go when a cross from Willo Flood was headed just over the bar by Emil Lyng from just a few yards out. In the last ten minutes, it was beginning to look like both teams were running out of ideas, but suddenly the home side developed a second wind. With eight minutes to go, Michael Paton hit a great cross which was met by an equally good header from McManus. His header looked for all the world that it would hit the back of the net, but Harry Lewis made an excellent save with his feet to keep the scoresheet blank. United then created a chance of their own when Jean-Yves M’voto sliced an attempted clearance from a Jamie Robson cross over his own bar. Dunfermline then nearly won the game with virtually the last kick of the ball when Declan McManus cracked the outside of the post with a fierce shot which had Lewis beaten.

The draw did extend United’s unbeaten run against the Pars to eleven games, as well as being a welcome clean sheet after the heavy defeat to Falkirk the week before. However, the draw did not do either side a lot of good in their pursuit of league leaders St Mirren, but on reflection United should be grateful to get the point, as this was a game they probably should have lost on the balance of play. 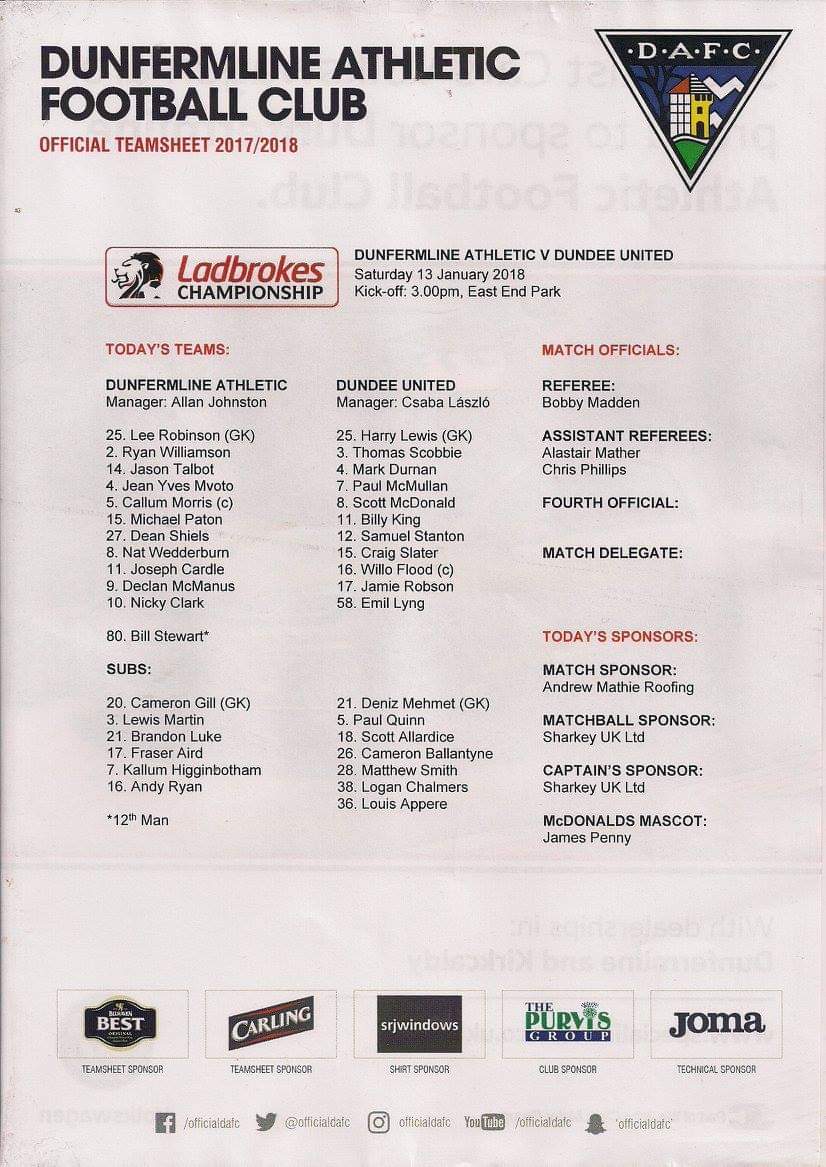