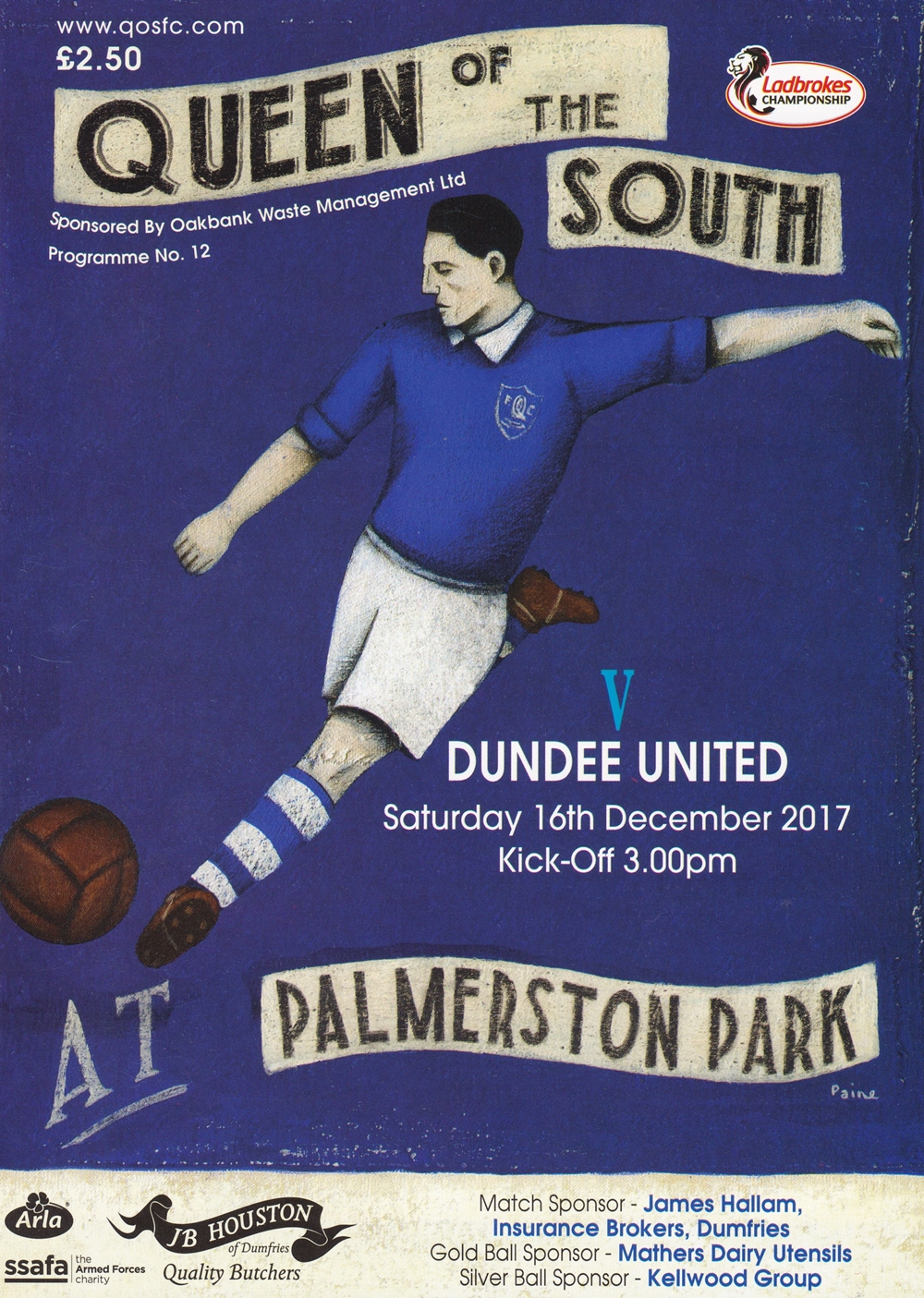 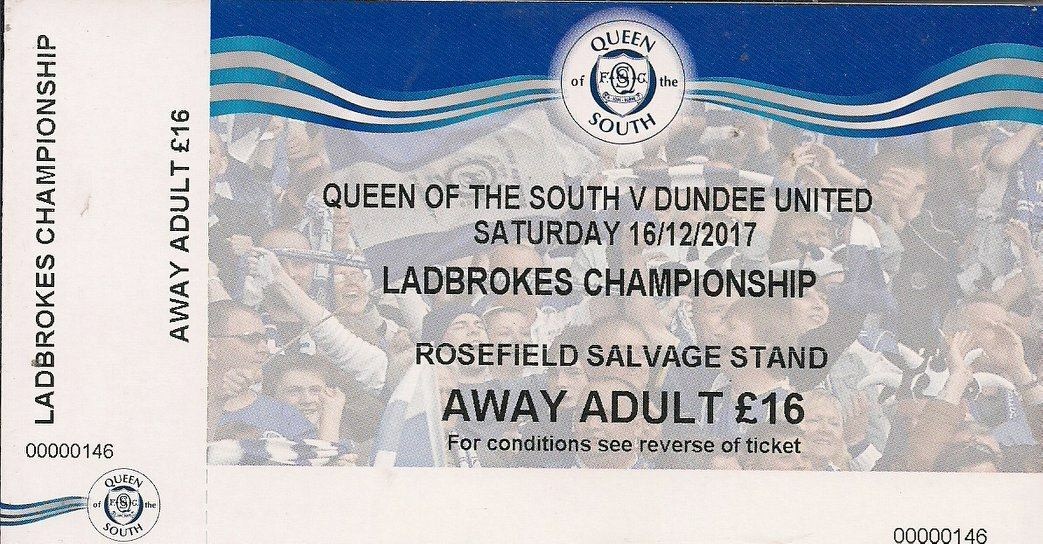 United’s recent momentum was stalled somewhat by their away game against Queen of the South being abandoned at half time by referee Craig Thomson. Despite the artificial surface at Palmerston Park, the referee deemed the surface to be slippery and potentially dangerous to the players.

Right back Stewart Murdoch was injured in training during the week, leading to the only change in the starting line-up from the previous week’s victory over Morton. Paul Quinn came into the side and played centre half with Tam Scobbie moving over to an unfamiliar right back role to cover the absence of Murdoch.

United started the game on the front foot, although it was to be the home side who would have the first chance of the match when a Chris Kane shot was blocked by Harry Lewis. Confusingly, the assistant referee had their flag up for offside although it appeared to be that a United defender has been the last to touch the ball before it went through to Kane. Two minutes later, Paul McMullan hit a low shot not far wide from around 18 yards out. The same player had another chance soon afterwards after being played in by Scott Fraser, although the home defence was able to block his effort. After 17 minutes, some good play from Billy King led to a United corner. Fraser took the kick and the ball dropped to Mark Durnan at the back post. The defender had two efforts on goal, both of which were blocked, and Queen of the South were able to clear the ball from danger.

Soon afterwards, United spurned a great opportunity to take the lead. Fraser played in another great through ball, this time to Billy King. The winger managed to get a shot on goal from 15 yards out with home keeper Alan Martin floundering, however he could only drag his shot past the post. Five minutes later, United had two other decent chances, when a drive from King was blocked by the feet of Alan Martin, before Jamie Robson could only side foot the ball over the bar when in a good position. The home side had a rare effort on goal after 24 minutes when Jason Kerr hit a speculative 35 yard shot, but Lewis was able to save the ball comfortably. Scott McDonald became the next United player to spurn a great chance on 27 minutes, when he could only hit the side netting after some good play between King, Robson and the Australian striker down the left hand side. Three minutes after that, United were thwarted again, this time by another excellent save from Martin from a Billy King header, and the keeper was then able to smother the ball before McDonald could poke home the rebound.

On the 38th minute, there was a controversial incident when Queen centre back Darren Brownlie was perhaps fortunate to only be booked for a horrible looking foul on Jamie Robson. Happily, the United left back was able to continue after a lengthy spell of treatment, and the away side could not capitalise on the subsequent free kick. Fraser Fyvie then smothered a promising break from the home side, knocking the ball out for a corner when Stephen Dobbie looked to be through on goal. Two minutes before half time United created yet another chance when Mark Durnan met a free kick from Fyvie. However, the defender could only head the ball well wide.

United went in at half time rather disappointed to still be level due to their own profligacy, but it was to be all for nothing. Prompted by a couple of senior players on each team, the refereeing team inspected the pitch at half time accompanied by both chairmen and to the evident surprise and disappointment of the majority of both sets of players and supporters, decided that the game could not go on. The large United travelling support had therefore endured a long and ultimately fruitless journey to Dumfries at an expensive time of year. 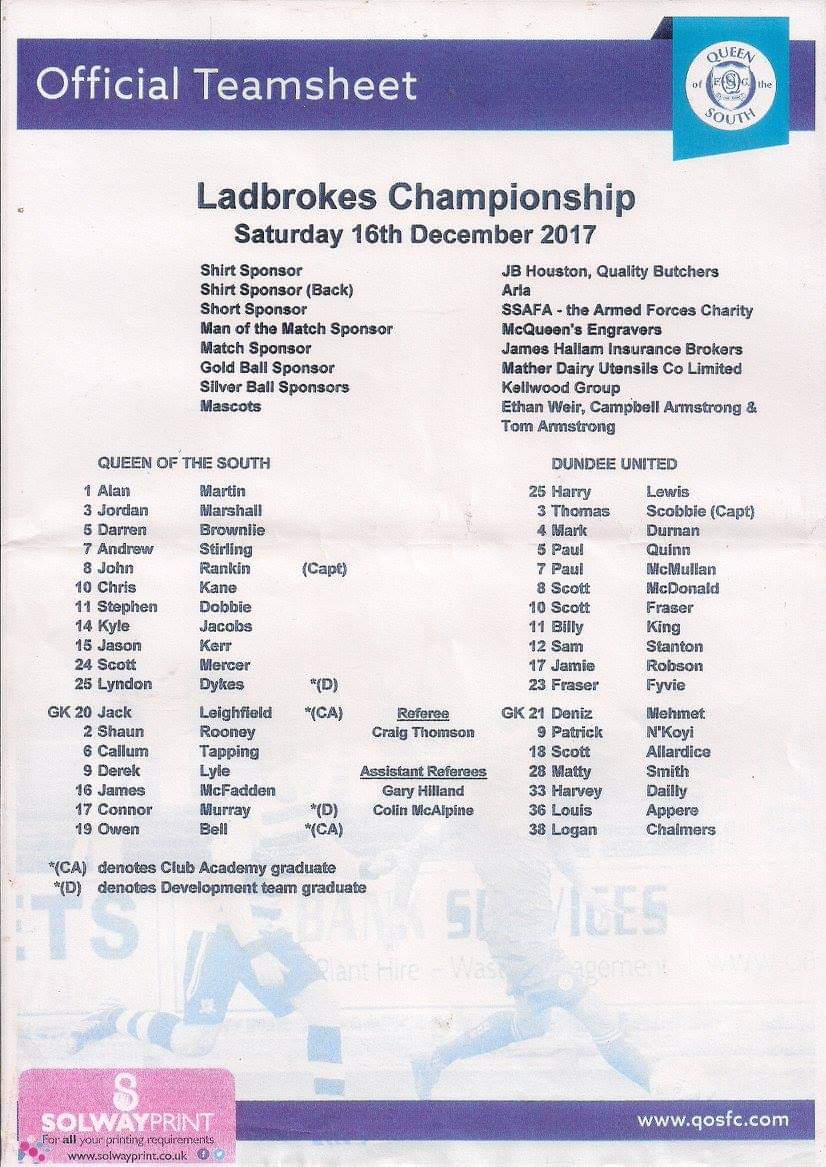