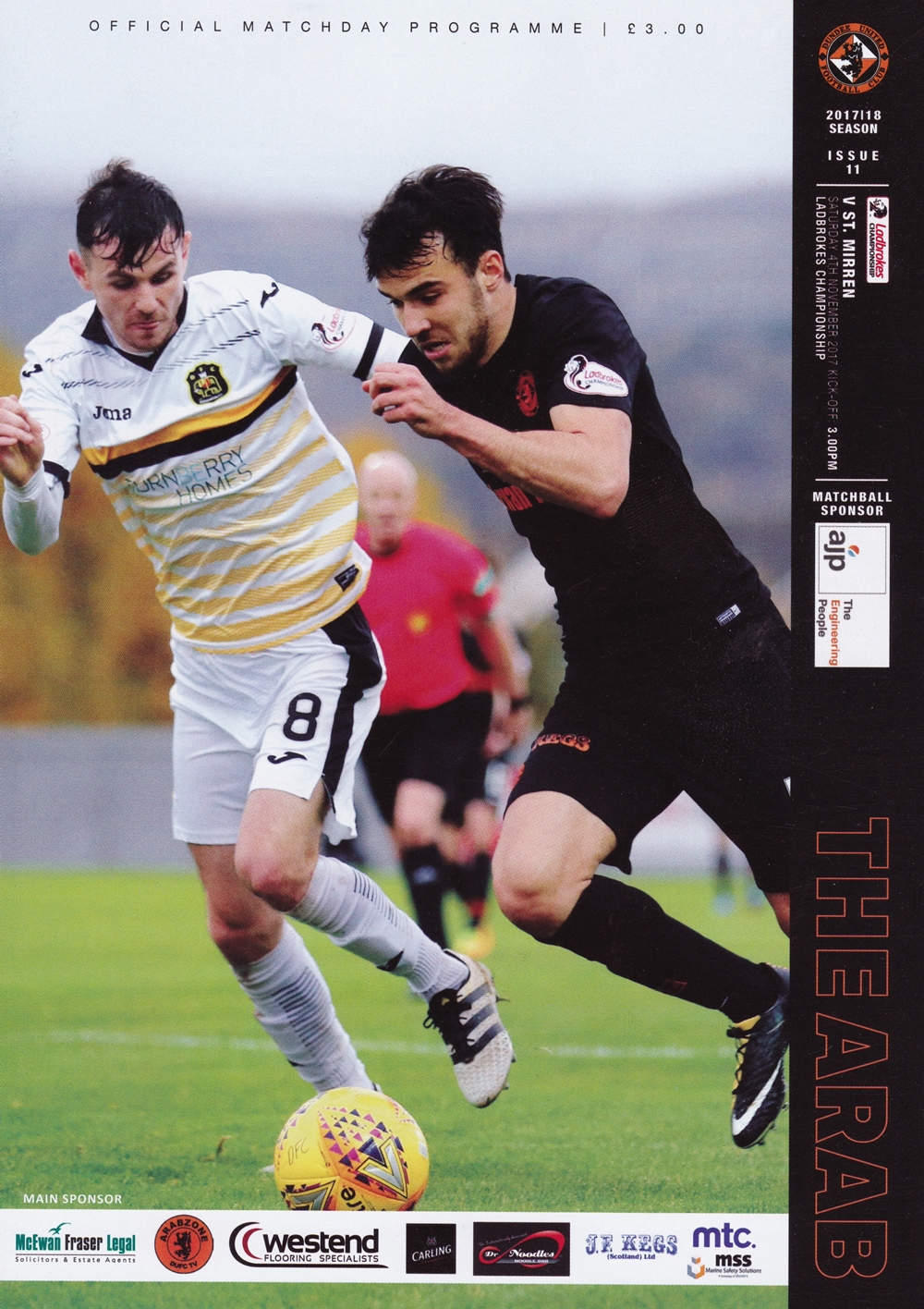 United had not yet appointed a permanent manager by the time of their home clash against leagues leaders St Mirren, meaning that erstwhile assistant manager Laurie Ellis took charge of the team for a second successive game.

Perhaps unsurprisingly, Ellis named an unchanged side from the previous week’s convincing 2-0 win over Dumbarton. St Mirren had beaten United convincingly in the previous meeting between the sides back in August, but never showed any signs of doing the same again as United took a grip of the game in the early stages. It only took five minutes for United to create the first chance of the game, as Scott McDonald had a low shot saved by St Mirren goalkeeper Craig Samson from a Scott Fraser corner. A mere two minutes later, Matty Smith broke towards goal but instead of shooting squared the ball to Fraser when he might have been in a better position to go for goal himself. The ball got caught between Fraser’s feet and the chance was gone.

However, it only took a further four minutes for United to take the lead. A rather crude foul on McDonald by Stephen McGinn led to a free kick for United around 40 yards out. Fraser floated the ball into the penalty area where it was met by a looping header by Mark Durnan from around 12 yards out, and the ball drifted into the net off the far post with the hapless Samson left standing. The St Mirren keeper seemed very slow to react to Durnan’s header, perhaps thinking the ball was drifting wide.

It took twenty minutes for the visitors to create their first chance, although in truth United never looked in any real danger from the effort from Kyle Magennis, and Harry Lewis was able to save the ball easily. After 27 minutes, Tam Scobbie found Billy King with a header, but the former Inverness player’s effort was well wide of the goal.

St Mirren did finally begin to create chances as half time drew closer. They did have a fairly weak penalty appeal on 38 minutes when Durnan clashed with Cammy Smith, but in reality there was nothing to their claims. With five minutes to go until the break, former United loanee Smith got into a great position, but he pulled his shot well wide of goal. Seconds later, Smith spurned a further opportunity, sending his effort into the side netting. However, the last chance of the half fell to United when Willo Flood squared the ball to the impressive Fraser, and his shot was only just over the bar.

The visitors continued their good play after the interval, and put all sorts of pressure on the United defence with good wing play and a series of threatening crosses. United were able to deal effectively with any threat, however, with Mark Durnan being particularly impressive at the back. St Mirren did have a lot of the ball, but despite that were unable to create many clear-cut opportunities and it always felt like United rather had them at arm’s length, despite their narrow lead. Harry Lewis in the United goal really had very little to do despite the pressure coming from the away side. Indeed, for all St Mirren’s possession it was United who had the first shot in the second half, with a Billy King effort from the right-hand side being well saved by Samson on 56 minutes.

On the hour mark, Fraser picked up a loose ball from Lewis Morgan and drove towards goal. He sent a fierce shot from the edge of the area but again Samson did well to prevent the second goal. Six minutes later, King had another effort on goal, this time cutting in from the left-hand side. The shot was blocked, and as the ball rebounded in the St Mirren penalty area Scott McDonald had a low strike blocked by the away defence. With 15 minutes to go, United spurned a great chance to double their lead when Sam Stanton broke forward and played the ball to Scott Fraser. He cut inside onto his left foot but Jack Baird was able to block his shot. United thought they had got the second goal soon after when Tam Scobbie knocked a Fraser free kick into the net at the back post, however the former St Johnstone player was adjudged to have been offside.

Stanton saw another effort saved by Samson before United finally sealed the points with eleven minutes to go. Substitute Fraser Fyvie picked out Scott Fraser at the far post. Fraser controlled the ball before squaring it to Sam Stanton who smashed a low shot past Samson for his third goal in two games.

In the final minute, substitute James Keatings had a shot from just outside the box deflected just past the post. Almost out of nothing, St Mirren did grab a consolation goal in stoppage time when Adam Eckersley chested down a clearance and hit a dipping half volley over Harry Lewis’s head, off the underside of the bar and into the net from over 25 yards. It was a fantastic goal, although ultimately it counted for very little. Eckersley’s stunning goal was the last kick of the game, and it could not prevent United gaining the three points and moving level on points with their league leading opponents at full time. It also meant that Laurie Ellis, after what was likely to be his last game in charge, had the enviable record as caretaker manager of two wins in two games. 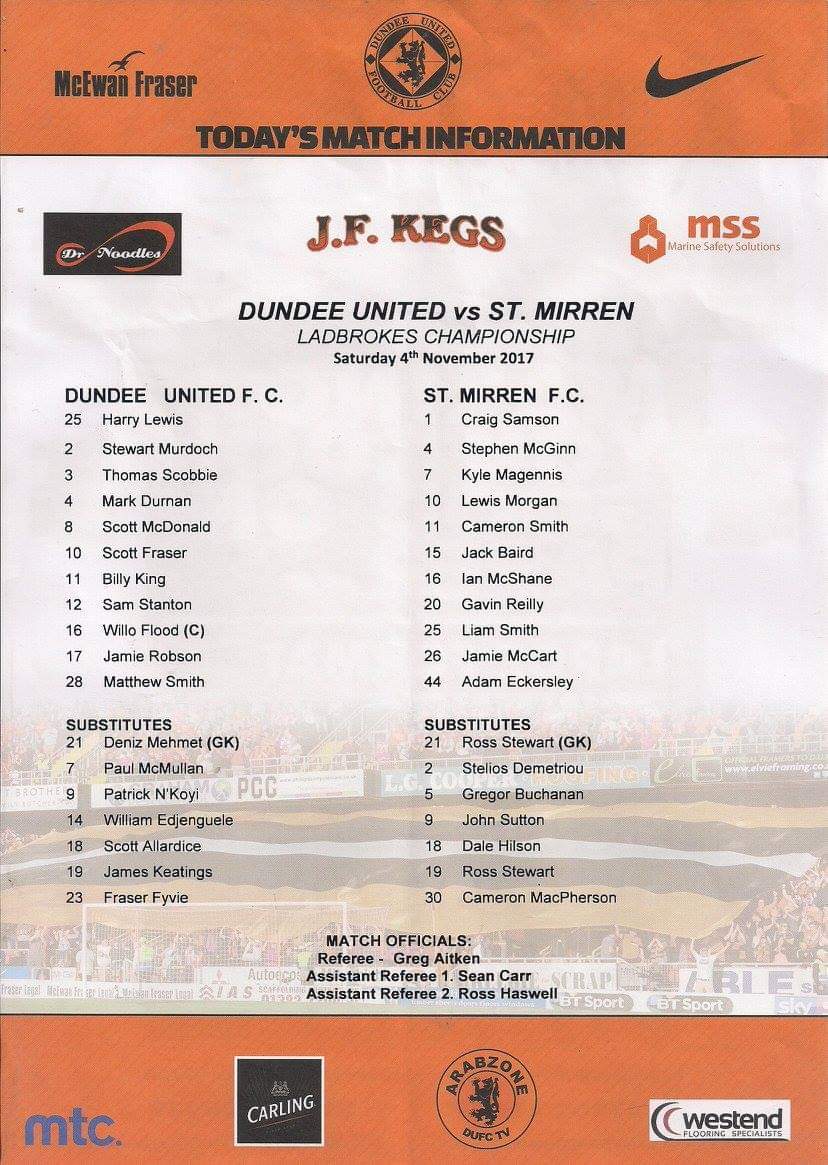