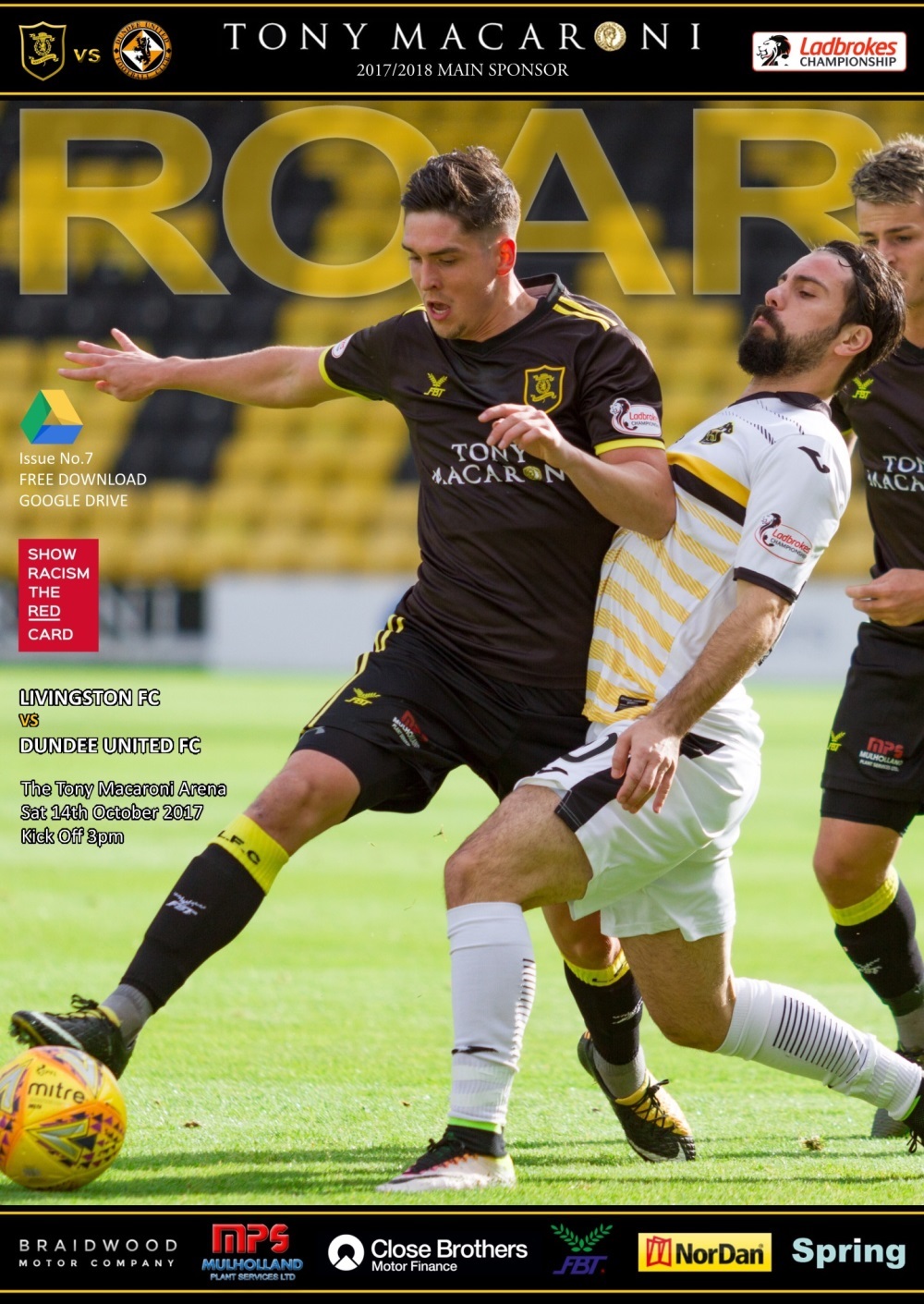 United’s recent good run came to an abrupt end with a desperately disappointing defeat at the Tony Macaroni Arena against Livingston. The defeat saw United slip to fourth place in the league, being overtaken by their newly promoted opponents.

United were unchanged from their last league game, the 3-1 victory over Dunfermline, and around 1300 Arabs travelled to West Lothian in the hope of a similar performance. They were to be disappointed.

Any optimism from the United fans was punctured in the seventh minute when Livingston took the lead. After a foul by Jordie Briels in the centre of the Livingston half, Alan Lithgow launched the free kick forwards. The United defence were slow in reacting, and with Harry Lewis rooted to his line Danny Mullen ran onto the pass and hit the ball into the net from a narrow angle.

It was a poor goal to lose and it rather unsettled United, with the players being unable to create anything against a committed, organised and hardworking Livingston team. The home players constantly pressed the United team, giving them little time on the ball.

After 20 minutes, Livingston spurned a great chance to make it 2-0 when a free kick from Josh Mullin was floated into the box, only for auxiliary centre back Nikolay Todorov to head wide when it looked easier to score. Five minutes later, United had their first shot on goal with a 25 yard effort from James Keatings, although the shot itself was high and wide of Neil Alexander’s goal.

Livingston could, and again maybe should, have doubled their advantage ten minutes before half time when Lewis was forced out of his box to deal with a long ball from Dale Carrick, only for his rather half-hearted headed clearance to land at the feet of James Penrice. The Livingston player was under pressure but did have an open goal to aim at, and he could only curl his effort from around 40 yards over the bar.

Livingston could maybe count themselves unlucky to only be 1-0 ahead at half time, having had the bulk of the play against their opponents, who in truth had not really got into the game. The United players looked rather spooked by the physical nature that the contest had become.

United did start the second half with slightly more impetus, and they did force a few early corner kicks, but the Livingston defence easily dealt with everything United could throw at them. United’s best chance of the game came ten minutes into the second half when home goalkeeper Neil Alexander, who had barely had anything to do up until this point, fumbled a long free kick in the box. He dropped the ball at the feet of Scott McDonald. However, the Australian striker, under pressure, pulled his effort wide. It proved to be United’s best chance of the game.

With 20 minutes to go, there were some further signs of life from United when a Fraser Fyvie shot was deflected wide. A couple of minutes later, after being played in by Jamie Robson, Billy King spurned a great chance by choosing to shoot from 20 yards out rather than play in the unmarked Paul McMullan. King’s shot was disappointing and lacked any real conviction, and the ball trundled harmlessly through to Alexander.

With fourteen minutes to go, Livingston sealed the points with a second goal. Shaun Byrne flicked the ball to Josh Mullin, who broke down the right and his low cross was met by Nikolay Todorov, who had moved up front from centre half, and he diverted the ball into the net off the underside of the bar.

Despite a late chance for Patrick N’koyi from yet another United corner, the result could have been even worse for United. In the last minute of normal time, Livingston substitute Raffaele De Vita curled a wonderful shot towards goal from 30 yards out, but his effort struck the inside of the post and bounced clear. In the end, Livingston had to settle for a deserved 2-0 win against a disappointingly lacklustre United. The booing from the United fans left in the ground at full time were a guide to just how lacklustre the performance had been. 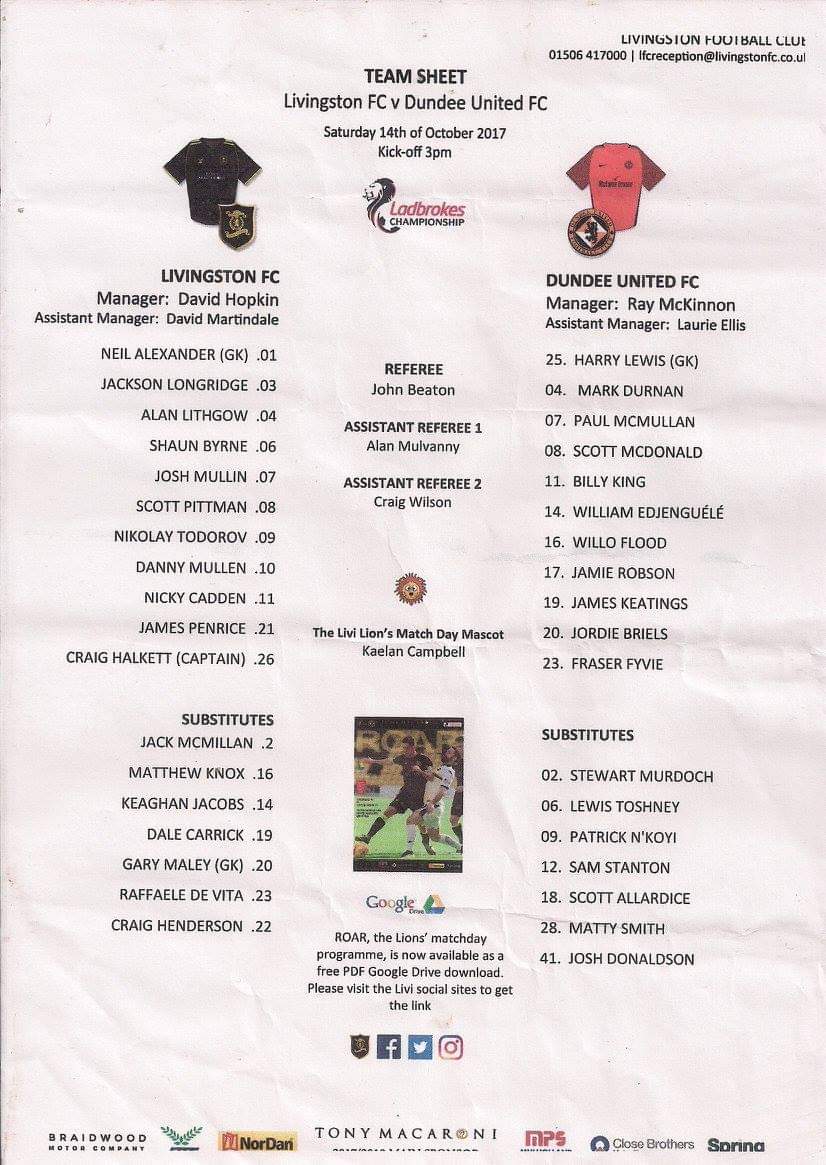