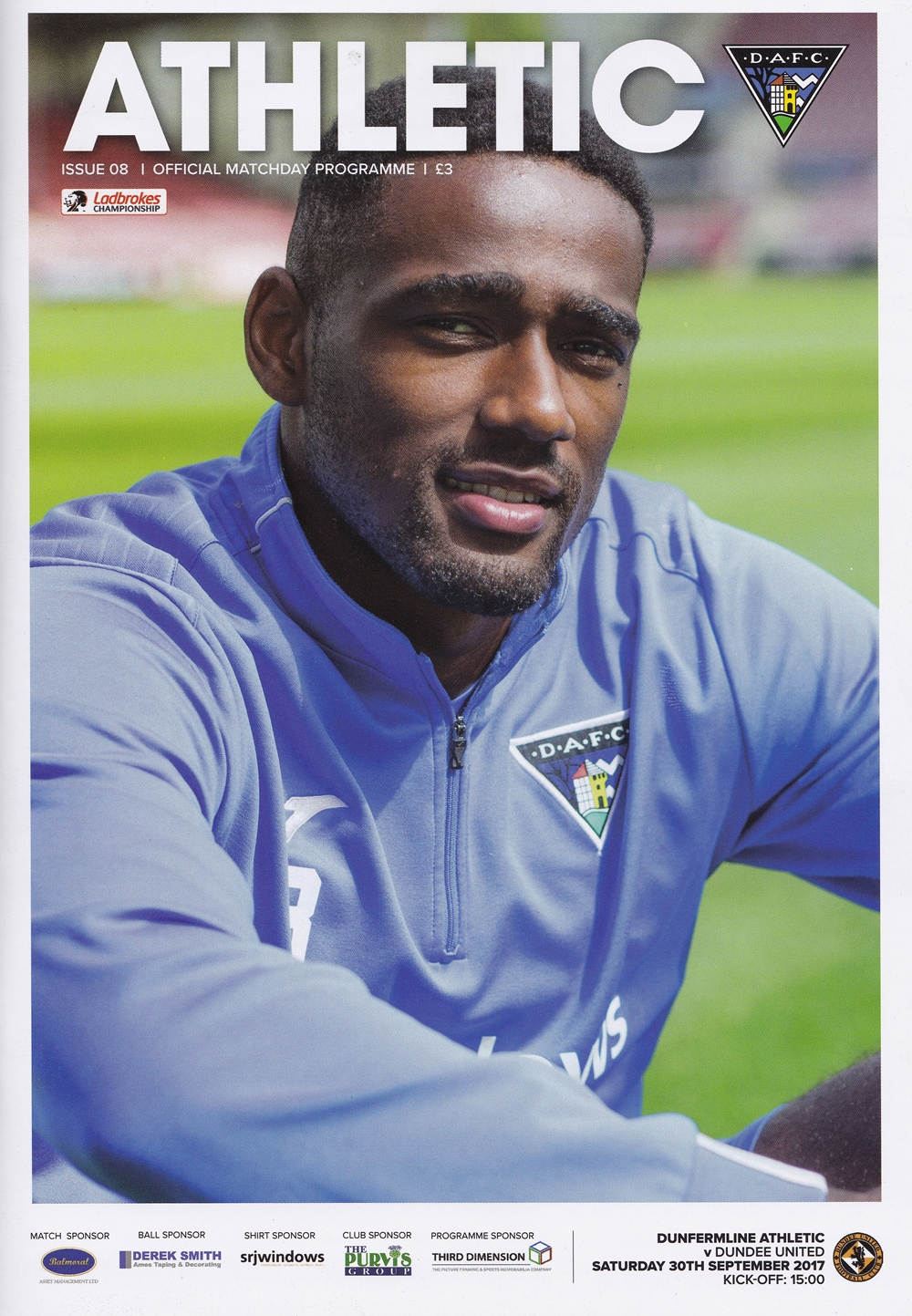 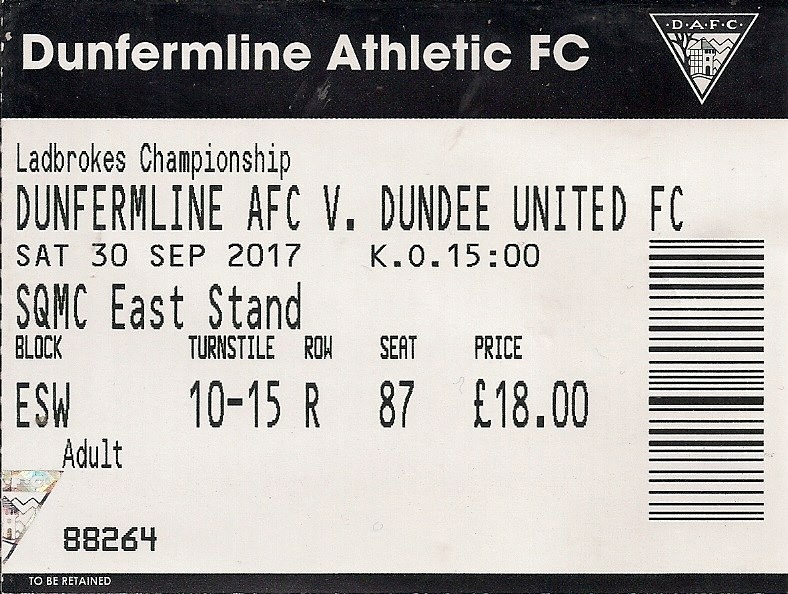 United went back into second in the league with a tremendous win over league leaders Dunfermline Athletic. United made one enforced change from the previous week’s victory over Morton, with Willo Flood coming into the team in a rather unfamiliar right back role to replace the injured Lewis Toshney. The more natural replacement, Stewart Murdoch, was sidelined by the sickness bug which had ravaged the club.

Dunfermline went into the game having scored 21 goals in their seven league games, and perhaps unsurprisingly made the early running. They forced a corner kick in the first minute of the game. Kallum Higginbotham swung in a dangerous corner from the right but Lee Ashcroft was penalised for climbing on Jordie Briels.
United came more into the game after that early scare, and were unlucky not to have a chance in four minutes when Fraser Fyvie played in Scott McDonald, but the Australian striker was marginally offside.

Largely due to the United players not giving Dunfermline any time on the ball, the game took a while to get going, with Dunfermline unable to display any of the attacking verve they had displayed in previous games. The home side were creating half chances, with Higginbotham’s volley past the post after 20 minutes being an example, but United were able to restrict them to nothing more than that. Ten minutes later, Declan McManus robbed Fyvie at the edge of the box and ran in on goal, but his low shot was saved by Harry Lewis. Soon after, Ryan Williamson fired high over the bar from 25 yards after he was played in by a short free kick from Higginbotham.

Although Dunfermline had had the bulk of the early possession, the away side took the lead after 35 minutes. Jamie Robson, who had also been a victim of the sickness bug, ran down the left and fired in a dangerous cross, which was pushed away by Dunfermline goalkeeper Sean Murdoch. However, the ball landed at the feet of Fraser Fyvie ten yards from goal, and he drilled a low shot into the net to give United the lead. It was Fyvie’s first United goal.

Former United defender Callum Morris was booked for a bad challenge of James Keatings. Soon after, McDonald followed him into the referee’s notebook for a crude foul on Jason Talbot as the game briefly threatened to boil over. Two minutes before half time, United got a crucial second goal. A free kick from James Keatings was nodded across goal by William Edjenguele, and Scott McDonald, who was in the right place at the right time at the back post to knock the ball over the line to double United’s lead.

It could have been even better for United at half time. In first half stoppage time, United broker forward through Paul McMullan, who had a shot which was deflected into the air. Billy King got onto the ball on the edge of the area, but his shot looped onto the bar and was cleared by the home defence.

Dunfermline forced a couple of corners after half time as they looked to get back into the game. Higginbotham got over a good cross which was caught by Lewis, but as in the first half Dunfermline were restricted to set pieces and half chances. Lewis was forced into action again ten minutes into the half from another corner when he dropped the ball, causing panic in the away defence, but Flood was able to clear the ball before any Dunfermline players could capitalise.

On the hour mark, United scored a third goal. A Keatings free kick rebounded off the Dunfermline wall. Dunfermline could not clear the ball however, and from the right hand side Flood crossed the ball back over. The ball was again deflected towards Fraser Fyvie, who took a touch on his chest before smashing a 25 yard drive on the half volley into the top right corner of the net.

From then on, United largely dominated possession against opponents who were beginning to look rather ragged. Five minutes after the goal, McMullan surged forward and looked set to slot the ball past Murdoch, but he fell to the floor under a challenge from the home defence. He rather half-heartedly claimed for a penalty, but the referee made the right decision in waving play on. Robson then broke forward again but was crowded out before he could get a shot away.

Dunfermline got an unlikely foothold back into the game with 13 minutes to go. Jason Talbot’s deflected cross landed on the head of Callum Smith, the ball floating just out of the reach of Harry Lewis and into the net. This led to a rather frenetic period of play as the home players sensed the game could be rescued, which coupled with some nervous United defending meant that the last few minutes of the game were not as comfortable as the probably should have been.

The win allowed United to leapfrog their opponents into second in the table, only one point behind league leaders St Mirren. The nature of the victory was heartening, with what was one of United’s best performances since relegation against a side who still look like being one of their biggest obstacles to promotion. 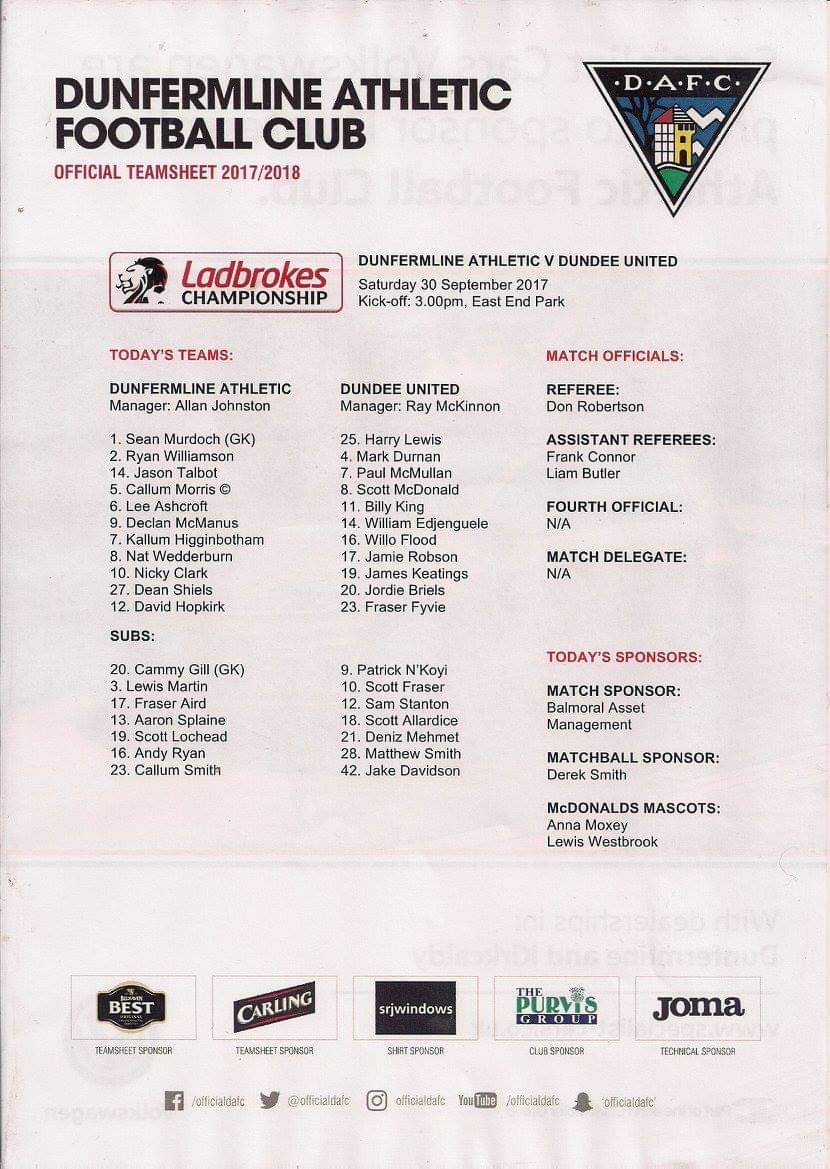