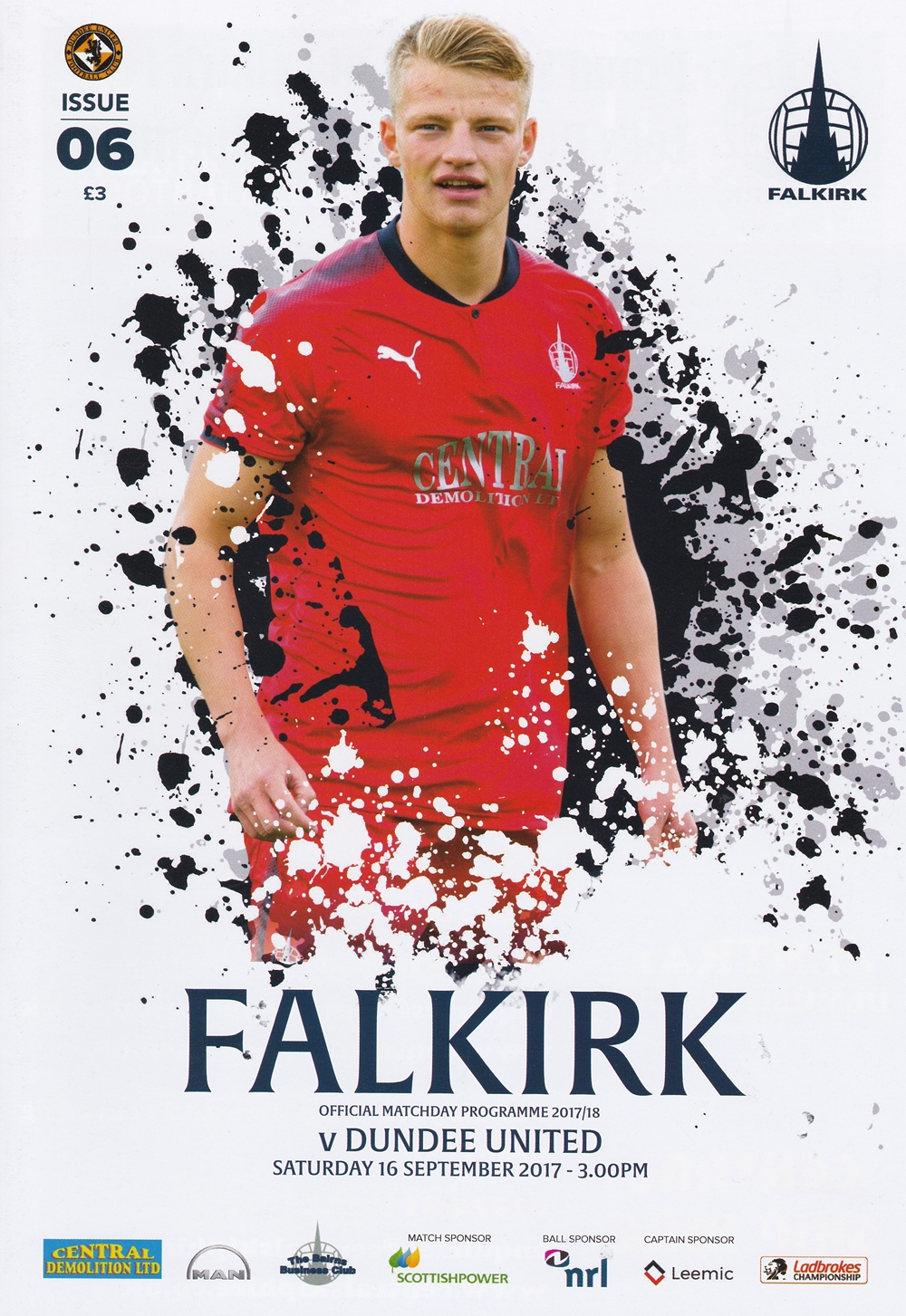 United remained two points off the top of the Championship table after a rather insipid 0-0 draw against Falkirk, in a game where two teams who were low on confidence after poor results largely cancelled each other out. Although it was an improved performance from United, it was not enough to overcome the side who had finished as Championship runners-up in the previous two seasons.

Under pressure after the uninspiring performance in the previous week’s home draw with Dumbarton, Ray McKinnon made three changes to the starting line-up, starting with the 4-4-2 formation which finished the Dumbarton game. Lewis Toshney, Billy King and Mark Durnan replaced Scott Fraser, Stewart Murdoch and William Edjenguele.

The first chance came after four minutes, and it came for the home team. An unmarked Rory Loy met a Tony Gallacher cross from the left, but his header flew over the bar. Almost immediately afterwards, at the other end Scott McDonald flashed a shot across the face of the Falkirk goal. Five minutes later, Billy King fired a good ball across the face of the Falkirk goal after being played in by Paul McMullan, but no United player was able to take advantage.

Ten minutes into the game, Paul Quinn, who was feeling the ill effects of a tooth extraction earlier in the week, was replaced by Edjenguele. United continued to have the better of things, and after 16 minutes Mark Durnan headed a McMullan corner over the bar. The away side continued to have the better possession without creating too many threatening opportunities, although after 26 minutes they had another chance when Jamie Robson headed a Jordie Briels floated cross into the box over the bar. There was a near miss after half an hour when a Robson cross was kept in play by Billy King, and Fraser Fyvie met the ball on the half volley at the edge of the box. From away end, the ball looked as if it was heading in, but it ended up going a few inches wide of the post.

The two best chances of the half came in its last few minutes. With seven minutes to go until half time, another Gallacher cross was met by the head of Craig Sibbald, but his header clipped the top of the crossbar. Despite the protests from the Falkirk bench, a goal kick was given, although it did not appear that Harry Lewis got a touch on the ball. Then, with one minute to go until half time, McDonald sent a diving header over the bar from a Billy King cross.

United could perhaps argue that they deserved to be ahead at half time based on the chances created, but the game remained goalless.

There was a bizarre incident just after the hour mark when Harry Lewis kicked the ball out of play to allow a Falkirk player to receive treatment. However, the Falkirk players did not give the ball back, and McMullen put in a bad challenge on Aaron Muirhead, for which he was booked. William Edjenguele and Jordie Briels were booked soon afterwards as the game briefly threatened to boil over.

Soon after, United nearly took the lead in comical fashion as a mishit backpass from Conrad Balatoni nearly looped over the head of Falkirk goalkeeper Robbie Thomson and into the net. Fortunately for Falkirk and for Balatoni in particular, Thomson was able to collect the ball before it crossed the line.

As the game drew on. United came back into the game and again were very close to taking the lead with eight minutes to go. Paul McMullan hit a cross from the United right which evaded everyone in the middle, including Thomson in the Falkirk goal, and the ball hit the bar and somehow stayed out. Falkirk were able to clear the ball before any United player in the middle could exploit the situation.

Falkirk had a late chance to win the game with a stoppage time free kick from Alex Harris, but he sent his effort well over the bar.

That was the end of the chances, and a rather cagey game ended goalless, an outcome which under the circumstances probably did not entirely suit either team, but was definitely the most either team deserved. 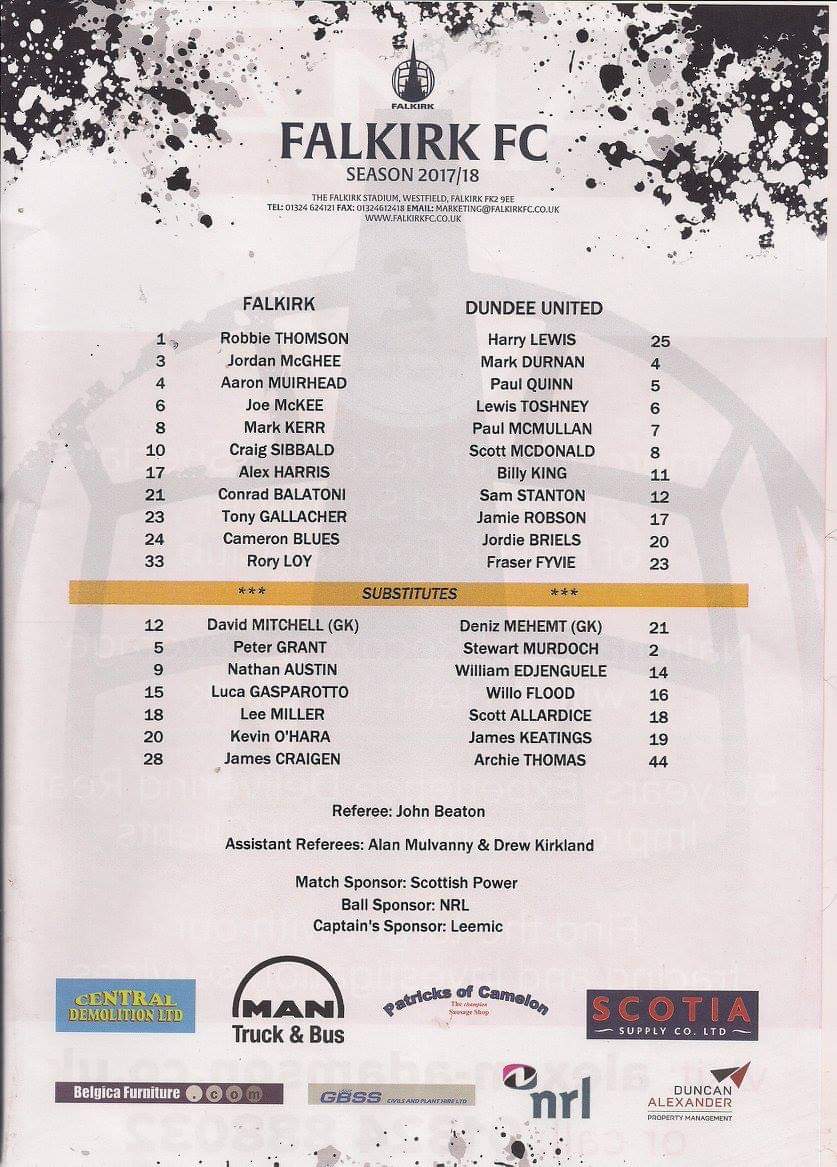