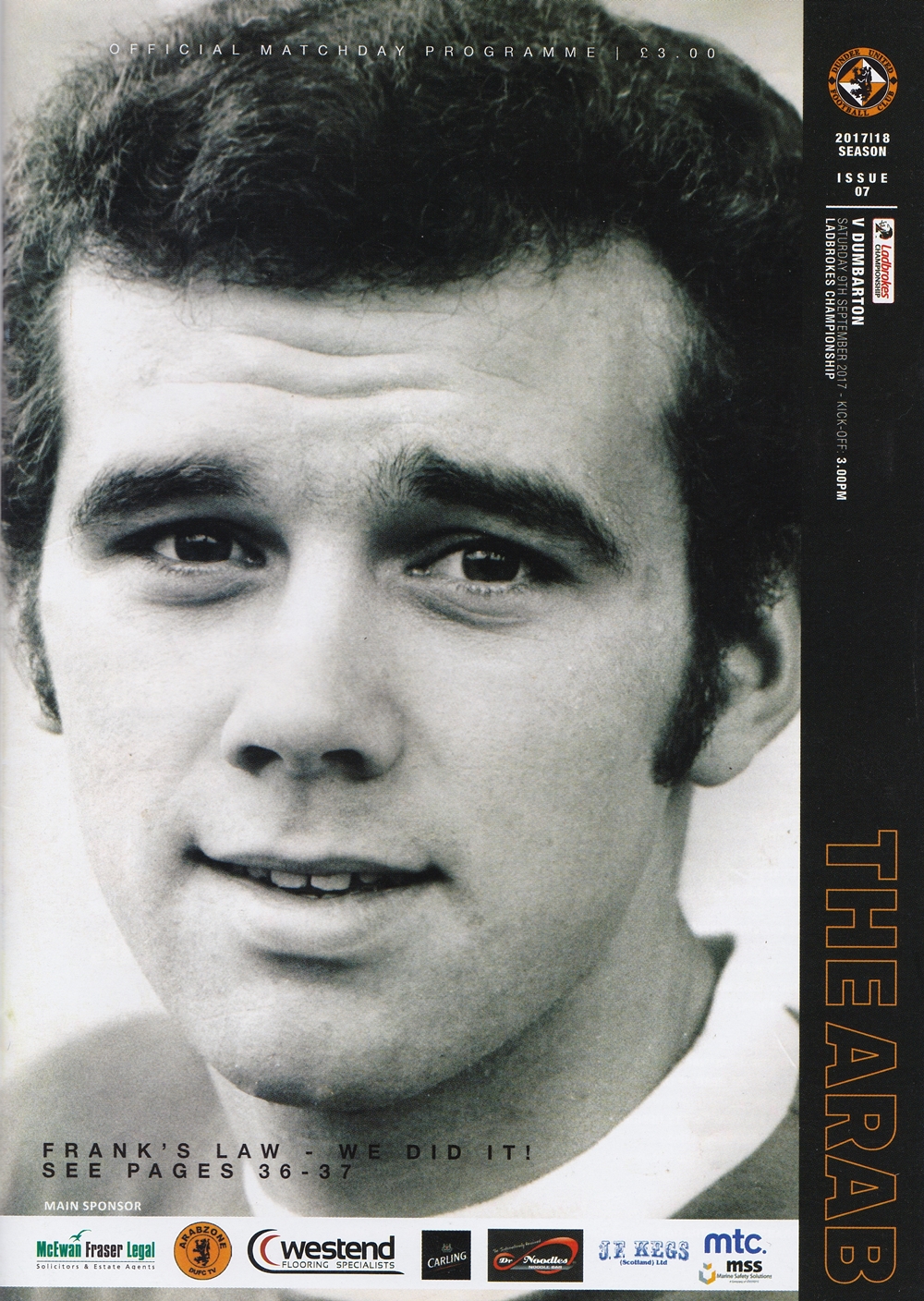 Dundee United’s rather stuttering league form continued with a disappointing 1-1 draw at home to Dumbarton. However, given United only equalised with three minutes to go, and bearing in mind the overall balance of play, they were probably fortunate to even gain one point from this match. Ray McKinnon reverted to a more familiar starting line-up after the Irn Bru Challenge Cup game against Alloa Athletic. Three changes were made from United’s previous league game against St Mirren, with William Edjenguele, Jordie Briels and Scott Fraser replacing Mark Durnan, Willo Flood and Billy King.

Any hope United would start the game on the front foot were extinguished when they found themselves a goal down after a mere four minutes after some comically inept defending. Stewart Murdoch allowed a rather aimless cross field ball to bounce off him, which gave Tom Walsh possession on the United right. His cross into the box did not appear to pose any threat. However, Paul Quinn inadvertently flicked the ball on, Jamie Robson stood motionless at the back post to allow Tom Smith to steal in and knock the ball home with his thigh from a couple of yards out. Perhaps because it was such a soft goal to lose, the United players looked rather shellshocked by events and as the game unfolded most of them never really regained their composure. They did have a chance two minutes later when Sam Stanton drove the ball over the bar from 20 yards out, but it was the visitors who made most of the early running, much to the frustration of the United supporters. It was a full twenty minutes into the game before United’s next chance. Paul McMullan was the architect, with a clever ball through to Stanton who in turn fed Scott Fraser, but his 20 yard first time effort was saved well by Dumbarton goalkeeper Scott Gallacher. After 30 minutes, McMullan played Jordie Briels through on goal. The Dutch midfielder was able to round Gallacher, but sent his shot wide of the post from the narrowest of angles. Other than a tame effort from Scott McDonald and a corner kick from McMullan that Gallacher had to punch off the line, that was the extent of the first half chances for United, and the boos raining down from the stands as the half time whistle blew told their own story.

In an attempt to change the balance of play, Ray McKinnon brought on Patrick N’Koyi for Stanton at half time, and the striker almost had an immediate impact. Three minutes into the half, he took a pass from McDonald and hit a fierce shot was deflected wide. He then set up McMullan, who sent in a cross on the right, however nobody in the middle was able to take advantage. The away side did continue to create chances themselves, and United had a scare on the hour mark when Harry Lewis fumbled a free kick from Dimitris Froxylias, but he was able to smother the ball at the second attempt before any Dumbarton player could pounce. United broke up the other end and Jordie Briels hit a 25 yard shot which Scott Gallacher did well to push away for a corner kick. Four minutes later, Paul McMullan sent a shot well over the bar from 12 yards out. On the 70th minute, McMullan should have equalised for United. Substitute Billy King sent over a lovely cross from the left wing, and McMullan had lots of time and space at the back post, but somehow managed to head the ball weakly over the bar with almost the entire goal to aim at. Five minutes later, Dumbarton came very close to going 2-0 up when Tom Walsh hit a dipping long range that which Lewis somehow managed to divert onto the crossbar. Gallacher was then forced into a good save at the other end as Billy King tested him at his near post. The game was beginning to run out of steam but almost out of nothing, an equaliser arrived with three minutes to go. Dumbarton defender David Wilson made a rather tired challenge on Billy King as he looked for space on the edge of the box, and from the resultant free kick substitute James Keatings curled a wonderful shot into the top corner of the net, leaving Gallacher helpless in the Dumbarton goal. United had most of the possession in the last couple of minutes of the game, although there was no time for a winner. United were forced to settle for the draw which, in truth, was the very most they deserved on the balance of play. 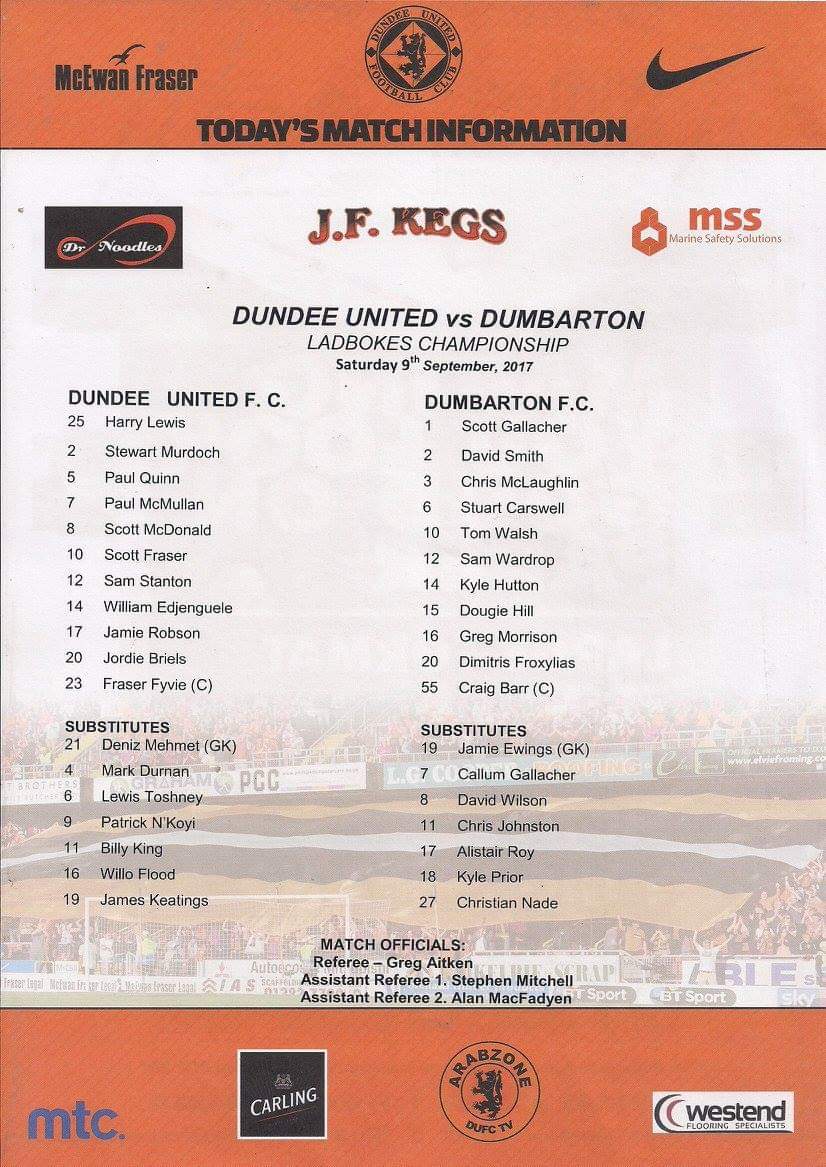