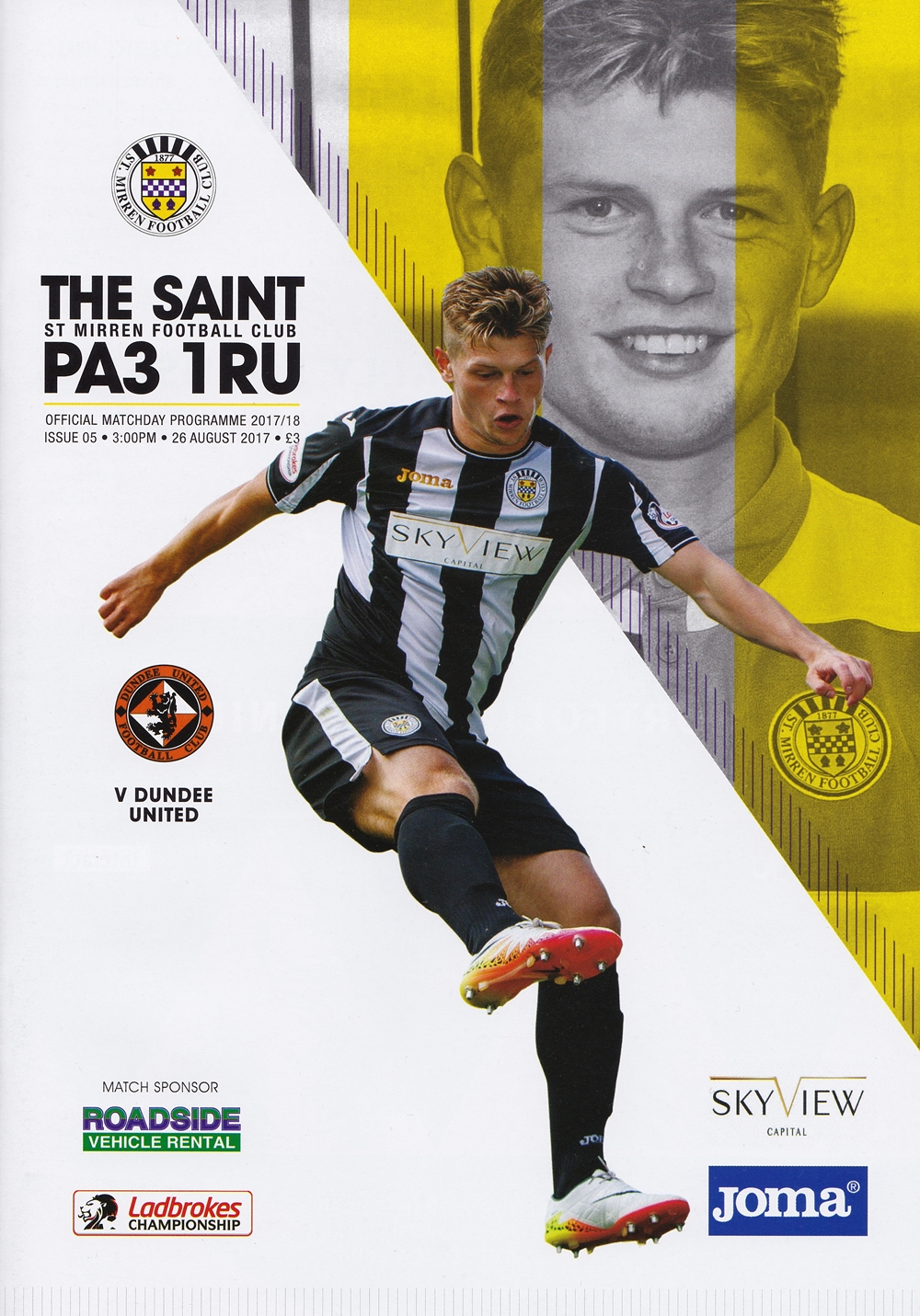 United’s 100% league record this season abruptly ended with a comprehensive beating against St Mirren in Paisley. United made two enforced changes from the previous week’s narrow win against Brechin City, with Willo Flood and Paul McMullan coming in for the injured James Keatings and Scott Fraser.

Although St Mirren narrowly avoided relegation last season, their form in the second half of the season was magnificent, and they were fully expected to provide United with a strong challenge.

United actually started the game well, with no hint of the beating they were to receive. Although Stelios Demetriou tested Harry Lewis in the first minute with a fierce shot, United created the bulk of the early opportunities. After three minutes, former United keeper Craig Samson was forced to make a good save from Sam Stanton after a good cross from Billy King, and a minute later Samson was again forced into action, this time from a low drive from Paul McMullan.

The chances continued to come, and at least in the games initial stages they were mostly for the away team. After 15 minutes, McMullan fell to the ground under little pressure in the box after a mazy run, and was booked for simulation. A minute later, Stanton was unlucky to see a first time shot deflected past the post. From the resultant corner, King played the ball to Scott McDonald who shot on the turn, which was blocked by Samson before being cleared by the home defence.

However, the home side soon began to get a firm grip on the game, and as the first half wore on they began to dominate possession and create chances, as the United players struggled to have any real influence on the game. The first chance was a tame shot from Gavin Reilly which Lewis was able to save easily.

Despite that, St Mirren’s first goal was not long in coming. Lewis Morgan picked the ball up in the midfield, and was allowed to run unchallenged towards the United penalty area. He was given the time and space to drill a low shot from 25 yards into the bottom left hand corner of the net. As good a finish as it was, he was helped by the lack of any challenge from the United players.
T
he goal, if anything, galvanised St Mirren and United were struggling to hang on. After 36 minutes, St Mirren were close to doubling their lead when Ian McShane hit a free kick which Lewis did well to keep out. From the rebound, Gregor Buchanan hit the post, although he was adjudged to be in an offside position as he did so.

There was time for two more good St Mirren chances before half time. Firstly, Stewart Murdoch was short with a headed pass back to the keeper, and Reilly was able to intercept the pass. However, his shot was off target. And then, three minutes before half time, St Mirren hit the woodwork again, with Buchanan heading off the bar from a McShane corner.

United were somewhat lucky to go in at half time only one goal down, but any United fan expecting a reaction in the second half were to be disappointed. A mere three minutes into the half, St Mirren went 2-0 up. A clearance from the United defence landed at the feet of Lewis Morgan on the edge of the box, and he curled a wonderful left foot shot into the far top corner of the net, leaving Lewis with no chance. Soon after, a rare United chance came when Jamie Robson drove forward with the ball, but hit shot was just wide. Fraser Fyvie then missed the target from a shot outside the box as United looked for a way back into the game.

However, any resistance to the St Mirren surge was brief. On the hour mark, United had another narrow escape as a volley from Stephen McGinn flew just past the post with Lewis beaten. Although McMullan hit a free kick just wide after he was fouled by Adam Eckersley, the chances continued to be mainly for the home side. With 20 minutes to go, Lewis was again forced into action from a Cammy Smith shot after more good work from Morgan. However, the third goal finally arrived with 12 minutes to go. Again, Lewis Morgan was involved, this time by making a great run on the right wing before setting up Ian McShane on the edge of the area, who was able to take his time before hitting a shot past Lewis.

That was the end of the scoring, although Murdoch did have a late shot saved by Samson. If anything, the margin of victory flattered United, who were lucky not to receive a more comprehensive beating. As Ray McKinnon admitted after the game, United were simply not good enough, and could not compete with a young and hungry side who played significantly better on the day. 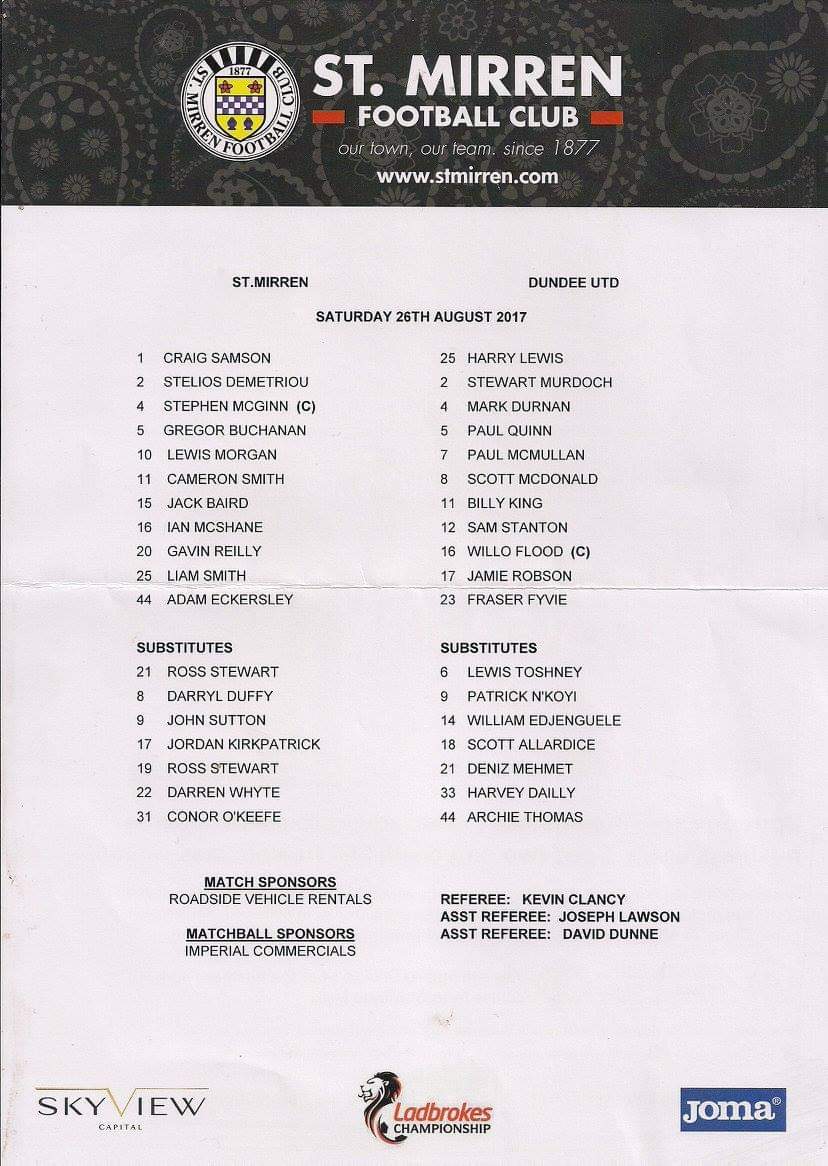