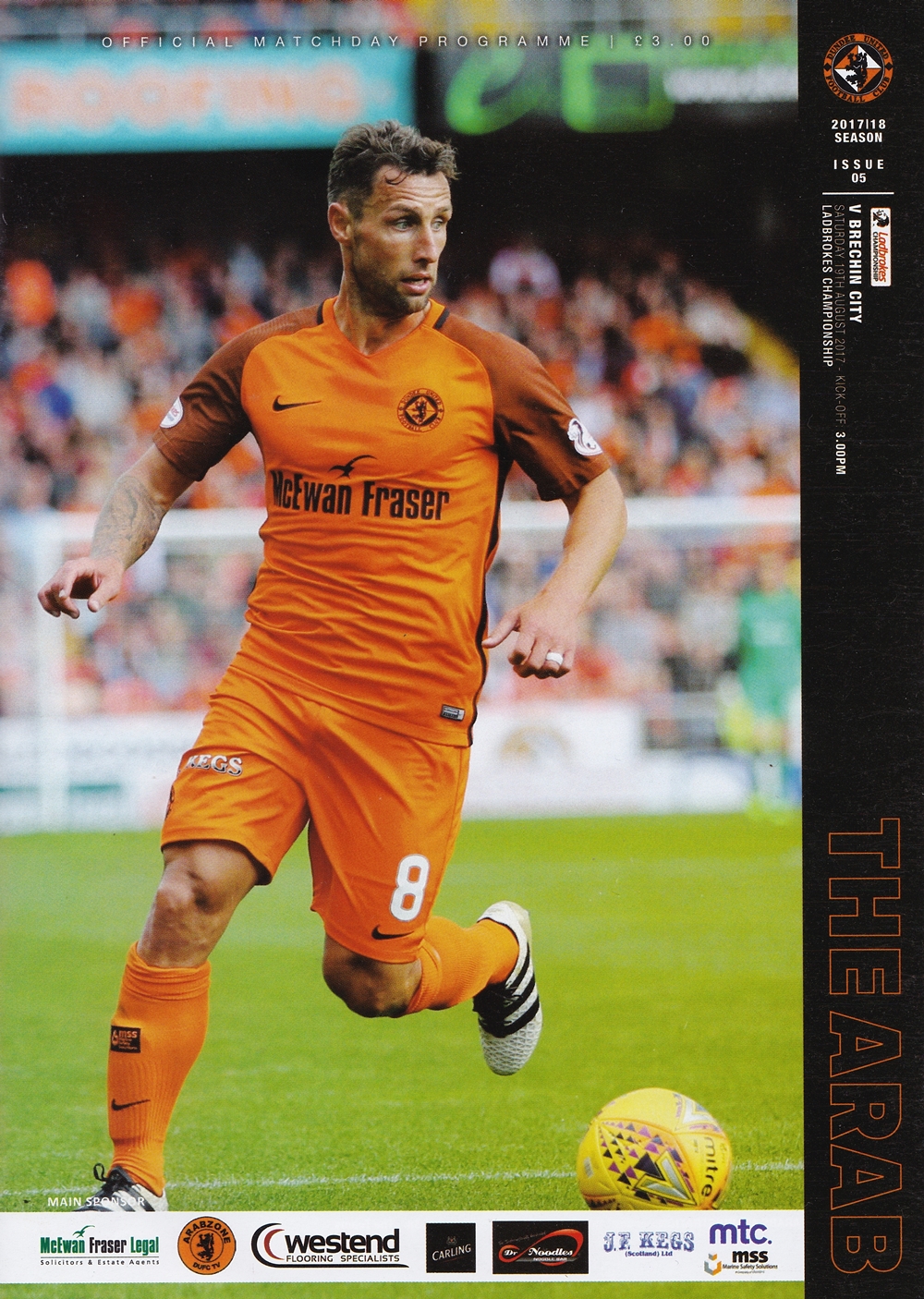 United kept up their 100% record in the Ladbrokes Championship with what was a rather uninspired win over a resolute Brechin City side.

There were only two changes from the previous league game against Queen of the South, with Paul Quinn and Scott Fraser coming in for William Edjenguele and the suspended Paul McMullan.

Of the team which started the midweek Irn Bru Cup win over Cowdenbeath, however, it was only the aforementioned Quinn and Fraser, as well as James Keatings, who retained their starting places.

Given the disparity in budgets between the two teams, United fans could be forgiven for thinking this would be an easy game, but it proved to be anything but.
Although that eventually turned out to be the case, United did create chances in the early stages of the game. Within 60 seconds of the game starting, Scott Fraser played in Billy King who hit a low shot from inside the box, however it was blocked by a Brechin defender. Ten minutes into the game, the lively Fraser cut in from the right and hit a lovely curling shot, which Brechin keeper Graeme Smith brilliantly tipped over the bar. United forced several corners in the early stages, although the delivery from most of these corners were rather disappointing.

As the game wore on, Brechin began to gain in confidence and get a foothold in the game. After 19 minutes, Kalvin Orsi hit a cross that Andy Jackson was inches away from tapping in at the back post. Soon after, Jackson himself hit a great ball across the face of goal, but no Brechin player was able to take advantage and the ball was cleared.

There was a further chance for United after 26 minutes, but James Keatings’ free kick could not find a United player, and Smith was able to palm the ball clear. Scott McDonald shot from the rebound, but the ball was blocked by the away defence. Ten minutes later, Keatings narrowly failed to reach a great through ball, and Smith was able to snuff out any danger.

Just before half time, as the frustration of the United fans began to become evident, Brechin were unlucky not to take the lead. A great cross from the left from Jordan Sinclair was diverted on to the post by Mark Durnan. The ball rebounded off Harry Lewis and back off the post, before Lewis was finally able to react and smother the ball. The United players went in at half time in no doubt of what the home support thought of their lacklustre first half performance.

The second half did not immediately show any improvement from United. Indeed, Brechin were again unlucky not to take the lead, as Jackson again found himself through on goal, only for the chance to be snuffed out by a desperate last-ditch tackle from Paul Quinn. Aron Lynas then crossed for Sinclair and he hit a superb volley from 20 yards which went just past the post.

There was another let off for United soon after. Former United player Euan Spark laid the ball off for Jackson, who again hit an effort just wide.

As the game drew on, United began to get more possession and began to create some opportunities. Firstly, a good pass from Fraser played McDonald through on goal, however he was off balance and shot wide. Durnan then got his head on a rare well-delivered corner kick, but the ball was slightly too high and he was unable to direct the header on target. McDonald then hit a cross across the face of goal, although again there were no takers.

The breakthrough finally arrived with ten minutes to go. A cross from Stewart Murdoch picked out substitute Patrick N’Koyi, and as the ball rebounded off him Scott McDonald was in the right place and knocked the ball over Smith and into the net from around ten yards out. The relief from the United fans and players was palpable.

There were chances for United to make the game more comfortable, N’Koyi was having an impact on the game, and he hit a low cross which the away defence did well to clear for a corner before McDonald could pounce. From that corner, N’Koyi wasted a great chance to double United’s lead, sending a free header past the post when it looked easier to score.

Brechin did put some late pressure on the United defence as they chased an equaliser that their play probably deserved. Right at the end of the game, Sean Crighton got the ball on the edge of the United area and hit a right foot lob which was only just over the bar.

Despite the late pressure, United were able to hold on for the win, and keep their place at the top of the Championship. Although better performances will be needed in future games if United wish to stay there. 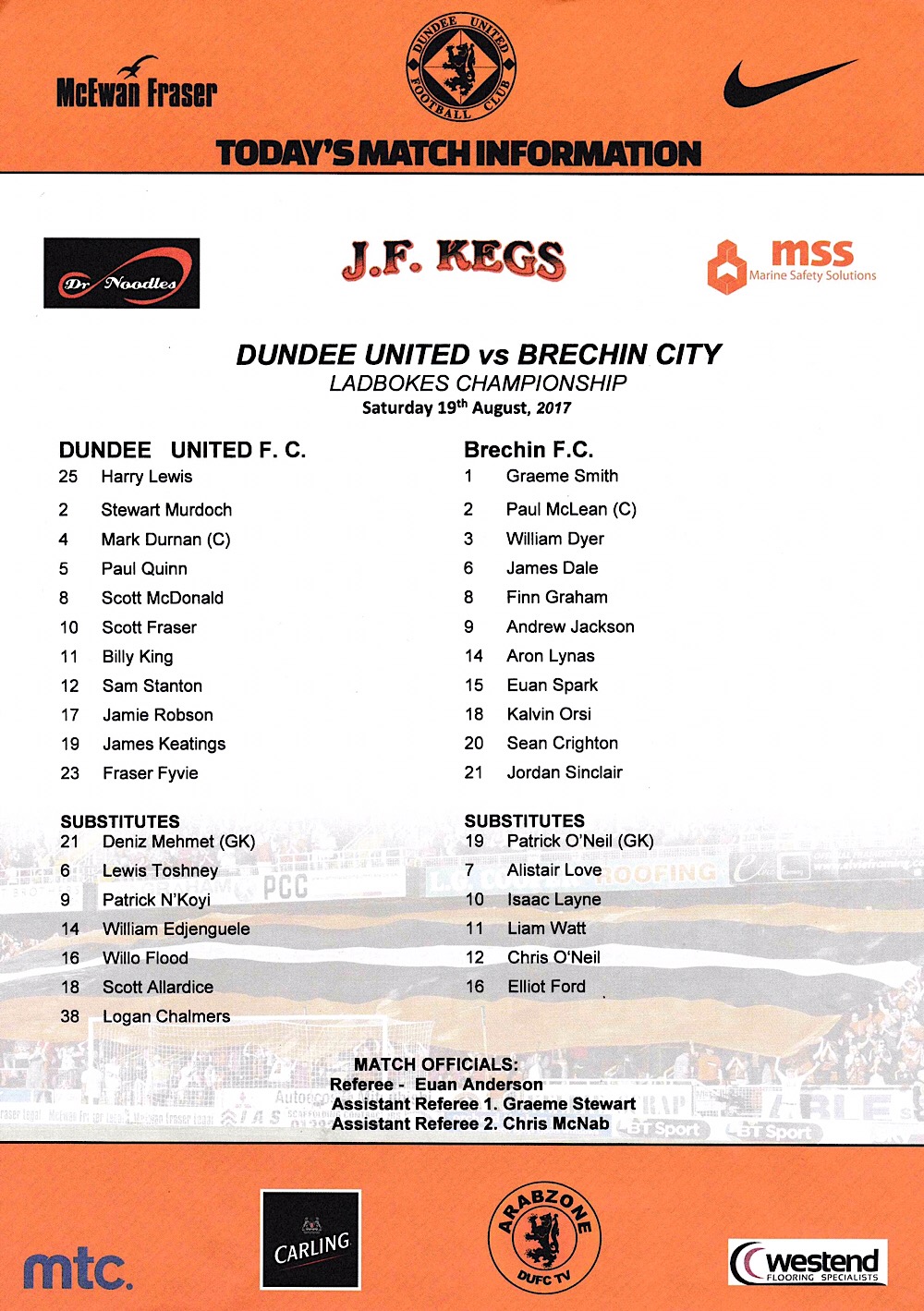