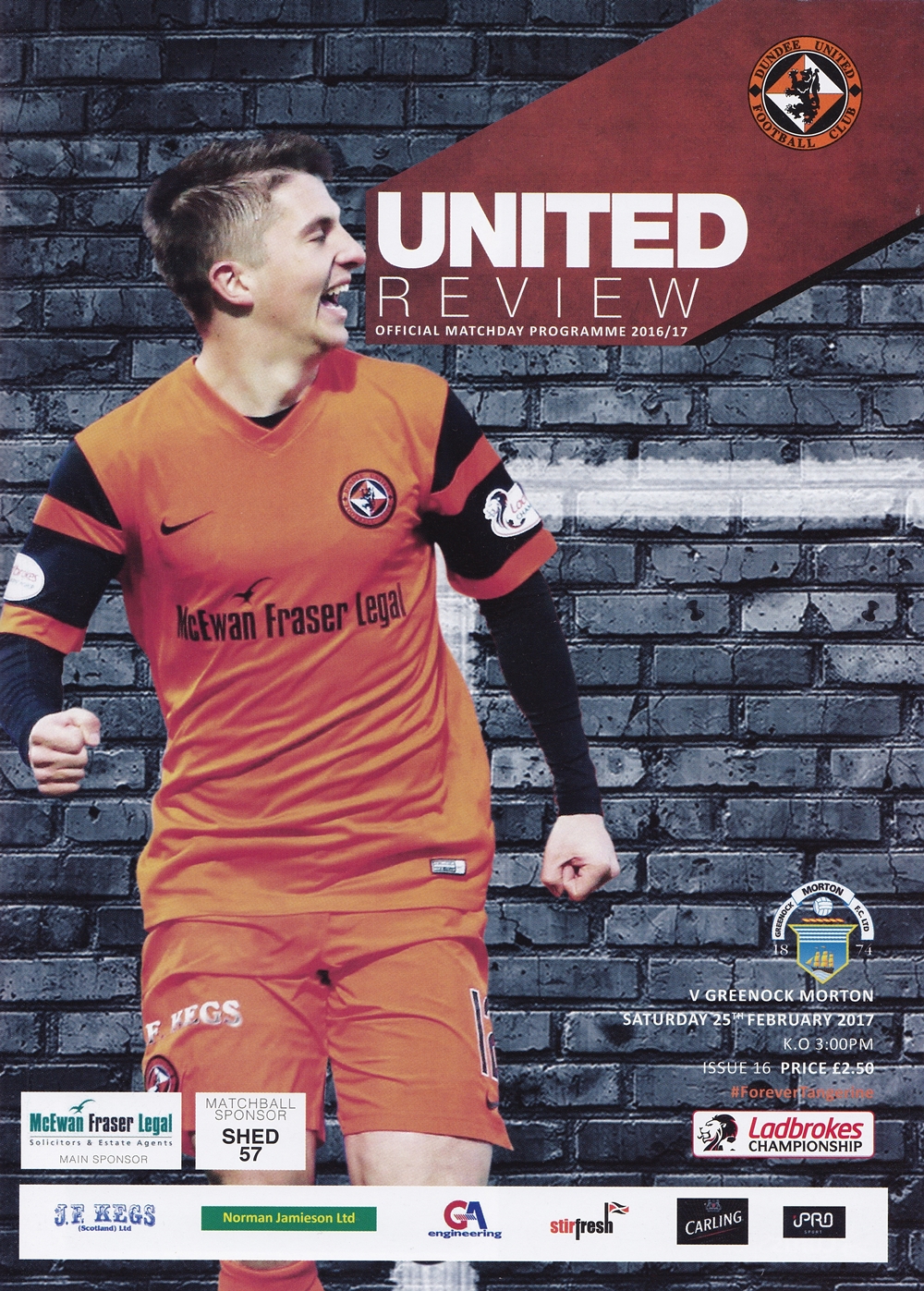 Dundee United welcomed back Cammy Bell in goal for the visit of Morton as Ray McKinnon made four changes from last weeks victory at Palmerston with Murray, Dillon, Nicholls and Zwick making way for Van Der Velden, Mikkelsen, Durnan and Bell. Morton boss, Jim Duffy, named the same starting eleven that took a point last time out against Falkirk.

Morton set the tone for the first half inside ten seconds, Aiden Nisbett giving Van Der Struijk no time as he attempted to knock the ball up field from kick off. There was a similar pattern to the opening twenty minutes as both teams attempted to bypass the midfield and put pressure on their opponents back four. Morton’s Shankland had the two best opportunities of that period but on both occasions Edjenguele cleared for a corner. As the game became more open, United began to carve out their own opportunities. After a succession of corners, which Gaston struggled to deal with, Fraser found Andreu at the edge of the area, but his usual accuracy deserted him as he could not get a meaningful effort on target. Clever play between Telfer, Fraser and Andreu saw weak appeals for a penalty as the Frenchman appeared to be caught on the edge of the six yard box while attempting to shoot. Van Der Velden played in Mikkelsen with a great ball and despite an excellent touch the big striker could not get enough on the ball to beat Gaston and the chance passed. As the game passed the half hour mark it was Andreu again who had an effort on goal, set up by Fraser, but again his effort was wide of the target. Mikkelsen also tried his luck from distance as the bulk of chances were falling to the men in tangerine. Morton had a great chance to take the lead when Shankland found himself in acres of space inside the United area, but his driven cross found no takers as another opportunity went begging. Morton did take the lead five minutes before the break. A corner from the left was met at the back post by Morton skipper Lee Kilday, his bullet header fired into the roof of the net as Bell struggled to cover the ground to his back post. United had a final chance before the break, but the United front men failed to capitalise on clever play by Dixon down the left.

The second half flowed in only one direction from the blow of the whistle. With wave after wave of United attacks it was only a matter of time before the equaliser would arrive, but it did take it’s time and when it came it arrived in bizarre fashion. Eight minutes into the half Fraser had the best chance of the game, but blazed over wildly after Telfer played him through with a fantastic ball. As United continued to press they left a few gaps at the back, but Morton failed to put any pressure on the United defence. Simon Murray’s first touch produced a fantastic reaction save from Gaston, after Mikkelsen’s clever knock down. Murray’s pace was causing problem time and again for the Morton defence. Mikkelsen was replaced by Coote as United looked to change shape in an effort to take one of their many chances. It took United until seven minutes from the end to score an equaliser, after several corners Fraser swung in a cross which cannoned off Mark Durnan passed Gaston, who was rooted to the spot. United then piled further pressure on the Morton defence, throwing Durnan up front to assist the tireless Murray, who had two great chances to grab a winner, but on both occasions Gaston rescued Morton. Forbes had a chance in the final minute but Bell was equal to his effort.