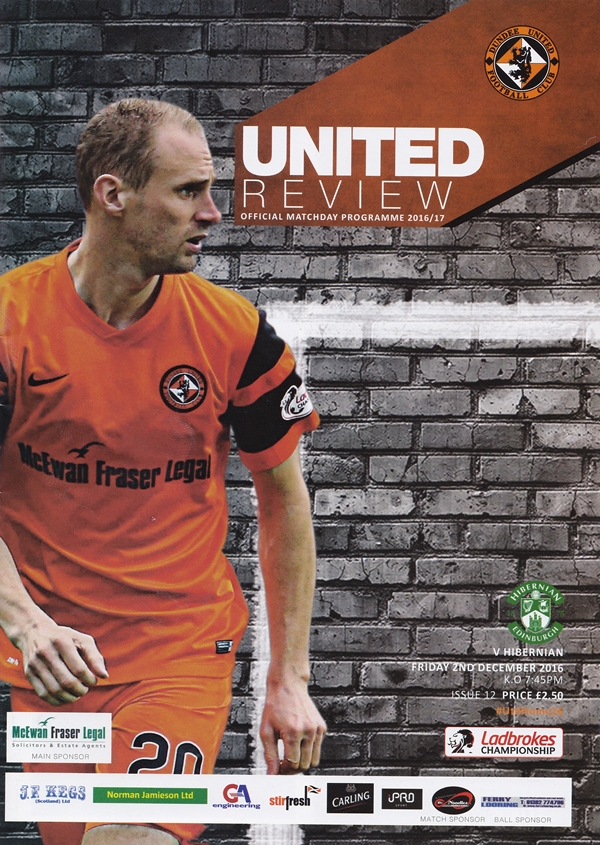 The clash may have been against the top two sides in the Ladbrokes Championship, but there was little proof of that in a poor first period. United started the brighter, favouring possession over penetration, and even when the Tangerines were reduced to ten men, Blair Spittal requiring lengthy treatment for a face knock, they maintained possession and had the first real chance of the game. Van der Velden and Andreu linked well in the middle of the park and the latter floated a ball into the path of the onrushing Telfer, but the Hibs keeper read the play well and came out to thwart the attack. Grant Holt was lucky to only concede a foul as his late challenge on Andreu could have resulted in a caution for the former English Premiership player. Andrew Shinnie was on target with Hibs’ first effort on goal on fourteen minutes, but Cammy Bell was not troubled by the midfielder’s well struck shot from 25 yards out. David Gray then put in a fantastic challenge as United threatened down the left, neat one touch football left Spittal lining up a cross, but the Hibs’ skipper was on point to put in a well-timed tackle and clear the danger. Tony Andreu then tried his lick from 35 yards as the ball broke outside the area, his deft chip was only just over the bar as Marciano looked rooted to the spot. Arguably the best chance of the half came for United just after the half hour, Hanlon played a loose ball that was intercepted by Andreu, he drew two defenders and played the ball into Van Der Velden, who looked to have the simplest of tasks of rolling the ball into the unmarked Fraser, but the Dutchman’s touch let him down and the chance was lost. Blair Spittal then played a poor backpass that Boyle should have capitalised on, but the striker’s first touch was poor and Edjenguele cleared to the delight of the huge United support. When the ball broke at the opposite end of the park, Fraser dragged an effort wide. This was followed by a Spittal effort that McGregor did well to deflect over the bar from three yards out. Andreu then had two efforts in quick succession as the half ended, with neither causing any trouble to the Hibs keeper.

If the huge crowd of over ten thousand had worried that the second forty-five minutes would have failed to spark into life, they did not have long to wait. Neil Lennon’s men started the half on the front foot and were driving at United, but it was a United attack that ignited the first real action of the game. Scott Fraser did well to control the ball on the edge of the area and was caught as he skipped past Fontaine, however referee Madden booked the United player for simulation. The play raged to the other end, as the Tannadice faithful voiced their disagreement with the decision, when a ball played into the speedy Boyle, Toshney was always going to be late to the party and sent the Hibs player sprawling inside the box. With Lennon pointing at Martin Boyle to take the spot kick, rather than Grant Holt, the young striker then hit a weak effort, which Cammy Bell did well to parry away to the delight of fans and players alike. Just before the hour mark, Holt, still frustrated from the penalty, grabbed Flood, in an attempt to get the ball, and as a full scale rammy broke out, the striker looked like he threw an elbow in the direction of Tony Andreu. Referee Madden though decided that a booking for Flood and Holt was sufficient in the circumstances. Andrew Shinnie then drew a great save from Bell as Hibs looked to make the breakthrough. The league’s top scorer, Jason Cummings came off the bench for the ineffectual Boyle. David Gray and Spittal then traded efforts with neither troubling the opposition keeper.

The introduction of Simon Murray had an immediate impact, Scott Fraser’s pass down the right allowed Murray a run on the Hibs defence, he skipped past Stevenson, dragged the ball away from a sliding McGregor and gave Fontaine no option but to take him out from three yards as he was about to slot home. Again, puzzlingly, the referee only produced a yellow card in what was a clear goal scoring opportunity. United’s top scorer Tony Andreu made no mistake for the spot kick pushing the ball wide of the Israeli keeper, Marciano. The remaining eighteen minutes must have felt like hours for the home support, but despite bringing on ex United front man Graham, Hibs could only muster long range attempts that did not trouble Cammy Bell in the home goal. The referee added on an additional five minutes just to prolong the agony and ecstasy for the respective fans but as he did blow the final whistle Tannadice erupted as United emerged with three very important points.