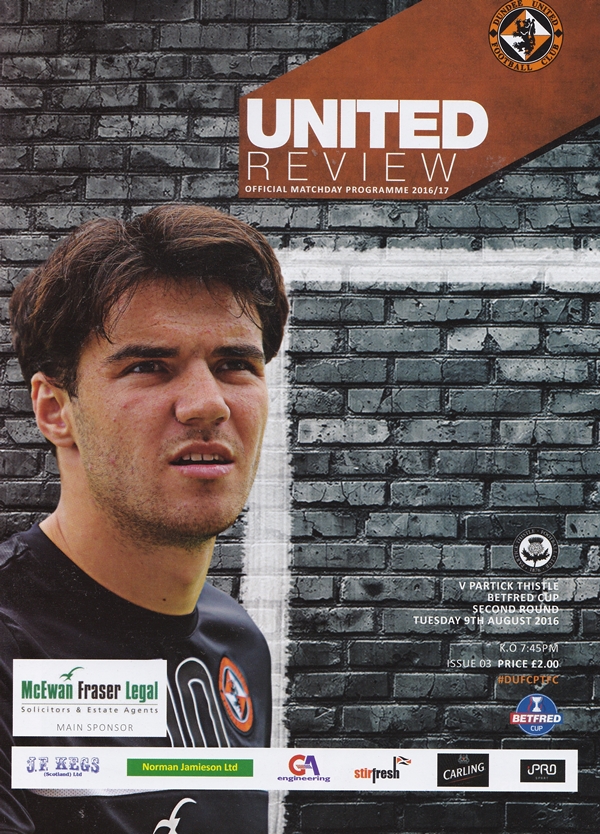 After what was ultimately a disappointing 1-1 draw at home to Queen of the South in the opening match of the Scottish Championship season, United’s attention turned towards the visit of Premiership side Partick Thistle to Tannadice in the League Cup Second Round. United had already faced top flight opposition this season when they faced Inverness CT in the League Cup Group Stages and had come away with a 1-1 draw and a victory on penalties and they were hoping to go one better against the men from Firhill. Ray McKinnon made three changes to the side which had started at the weekend with Simon Murray and Sean Dillon dropping to the bench and Nick van der Velden missing out through suspension. Scott Fraser returned to the midfield after serving a one match ban, Lewis Toshney retook his right-back berth having missed out on Saturday through a calf strain and Blair Spittal was handed only his third start of the season. There was a familiar face in the Thistle side which Chris Erskine lining up against his old side only months after he had left Tannadice on a free transfer.

With Sean Dillon benched and Paul Dixon side-lined through injury, Willo Flood was entrusted with the captain’s armband and his first act of the evening was to lose the coin-toss which resulted in United shooting down the slope towards the Eddie Thompson Stand in the first half. Ray McKinnon’s side started the match positively and went close early on when Scott Fraser’s left-footed effort from the edge of the ‘D’ was deflected just wide of Ryan Scully’s left-hand upright by a Thistle defender. The Jags were seriously struggling to contain the pace and movement of United’s forward line with Tope Obadeyi, Scott Fraser and Cammy Smith causing havoc amongst the Thistle rear-guard and it was the latter who opened the scoring for the home side in the 10th minute. The architect was Fraser who intercepted a poor pass on the half-way line before driving forward, unchallenged towards goal. When he was only 25 yards out from the target it looked for a second as though he would choose to shoot but instead slipped a perfect pass into the path of Cammy Smith who controlled the ball before side-footing it under the advancing Skully to make it 1-0 to the Terrors. United continued to dominate the game and almost made it 2-0 when Mark Durnan met a Cammy Smith corner with his head but he was unable to keep his effort down and it flew over the crossbar. Obadeyi was next to try his luck, with a low, dipping, left-footed effort from 25 yards out which was parried away from goal by Scully. The next chance of the match fell to the visitors and it really should have been taken. David Amoo made a surging run down the right-back before cutting the ball back into the box where it was met first time by Erskine only 14 yards from goal but the former United man could only blaze over into the away support housed in the Shed. He would soon regret that missed opportunity, when on 27 minutes, the home side doubled their lead. Obadeyi did well to flick on a hopeful long-ball out of defence with his head, into the path of Cammy Smith just inside the Thistle half and the young forward took it in his stride, beating one defender with ease before charging down the field, side-stepping the challenge of Calum Booth and showing great composure to finish across the face of the goal into Scully’s bottom left-hand corner. Smith was now on a hat-trick and within minutes he was handed the perfect opportunity to score his third of the game. Scully did well to save an excellent long-range effort from Smith himself but the ball fell to Blair Spittal in the box and his fierce shot was blocked by the arm of Ziggy Gordon and the referee pointed to the penalty-spot. There was only one man to take the kick. Cammy Smith stepped up and confidently put the ball past the keeper to complete his hat-trick and give United a commanding 3-0 lead over their Premiership opponents. Alan Archibald made a tactical substitution on 39 minutes, withdrawing David Amoo in favour of Ade Azeez but Ray McKinnon’s side remained on top until the half time whistle and could have increased their lead had Ryan Scully in the Thistle goal not been sharp enough to save efforts from Spittal and Obadeyi. The away side did however have a good chance to pull a goal back right on the half time whistle when substitute Azeez found himself through on goal but he was unable to beat the advancing figure of Cammy Bell from a tight angle.

A few harsh words were sure to have been said in the away dressing room during the interval and they seemed to have had some sort of impact on Thistle who started the second half much more organised than they had the first. As a result, United were struggling to exploit the spaces in the Jags defence which have proved so profitable in the first 45 minutes and the game descended into a scrappy affair. Blair Spittal did manage to find an opening early on but his right-footed, bending effort was well dealt with by Scully. The game took a turn in the 65th minute then Thistle were awarded a penalty-kick of their own after referee Steven McLean adjudged Chris Erskine to have been fouled in the box by Lewis Toshney, to the fury of the home support. Sean Welsh made no mistake from the spot and United were now left to deal with the real possibility of a Thistle comeback. McKinnon was then forced to make a chance to his back four when Toshney was forced off the field with what appeared to be a calf problem and he was replaced by Sean Dillon. The Jags were now pressing high up the pitch, without putting the United defence under any real sustained pressure, and this also left the Thistle back-line vulnerable to counter-attacks. However, the Firhill men didn’t help their own cause when they almost set-up a fourth goal for United with Obadeyi intercepting a woeful pass-back before using his blistering pace to run clear of his marker but he was foiled by Scully when trying to round the keeper. Hat-trick hero Cammy Smith was then withdrawn, receiving a standing ovation from the home crowd, and was replaced by Simon Murray who almost made an impact off the bench when United broke quickly up the field but his effort was saved. In the end the match finished 3-1 – an impressive score-line against a Premiership side and real statement of intent to the rest of the Championship. 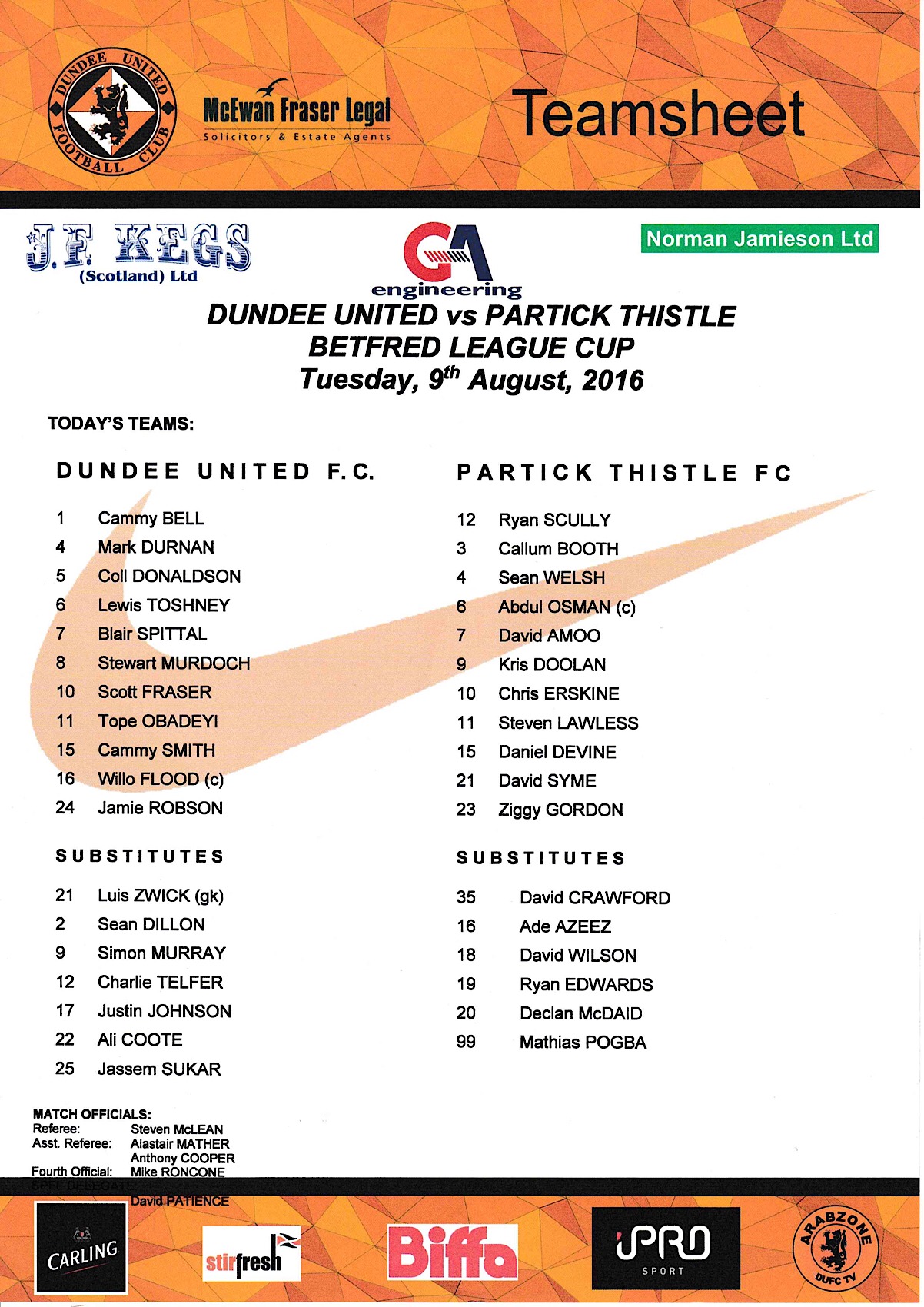