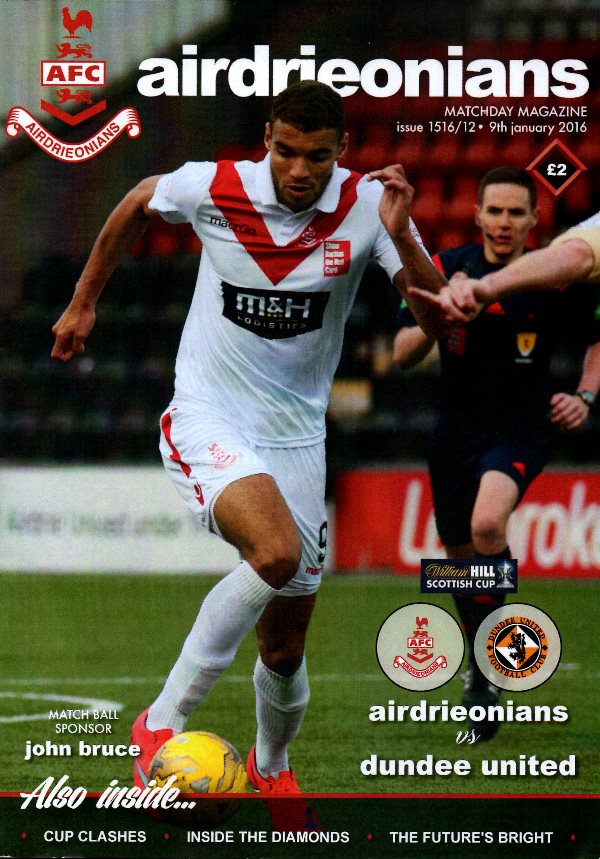 United made just two changes to the side that last weekend fell to defeat at Dens Park, Coll Donaldson and Mark Durnan replacing the suspended defensive duo Gavin Gunning and Ryan McGowan. New signing Riku Riski found a spot on the bench, whilst Robbie Muirhead also returned to the bench after a loan spell with Partick Thistle.

It was the home side who got off to the better start, inside the first ten minutes the ball flying up perfectly for striker Brian Prunty to head an effort on target, but Eiji Kawashim did well to tip Prunty’s effort over the crossbar and out for a corner. United did then have an opportunity to take the lead themselves shortly after when Paul Dixon cut onto his right foot just outside the box, before lashing a curling effort off the top of the crossbar. Just ten minutes later Airdrie, again, came close to opening the scoring, wide-man Nicky Cadden floating a cross to the back-post that fell to Jamie Bain, however, the central midfielder lifted his strike well above target when found with space inside the box. As the half progressed United began to look the stronger side, only a well-time block from Airdrie defender Fitzpatrick denying Chris Erskine from ripping the net with a half-volley.

Much like the beginning of the first period, the first opportunity after the interval came for the home side, when David Cox jinked by Rankin on the left flank, before hitting a tame effort from outside of the box into the grasp of the confident Kawashima. Just after the hour mark, United, again, had a golden opportunity to open the scoring, this time brilliant play from Scott Fraser seeing Billy Mckay go one-on-one with young goalkeeper Rohan Ferguson, but Mckay could only hit a low drive into the side netting much to the despair of the 1,400, strong Arab backing. United were seemingly finding luck down the left-flank through marauding wing-back Paul Dixon’s direct approach to attacks. Dixon so nearly provided the spark to open the scoring when he dinked a cross into the path of the impressive Scott Fraser, but he could only fire his volley off of the 4G surface and narrowly above the woodwork. With a replay looking likely and only 15 minutes left on the clock, Ferguson produced a fine save to deny Fraser from opening the scoring late on, Fraser again pinging an effort on target, but the young Airdrie goalkeeper used a strong arm to parry the ball away from danger. As the clock struck 79 minutes, United were awarded a free-kick in a dangerous position after Fraser was adjudged to have unfairly been chopped down. Incredibly similar to his goal the week before at Dens, up stepped Blair Spittal, who curled his set-piece decisively into the corner of the Airdrieonians, a goal that ensured United’s name would be in the hat for the next round of the Scottish Cup.