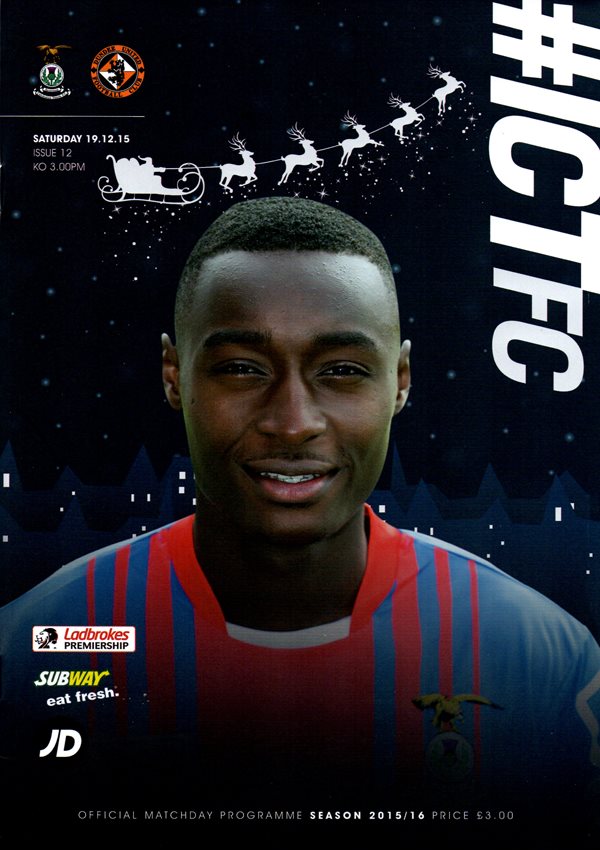 Prior to kick off United sat rooted to the bottom of the league, while Inverness remained just outside the top six. Mixu Paatelainen made 3 changes to the team who went down to Partick Thistle the previous week with Pongolle missing out through injury, and the duo of Spittal and Souttar dropping to the bench. Rankin, Fraser and Erskine came into the side. John Hughes elected to make just one switch with Lewis Horner replacing Josh Meekings.

United came roaring out of the traps and could have gone in front in the opening minutes when McKay came close to converting a Chris Erskine cross. Inverness then turned the screw by forcing successive corners, all of which were swung into the danger area at the back post. In all cases, United dealt well with the pressure and used the opportunity to trigger counter attacks in response. On one such break, the lively Fraser played in Dixon but Williams blocked his effort. As weather conditions worsened, the chances continued to arrive. Demel knocked one just over after good build up play by Fraser. Then Erskine found himself free on the left but his shot was blocked again by the Caley ‘keeper. Midway through the first half United got their nose in front with a fantastic goal. Scott Fraser, the catalyst to most of United’s good play, cut inside his marker at the touchline and laid the ball back to the on-rushing John Rankin. The midfielder smashed a shot from 16 yards into the net, off the underside of the bar to become the first United player other than McKay to score since September. Caley pushed hard for leveler and the home fans were on their feet when a long range drive from Danny Devine flew just inches past Szromnik’s post. The home side’s best chance came two minutes from the interval when a whipped in cross, found Vincent free at the back post. When it looked easier to score, the big striker nodded just past - much to the relief of those in tangerine. With underfoot conditions becoming increasingly challenging, both McKay and Erskine failed to convert the ball as it skidded around in the Caley six yard box on the stroke of half time.

Before many had returned to their seats following the half time break, Inverness snatched an equaliser. Liam Polworth found space in the box and placed a Danny Williams cross beyond Szromnik. United looked visibly rattled by the early goal conceded and took time to get a foothold back in the game. On the hour mark, United had a good shout for a penalty when McGowan rushed into the box to strike a loose ball. However, as he was about to pull the trigger he was brought crashing down amid strong penalty claims from the United players and fans. The referee elected to continue play. The game settled down into a midfield battle with neither side able to take command. However, with 15 minutes remaining United sparked into life and began asserting pressure on the Caley back line. Rankin spun and fired a long-range effort just over the bar in the 79th minute and after a further two minutes of pressure, United clawed themselves back in front. Under pressure, Williams spilled a cross from the left and Billy Mckay was on hand to turn the ball over the line. Inverness had nothing to lose and pushed men forward in an attempt to salvage something from the game. They almost did when from a corner, Gary Warren struck the crossbar with a header. That looked to be the final chance missed for Inverness, but there was one more to come. With the game into injury time, Lewis Horner’s header sneaked just over the line as United desperately tried to clear. The referee pointed to the centre and United had just enough time to restart the game before he blew for full-time.

Manager's Comment:
“It wasn't a foul in my mind and the referee saw no foul either. There were plenty of positives but it wasn't enough to win the match and today was a glorious chance to win.”

Fan's Comment:
“United looked decent in the first half and didn't succumb to the arial bombardment from Inverness. When their chance came along, they took it. However, in the second half there looked to be a bit of confusion over the formation when Gunning moved to left back. Caley took control of the second period but again we got our noses in front. Typical of how things are going for us that we lost the lead with the last kick of the ball.”