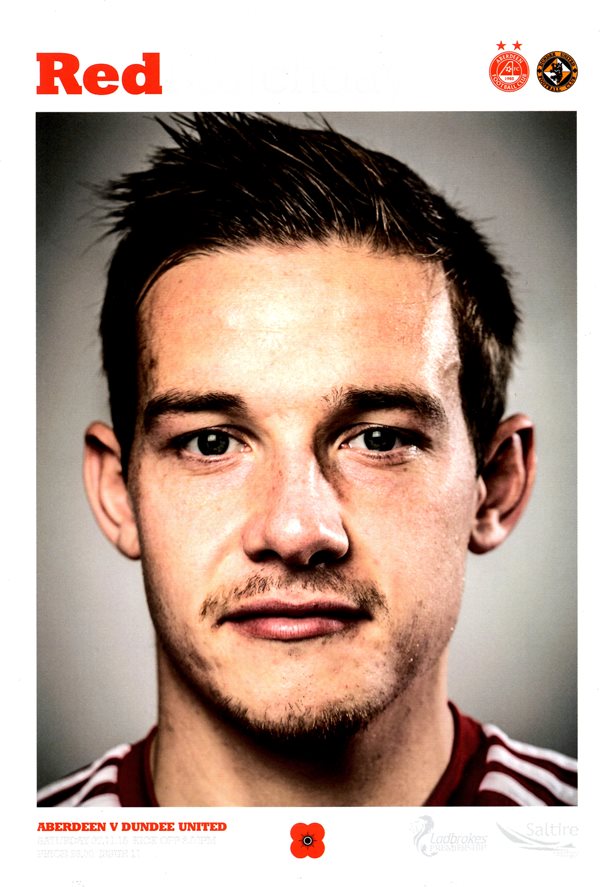 Following the midweek defeat at Easter Road, Mixu Paatelainen made just one change in personnel with the welcome return of Paul Dixon back for the first time since the 2-1 defeat at Ross County at the end of August. Aaron Kuhl was the man to drop down to the bench. However, there were also two positional changes with skipper Sean Dillon switching to right-back to accommodate ‘Dicker’, whilst John Souttar moved into midfield to fill the vacancy left by Kuhl.

With both teams desperate to arrest a slump in fortunes, it was an understandably frenetic start. The returning Dixon headed away a Johnny Hayes cross in the opening minute. Then on nine minutes came the first real chance, Hayes getting on the end of a cross from the right but unable to hit the target with a close range effort. The Dons were making most of the running mainly down the left-hand side. And on 16 minutes Mark Durnan was on hand to sweep a Graeme Shinnie cross clear. And from the same source, Durnan again came to the rescue, diverting a dangerous low cross past the near post for a corner. Aberdeen may have done all the pressing but United went close after 25 minutes, a deflected Blair Spittal shot dipping just over, but nothing came of the resultant corner. But a couple of minutes later, Michal Szromnik came to the rescue tipping a Peter Pawlett grounder just past the post. Not much had been seen of United as an attacking force, but the Dons defence had to be alert to cut a Sean Dillon cross bound for Billy Mckay after 36 minutes. But it was at the other end that a goal threatened a minute later when Flood was on the end of a Hayes cross, but the former United man, under pressure from Dixon, fired over. However, as the game opened up a bit, Scott Fraser had time and space to advance on goal with United having a three on two advantage; the youngster elected to go on his own but his effort was just off target.

The second half started with Aberdeen again going forward and Szromnik brilliantly plucked a Hayes cross out of the air. At the other end, Scott Fraser got underneath an inviting Dillon cross but headed over. Unfortunately, United’s resistance was broken after 51 minutes when Hayes dashed down the left to fire a low cross which reared up and Adam Rooney nodded in from close range. A couple of minutes after that another Hayes run and cross broke back to Kenny McLean who lashed a drive from the edge of the box just over. Just before the hour mark, United broke upfield and Dillon drilled a 25-yarder just wide of the far post. In an attempt to enliven the Tangerines’ United attack, Mixu Paatelainen replaced Adam Taggart after 65 minutes, introducing Simon Murray and the substitute forced Dons keeper Danny Ward to punch away a dangerous cross two minutes later. Shortly afterwards Fraser fired just past from the edge of the box to offer some hope to the 745 United fans. But with 18 minutes left it all went pear-shape when Jonny Hayes, the scourge of United all afternoon, raced down the left and cut inside unchallenged to drill the ball into the far corner. The United head coach immediately substituted Spittal for Justin Johnson and John Rankin hit United’s first shot on target after 77 minutes and, though powerful, enough it was safely into the clutches of Ward. With three minutes left, Mckay, so starved of service, did create an opening only for his shot to be blocked and that was the last chance United had.

Manager's Comment:
“Our first-half performance was okay. Once again that slackness crept in in the second half. If the ball is up in the air one yard from our goal line it has to be our defenders who react first. If they don't, we pay the price. We have to be on the front foot. Too many players are on their heels, not ready to pounce and be first on the ball. It is difficult but you have to stay patient and work with the players. There comes a time when you say, 'okay, we need new players', but I want to improve our existing squad."

Fan's Comment:
“Never felt we would take anything at Pittodrie and it turned out that we as we went down with barely a whimper. The initial period of the game was steady but as soon as Aberdeen scored the match was effectively over. It was good to see Dixon back and the more injuries that clear up the better the outlook will be for this side that is currently so bereft of confidence. ”