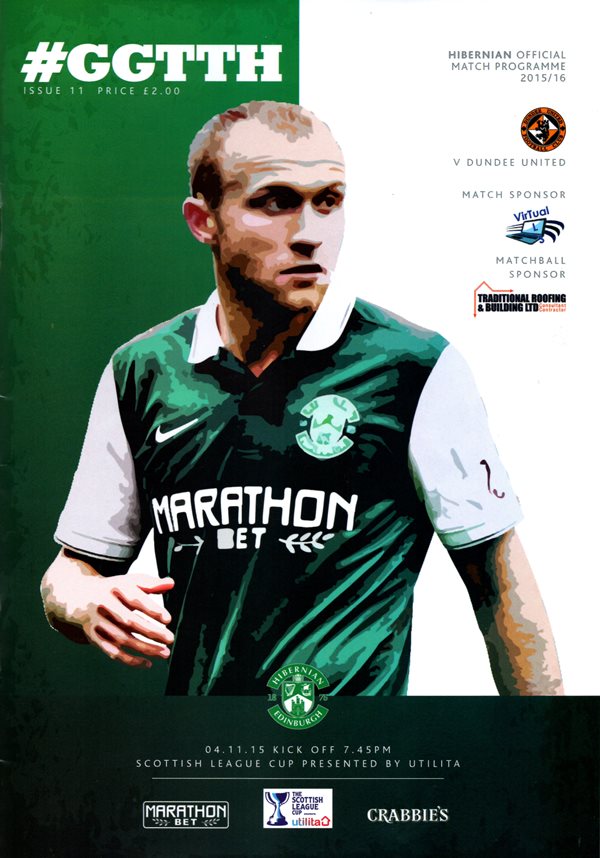 Szromnik kept his place between the sticks as Mixu Paatelainen stuck with the same side which dug in to beat Ross County at the weekend.

It was to prove an exceptionally busy evening for Szromnik, who was a busy man from the start as Hibs, buoyed by their weekend victory over Championship leaders Rangers, dominated from the first whistle and put United on the rack. Lively striker Jason Cummings posted a notice of intent within 60 seconds, when his shot from distance fizzed wide, then turned creator to set up Liam Henderson, who fired a dangerous effort just past the post. Szromnik was then called into action for the first time when he had to stretch to reach a Cummings effort from distance. The Hibs chances continued, with Szromnik again saving the day with a fine one-handed save from a powerful long-range effort from John McGinn. Durnan then slid in to deny Cummings with a fantastic last-ditch tackle, then a wicked James Keatings volley just missed. After 19 minutes of intense pressure, United finally succumbed when Hibs took the lead from an unlikely source as full back David Gray blistered an effort from outside the box into the corner of the net, leaving Szromnik with little chance. At the other end, United won their first corner when Dillon raced forward but was tackled. Although Scott Fraser’s corner was cleared, Kuhl managed to win the ball back and release the young midfielder, who beat his man before firing a shot just over.

Within seconds of the restart, Hibs nearly doubled their lead when they attacked straight from the kick off, with the resultant shot smacking off the post. United tried to get back in the game and won a corner when a Rankin cross was deflected behind. Fraser’s corner was delicately chipped to the back post and nearly deceived everyone, only to be desperately headed away off the line. On the hour mark, United looked desperately unlucky to lose a penalty when a corner appeared to strike John Rankin’s arm without him knowing much about it, only for referee Willie Collum to point to the spot. After lengthy protests by the United players, Jason Cummings sent Szromnik the wrong way to put the home side 2-0 up. With 20 minutes to go, Paatelainen tried to change things by bringing on striker Simon Murray for midfielder Kuhl. Within seconds, the energetic attacker released McKay with a good through ball only for the Northern Irish marksman to just fail to get on the end of it. In the closing stages Hibs again turned up the heat on United’s hard-pressed defence. Former United striker Farid El Alagui, on as a late substitute, then failed to take an opportunity to rub salt in his former employer’s wounds when he was teed up right in front of goal only to slip at the vital moment. With the game drawing to a close, Hibs scored a third with the last kick of the game as a Lewis Stevenson shot deflected off Fraser and spun into the net to complete a miserable night for United.

Manager's Comment:
“Hibs totally deserved their victory. We were off the pace totally. Passing wasn't good enough. All credit to the Hibs players, their movement was excellent and we didn't match that. We have a big job, that's nothing new, we knew that beforehand. Of course we can turn this around. It's going to be a long winter for us. We're not looking for a quick fix. Of course we'll take it if there is. We're prepared to work and make this right."

Fan's Comment:
“Never at the races this evening. A step back after a couple of steps forward in recent weeks.”