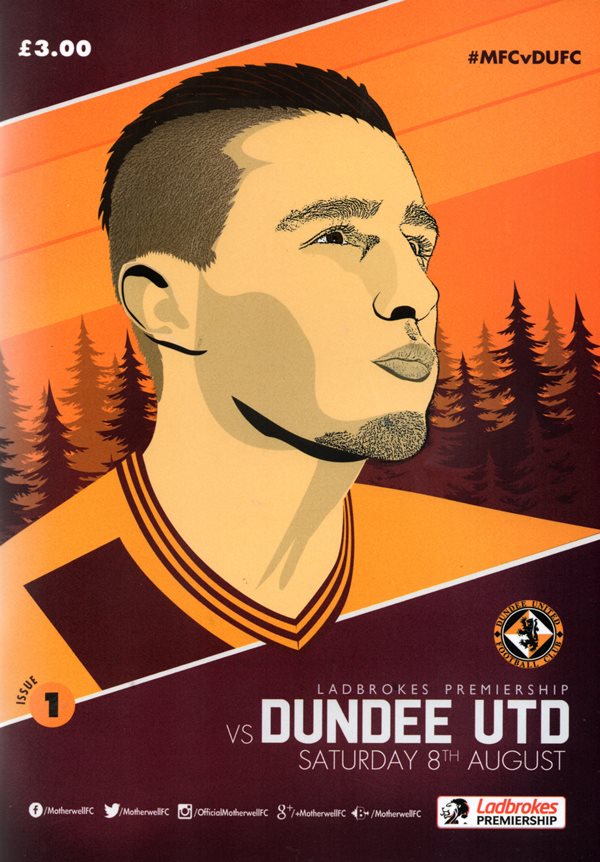 United arrived for their first away match of the season on the back of a narrow defeat to Aberdeen on the opening day of the season. The new away kit was on show for the first time as Manager Jackie McNamara elected to make just two changes. The injured Bilate made way for Bodul up front and Rankin dropped out to be replaced by youngster Fraser.

The home side started confidently after that victory, with Luis Zwick needing to be on his toes to tip a long-range effort from Marvin Johnson past the post. ‘Well kept on probing during the early stages, but a stuffy United performance kept them at bay and denied them any further chances. United’s youthful side slowly gained a foothold in the game and started to enjoy some territorial advantage of their own towards the end of an uneventful first half. Scott Fraser – making his full debut – hit a fizzer of a drive towards Ripley’s goal, but the keeper made an incredible save to turn it over the bar before the Motherwell keeper had to beat away a low long-ranger from Charlie Telfer before the break.

Telfer tested Ripley again at the start of the second half as well, with another speculative long-ranger. And the United midfielder had a golden opportunity to open the scoring after Erskine slid him in on goal, but Ripley did well to spread himself and save with his feet. Motherwell broke up the park, and were denied in similar fashion, with Zwick doing well to stay big and save with his feet, before Joe Chalmers missed a good chance just after turning a Johnson cross past the post. Zwick was called into action again; tipping a Louis Moult header over the bar, as the home side looked to take command of the game at the midway point of the second half. The game opened up in the closing stages, as both sides threw on attacking substitutes. One of those subs, Aidan Connolly, had a fierce drive beaten away by Ripley from a narrow angle; as United tried to turn the screw. Eventually the late pressure paid off, as a neat passing move ended up with the ball being fed out to the overlapping Dixon, who smashed a low cross into the Motherwell penalty area, and Louis Laing could only turn the ball into his own net with Murray lurking nearby. The young United striker couldn’t be denied his first goal, though. Ripley came up for a stoppage-time Motherwell corner, but United countered through Connolly, who coolly slid in Robbie Muirhead, to feed the overlapping Simon Murray, who turned onto his right foot and lashed the ball past Ripley after he’d eventually made it back to his goal and sealed the three points. It was an extremely professional away performance, which belied the lack of experience throughout the team. The back four defended composedly all afternoon, and were well protected by Fraser and John Souttar in front of them. While United never had the Motherwell goal under any sustained pressure, they showed good game management and were able to keep the play in the Motherwell half for decent spells of the match.

Manager's Comment:
“I thought it was a very hard fought three points. Motherwell were the best side for the first 20 minutes but after that we took a grip of the game. I thought we finished the game strongly. We tired a bit last week towards the end so it was pleasing to see. The energy from Muirhead, Connolly and Murray really helped us. This was a game that could have gone either way so it was a great result. We have a massive game on Tuesday now against Dundee and this will give us confidence.”

Fan's Comment:
“It is great to see the such a young back line performing so well. We look a solid unit defensively, but still looked a little slow in the forward areas. It wasn't until we threw on the pacey subs, that we began to make an impact in the game. The scenes when the second goal went in were fantastic. Moments like that are what supporting United are all about. A great result with a very young team.”