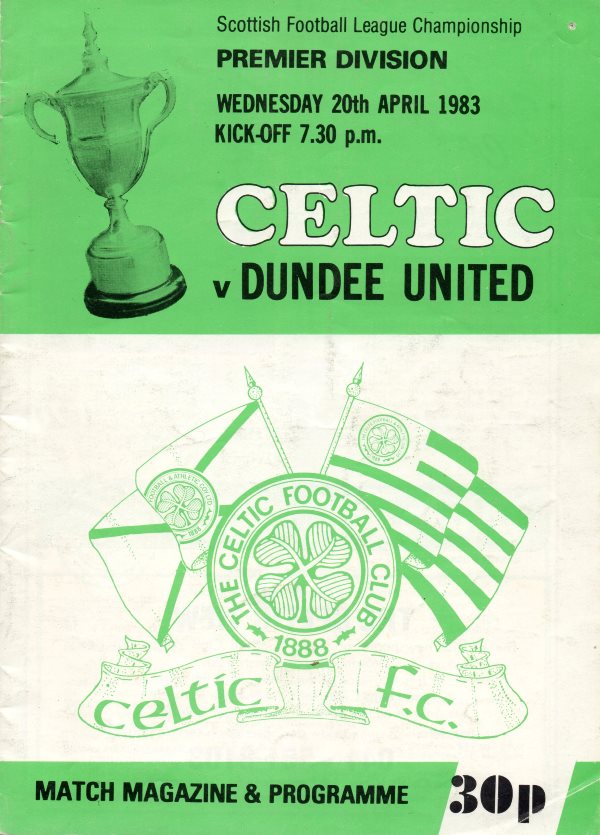 There was an overhanging sense of disappointment following United's failure to reach the semi-finals of the UEFA Cup in March. This and the fact that, after United defeat at Parkhead two weeks before this match, the team lay three points behind leaders Aberdeen in the title race and two behind Celtic, meant many papers were calling United's season as good as over. In the lead up to this rearranged game, McLean was calling for his players to show character - a win in Glasgow would put United right back into the title race, with an easier run-in in the weeks to come. Richard Gough and John Holt, who had picked up knocks in Friday night's friendly against Everton, were both named in the starting eleven, as was Eamonn Bannon who had been sent home the day before with a virus. However, Billy Kirkwood was ruled out with an ankle injury.

Dave Narey started in a midfield role and he helped United put on all the pressure. Several corners were forced but none troubled Pat Bonner in the Celtic goal. However, with 14 minutes played the latest corner led to a goal. Two weeks earlier, Hegarty had been responsible for an error that led to a Celtic goal. Now it was the turn of the Celtic defence to make an error. Eamonn Bannon's corner caused the problems. Bonner and his captain Aitken rose to meet the ball but got in each others way and the ball spun to Paul Hegarty who extended his right leg to knock it home. Despite their best efforts, Celtic had not troubled Hamish McAlpine but they hauled themselves back into the game via the penalty spot. Seven minutes of the first half remained when Davie Provan, who had been the home side's most dangerous player, fired in a cross that United failed to clear. The bar landed at the feet of Tommy Burns, who was barged to the ground by Derek Stark. The ref pointed to the spot and Charlie Nicholas equalised with ease.

Over the piece the half-time score was a reasonable reflection of the game but McLean must have delivered a powerful team talk because when his players emerged for the second half it was immediately clear they had raised their game. Gough was booked for a tough tackle on George McCluskey as United served notice that they wouldn't be pushed around in this crucial match. After 52 minutes a ball into the box was collected by Davie Dodds. He was then pulled to the ground by Murdo MacLeod. It was another clear penalty and Eamonn Bannon restored our lead from the spot. Things got tougher for United when Gough and Provan squared up to each other, sparking a general melee. The Celtic man got a caution and Gough was sent off. Narey was pulled back into defence for the last thirty minutes but this left a gaping space in midfield. Pressure had been building when the strong running McCluskey turned quickly and lost two defenders tracking him. He then squared the ball to Tommy Burns, who swept it high beyond McAlpine. Rather than sit in, United went back on the offensive and it paid off in style. With six minutes remaining United went back ahead. Bannon drove at the Celtic defence down the left before crossing to Milne. In a display of brilliant technique, Ralph Milne controlled the ball on his chest before lobbing it over the heads of the three Celtic defenders and beyond Bonner. Against all the odds and under the severest of pressure before the match, United pulled off the victory that could be so instrumental in the chase for the title. McLean stated after the game, "This is probably the best performance away from home since I became the manager."