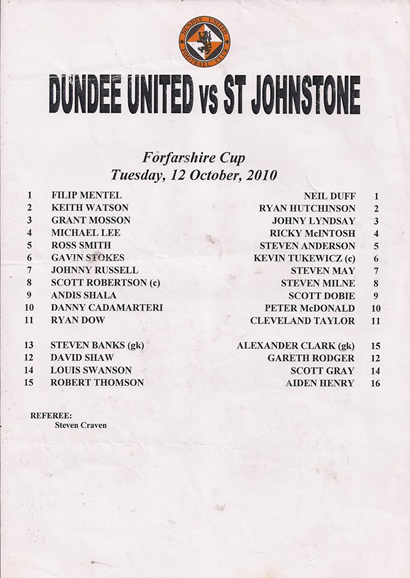 United found a more experienced Saints side too powerful as they exited the Forfarshire Cup semi-final at Tannadice this afternoon.

Although Danny Cadamarteri gave United the lead on the half hour mark, a stronger Perth side went on to level through Scott Dobie a minute before the break with Peter MacDonald getting their winner shortly after an hour’s play.

And but for a great penalty save by Filip Mentel from Dobie, the winning margin could have better greater.

Both sides contained a mix of youth and experience with the United side containing four members of Stevie Campbell’s side after it was ruled that the game came too early for either for comeback pair Craig Conway of Barry Douglas to be risked.

As the Tangerines built up a bit of momentum, Andis Shala met a Johnny Russell cross at the near post but couldn’t get enough power on it to beat Duffy.

Not that it was all one-way traffic, far from it.

Only a great block by United defender Ross Smith kept out a Cleveland Taylor effort.

And then Steven Milne warmed Filip Mentel’s hands with a stinging effort from 25 yards, which the United keeper held at the second attempt.

However, it was United who struck the first blow just before the half hour mark.

Ryan Dow slipped his marker on the right to cut the ball back to Danny Cadamarteri whose first time right foot shot from 15 yards went in via the underside of the bar.

Ten minutes from the interval it was Mentel to the rescue again, rushing to hack the ball clear after Steven May’s mazy run had taken him past two defenders.

Four minutes later, Saints missed another opportunity when Taylor turned two defenders inside out before firing the ball across the face of the box.

Although Steven Milne got his head to it, he couldn’t get enough purchase on it and the ball flew past.

United suffered a blow seven minutes from the interval when Ross Smith limped off with fellow youth team defender Davie Shaw replacing him in the heart of the defence.

In an increasingly rare United raid, Johnny Russell, United’s liveliest forward, surged up right, only to see his low drive pushed past by Duffy for a corner.

With a minute of the first half left, Saints drew level when Scott Dobie ran on to Macdonald’s clever back-heeler to dink the ball over the advancing Mentel.

Goalmouth action was less frenetic in the second period, but Saints got the goal that was to win it after 62 minutes.

The excellent May crossed from the right to the back post where Taylor chested the ball down before slipping it to MacDonald who had an easy tap in from inside the six-yard box.

With 15 minutes left, Saints squandered a golden opportunity to seal victory when Shaw bundled over Dobie to concede a penalty.

It looked a harsh award, but justice was done as Mentel brilliantly blocked Dobie’s kick and May blazed the rebound way over the bar.

And encouraged by that let-off, the Tangerines came back into the game and Neil Duffy was at full stretch to tip over a Russell pile-driver from 25 yards.

But that was as much as United could muster, and before the end, Taylor went close to adding what would have been a merited third.