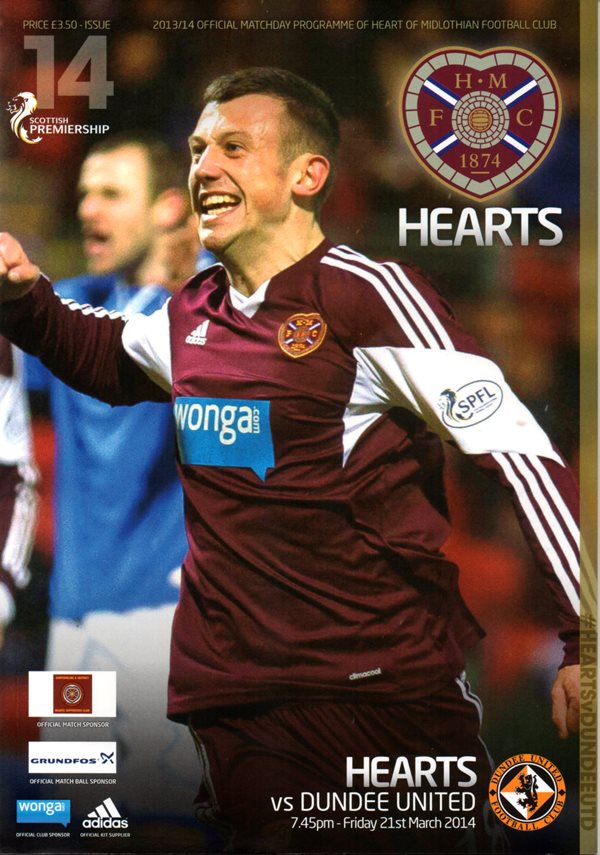 In what was the first competitive Friday night match at Tynecastle in fifty years, manager Jackie McNamara rung the changes. Into the the defence came Dillon and Wilson in place of Souttar and Watson, while all three substitutes from Saturday, Armstrong, Dow and Graham started in place of Gauld, El Alagui and the ill Mackay-Steven.

United shooting towards the Gorgie end were soon into their passing stride despite the incessant downpour and greasy surface, and they carved out the first opportunities when Rankin and Robertson both had efforts from the edge of the box. Hearts had to that point the best opportunity of the match in twenty-two minutes when Carrick turned in the box and got a low shot in which Cierzniak did well to save. United responded when Robertson and Dow combined to set up Graham whose backward header dropped just over the bar. It was better luck for the big hitman and United in thirty four minutes when United scored with a well worked goal. Rankin picked up the ball in the Hearts half and fed Dow who released Robertson with a clever reverse pass, and Robertson was able to pick out Brian Graham for a tap from almost on the goal-line. Hearts responded with a couple of half chances from set pieces, and missed a major chance three minutes from the break, when Hamill’s neat flick released Stevenson in the box but the striker, with time on his side, hit the side-netting with the goal at his mercy.

After a fairly even first half, United took control of proceedings, and begun the second half in determined fashion, taking the game to the hosts. First Robertson brought out a fantastic save from MacDonald from the angle of the box, Armstrong then had a shot saved from close in following a Ciftci dinked pass, and Armstrong came close again with a header following good link-up play with Dow and Graham. Dow was next to go close flashing a header wide from an Armstrong cross, but the goal United’s second half play had merited arrived in seventy minutes; and in spectacular fashion. Dow picked up a stray Wilson pass, and played the ball into Nadir Çiftçi, who rode several challenges on the edge of the box before curling a superb left foot shot past MacDonald. With the game seemingly decided, out of the blue, the home side were given a lifeline in seventy-seven minutes, when the danger they had posed from set pieces all night eventually paid off, with Danny Wilson meeting Nicholson’s corner with a glancing header to reduce the deficit. Despite the boost of the goal, and the home fans urging on their side, United saw out the remainder of the match in relative comfort to record a deserved win, and move within four points of third placed Motherwell.