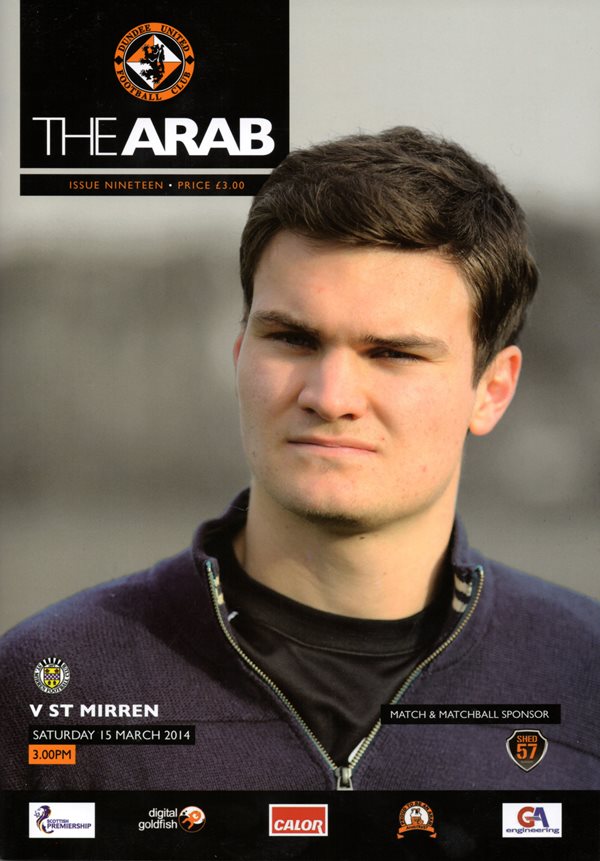 United made three changes from the side that lost to St Johnstone on Wednesday night as Manager Jackie McNamara attempting to find the winning formula again.

However, it was an awful start for United and a first half to forget. After 20 minutes Paul McGowan put St Mirren into the lead with a confident strike. The Paisly men doubled their lead later in the half when Steven Thompson scored his 14th goal of the season. However, there was a bit of luck involved. Gavin Gunning tried to clear John McGinn's whipped cross, only for the ball to cannon against the Buddies striker and into the net from four yards.

At the start of the second-half, Gary Mackay-Steven released Ciftci but the Turkish striker took one touch too many as he attempted to round Marian Kello and the chance was gone. Minutes later, Mackay-Steven struck a blistering 25-yard drive which Kello spectacularly turned over. But the Arabs pulled one back in 79 minutes when Ciftci's pass released Ryan Dow, whose cross was turned home from close range by fellow substitute Brian Graham. And five minutes later they found themselves back on level terms through Stuart Armstrong. Marc McAusland was not able to properly clear Mackay-Steven's cross and Armstrong was on hand to apply the finishing touch with a calm finish from 15 yards. Then, in injury-time, Nadir Çiftçi bundled the ball home from close-range after Kello had spilled Dow's powerful shot to complete a magnificent comeback.

Not withstanding Wednesday's loss to St Johnstone, our home form has been very good and that has been in no small measure due to the backing of our fans. That was particularly the case last Sunday at Inverness, where the tremendous turnout of Arabs, given the difficulties of making the long journey north and with an early kick-off on a Sunday, was greatly appreciated by all the players. It was therefore gratifying that we were able to repay that support by maintaining your high spirits with our biggest win of the season to neach the semi-final of the Scottish Cup for the second year in a now. In fact, it was a continuation of the good form of recent weeks, helped to a large degree by me having to make only minimal changes to the team. One that was enforced upon me was bringing in club captain Sean Dillon for the unfortunate Curtis Good, who had been injured on his full international debut for Australia. Despite having been out of the side for some time, Sean did very well. I fully appreciate how difficult it must have been for him, sitting on the side lines and watching John Souttar and Curtis Good coming in ahead of him, but from my point of view it's healthy to have such competition for places. But Sean is a fantastic professional and I know that, having regained possession of the jersey it is in hands to keep it.

Unfortunately, things didn't go according to plan in midweek against St Johnstone. In derbies like that, getting the first goal is all important, because it opens up the game with the other team having to force the pace in search of an equalisen In the first half we had two or three chances to get our noses in front, but it turned out to be one of those nights. We didn't take them and ultimately we lost the game thanks to a freak goal. It was a mistake by Rado, but show me a footballer who hasn't made a mistake. He has been in good form, but unfortunately where keepers are concerned, more often than not a mistake results in a goal. Obviously there were several decisions in the match that went against us. One was when Ryan Gauld was clipped, with officials arguing that they played advantage, though I don't understand how they could do that when it put him off balance. Then there was one of the penalty appeals where the explanation for it being ignored was that it was shoulder to shoulder though it didn't look that way to me. But it wasn't given and we just had to get on with it.
In view of Wednesday's defeat, it's now very important that we bounce back against St Mirren today, and I'm confident that we will do that In the two previous home games with them we have played well and scored a few goals, so hopefully we can do the same again. However the important thing is that, with neither Aberdeen nor Mothewell playing today we close the gap to keep the pressure on them. Enjoy the game.