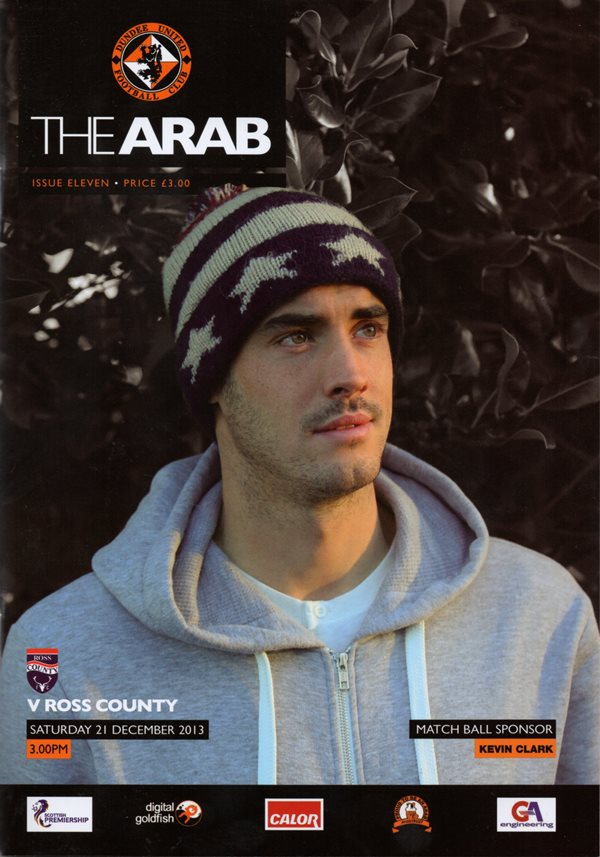 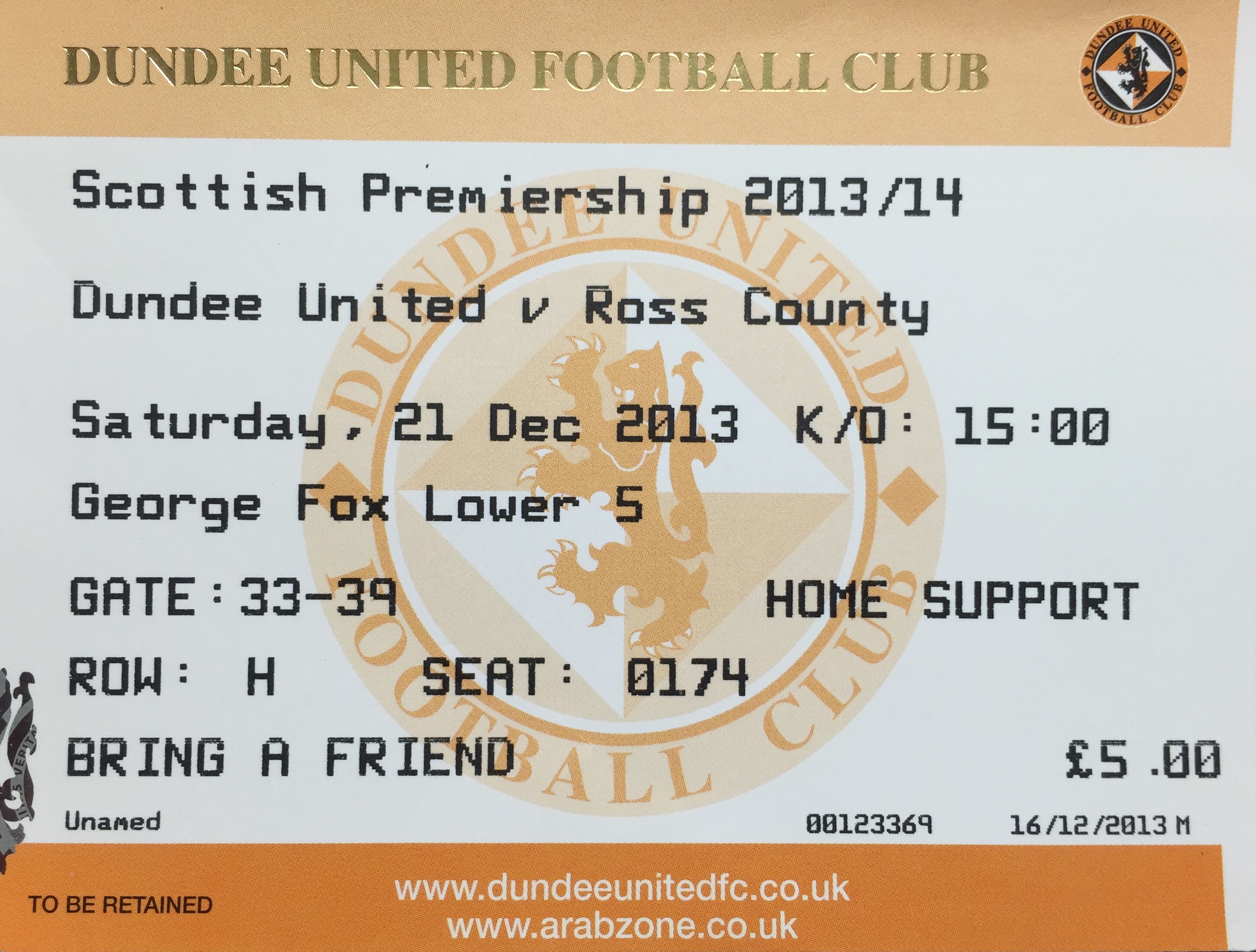 United started positively by playing some good attacking football. Again Mackay-Steven was showing his class with some great ball control and touches. Ross County had a few early chances however, these came to nothing. United did find the back of the net but this was deemed offside. Ross County came close to scoring when Luckassen headed wide after a good cross was fired in. Another chance came up for Ross County when a dangerous free kick from Graham Carey hit the United crossbar. A deflected shot from about 25 yards from Rocco Quinn gave Ross County a corner – Rankin did well to clear. Graham came close for United when a beautiful flighted cross found his head but also found keeper Michael Fraser’s arms. A well worked free kick between Armstrong and Graham won a corner but this did not come to anything. Some more pressing play by Ross County saw a De Leeuw shot going wide. A cracking corner saw Gavin Gunning heading but the County keeper made an excellent save. Another superb cross found Graham rise above everyone else in the box but once again Fraser made another good goal-stopping save. Just before half-time Gunning took a head knock but he recovered quickly. The first-half ended all square which was probably a fair summing up of the first half.

The second half kicked off with Dundee United looking in a very positive mode and the home fans roared them on. John Rankin fired in a great shot which sadly went over the bar. Another great run by Mackay-Steven won yet another corner but to no avail. Ross County tried a quick free kick move but were pulled by back referee Brines. Throughout the second half Rankin and Armstrong were making some great passes to one another. United made two subs with Gauld being replaced by Ciftci and Goodwillie coming on for Graham. Within seconds of being on the pitch Ciftci headed a great ball, but once again County keeper Fraser pulled off a brilliant save to deny the big striker a goal. United again were upping their game. With pressure mounting, the ball came to Goodwillie who blasted over the bar. A few minutes later Gary Mackay-Steven scored a cracking goal after a beautiful pass from Armstrong. By now there was some fine one-touch football from United in abundance at times. However, Ross County were to prove they were still in the game when Carey fired in a dangerous shot but thankfully no County player got to the end of it. Souttar, Gunning and Wilson were mopping up everything County threw at them – a joy to watch. Rankin, at times was unstoppable with his runs through the midfield and decided to have a go from 25 yards. Andy Robertson almost scored but the ball raced past him and was saved by the diving Fraser. County were still dangerous though and certainly could not be written off. However, they could not break down the strong Dundee United defence. The home side went on to claim victory to keep this magnificent unbeaten run going. So there is plenty of festive cheer for the Arabs – and long may it continue.

We head into the hectic festive fixture schedule in great shape after victories over Hearts and Kilmamockto make it five wins on the bounce. All along I have said that we must be strong at home and beating Hearts was another very good result; and having won our last six home games, it was important the players maintained that excellent run. Last season, we didn't win enough games at home, but that is changing, so all credit to the lads. It's never easy when teams come here, but we will stick to what we're good at which is getting the ball down and playing, and hopefully, that will continue to serve us well.

Getting the first goal was crucial as we needed Hearts to come out and play. So, it was disappointing to then concede a goal from a penalty Thereafter; it was like a cup tie with tackles flying in, but the good thing was how we responded to it. Maybe we weren't as good against Hearts as we had been in recent weeks, but the important thing was that as the game wore on we picked up our momentum which ultimately brought its reward. Obviously, scoring four goals again was extremely satisfying, especially as the goals were again spread amongst the team with four different scorers. That can make a big difference and its great for the confidence of the team overall. It shows we're not just dependent on the forwards and that's healthy. And that was also the case against Kilmamock, which was great to see because all we ask them to do is keep going until the final whistle. With the wind and rain, conditions at Rugby Park weren't great to say the least, and even although they had a man sent off midway through the first half, the game was a bit condensed and we didn't get in behind them. So at half-time I asked the players to move the ball a bit quicker because taking too many touches on the ball had allowed Kilmamock, who are well organised, to get back in numbers. And the players responded with a good team goal for the all-important opener Brian Graham's perfectly weighted pass enabled Stuart Armstrong to get to the bye-line and supply the cross for Keith Watson to finish. And that was a springboand from which we went to finish up scoring four goals again, which whilst great to see, the really important thing was that we got the three points. Good run as we have been on, we can't assume anything because it's a long season.

Therefore today's game with Ross County must be approached with caution. Last season, they proved particularly hard to beat, but over the summer there have been a lot of changes in personnel, and uncharacteristically, they have lost a lot more games and conceded far more goals this season. Nonetheless, I am sure that Derek Adams will have them fired up and well organised, so like every other game we must go into this game by being strong if we are to maintain our winning run. Starting with the visrt of Ross County, we are entering the hectic festive period wrth St Mlrren and St Johnstone ahead of a massive game against Aberdeen. But before even contemplating that, we have to take cane of those matches first and to do that we must continue doing the things that have brought rewards recently starting against County. And finally, I'd like to wish all our fans a very Merry Christmas and hope that we can all look forwai-d to the festivities with another win to celebrate.