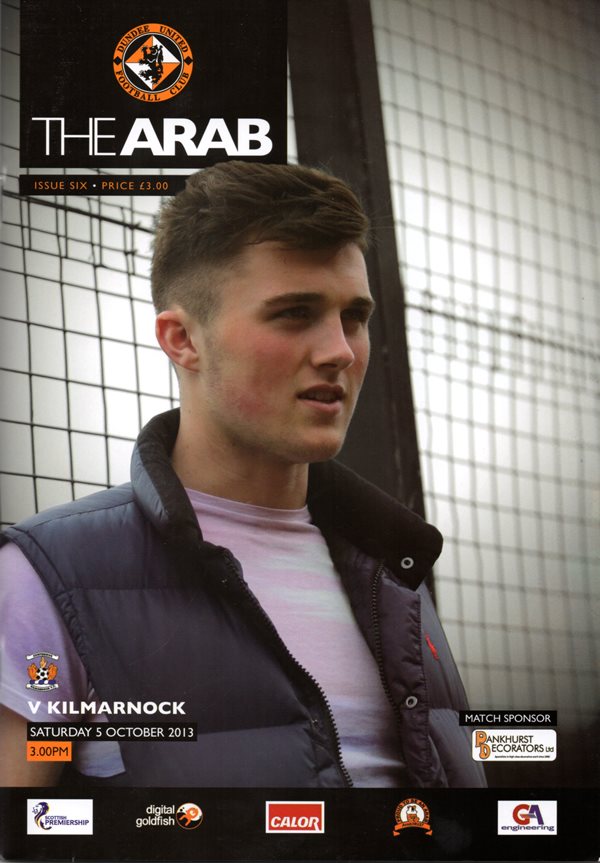 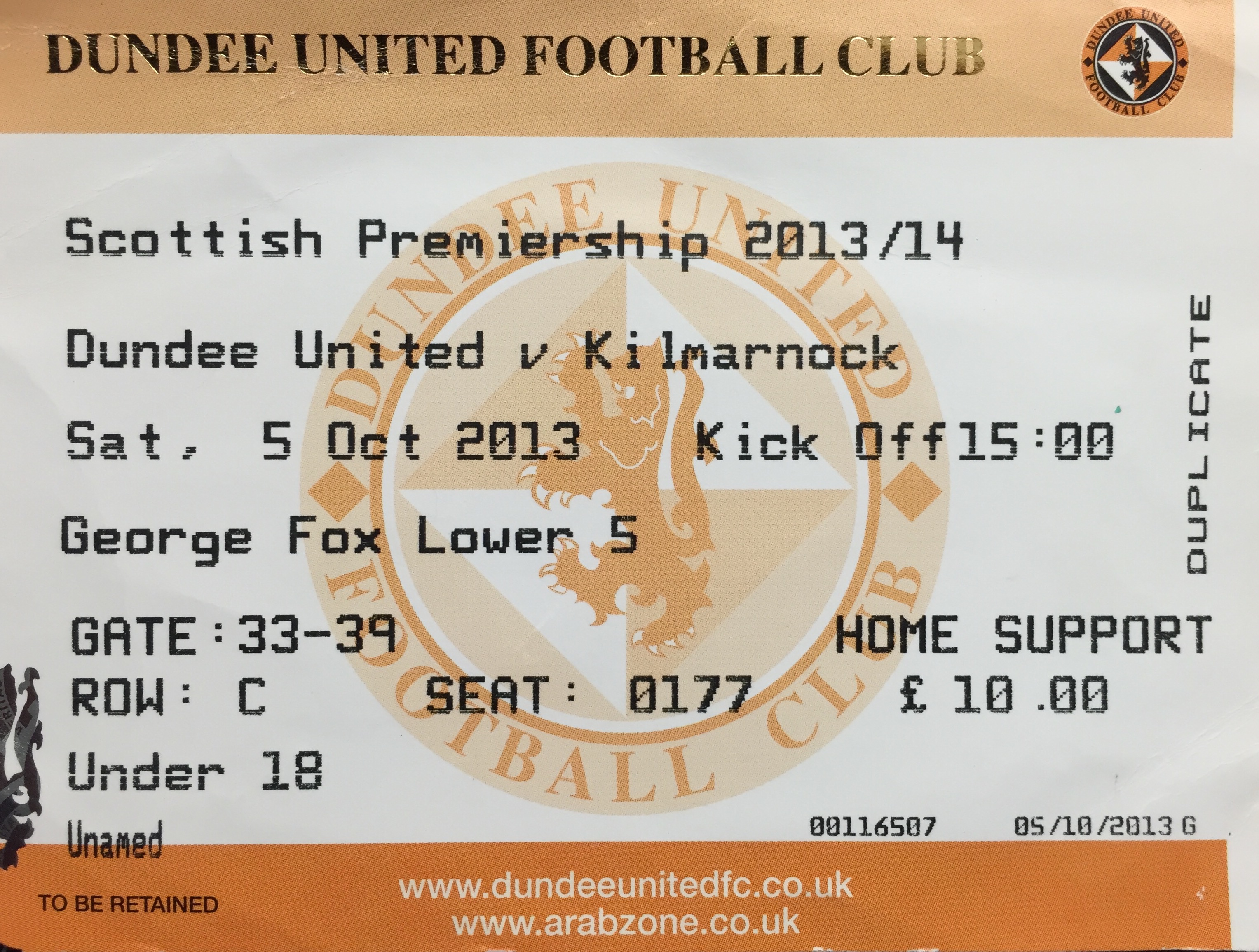 United started as expected in an attack minded formation. Goodwillie led the line, playing through the middle, supported by Gauld, with Ciftci on the left wing.

Kilmarnock’s physical approach was demonstrated as early as the seventh minute when a poor challenge by Bouzid on Paton led to one of four yellow cards for Kilmarnock. The visitors were first to threaten though when they won the first corner of the match after 16 minutes. From the resultant cross, Boyd headed harmlessly over the bar. Shortly after, the game was stopped to allow treatment to Keith Watson for a head knock. While down to ten men, United kept possession well, with good play resulting in a 20 yard shot from Ryan Gauld which was uncomfortably pushed round the post by Samson. Unfortunately for Keith, the wound required stitches and he was replaced by Gavin Gunning. On the half hour, United had the best chance of the half, when Gauld skilfully played through Goodwillie in the penalty area. Goodie’s shot beat Samson in the Killie goal, but his shot rebounded off the post. United had one further effort on goal, when a neat knock-down from Gauld to Goodwillie was laid off for a Ciftci volley, but his shot was easily saved by Samson.

Dundee United came out in the second half showing renewed vigour, with a driving run by Ciftci down the left wing setting the scene. Within two minutes Samson had pulled off good saves from Goodwillie then Gauld as United showed their intentions. Kilmarnock were next to threaten as McKenzie weaved his way into the box, but a superb tackle from Gunning averted the danger. On 56 minutes United got the all important breakthrough. Goodwillie did well to collect the ball in the penalty box and as the Killie defence filtered back, he picked out an inch perfect pass to Nadir Çiftçi on the edge of the box who volleyed a powerful shot under Samson’s body. United almost made it 2-0 with a Gauld free-kick following a foul by Pascalli. Gauld’s shot had Samson rooted to the spot, but was unfortunately inches wide of the post. United’s creative players were now running the show, with Kilmarnock unable to cope. Another fantastic run by Mackay-Steven set up Goodwille who sent a curling angled shot toward the top corner, but was again superbly saved by Samson. As the game approached its final stages, Kilmarnock sensed an opportunity, having no doubt felt fortunate to still be in the game. Ibrahim, who looked impressive after coming on for Silva was taken down on the edge of the box on 86 minutes, following a good run. The resultant free-kick was parried by Cierzniak before United were given a free-kick for dangerous play from Kilmarnock.

Our last home game brought us an excellent result against Partick Thistle and advancement to the quarterfinals of the League Cup. Most pleasing was seeing the goals going in, even although, perhaps not quite finding top gear. But Partick made it difficult for us by retaining the ball well, but the outstanding thing for me was the goal threat we carried. Equally importantly, we are not leaking goals at the back, although it was disappointing to lose one late on after taking our foot off the gas. In my last communication via this column. I stated that I wanted the team to win even if not at our best, and that was certainly the case first half against Thistle. Playing up the hill, we looked a little
nervous. Yet we went in two up at the break, and although that flattered us a wee bit, achieving that in such circumstances, is exactly what I am looking for.

For whatever reason, we seem to do better playing down the hill towards our own fans, which again proved to be the case in the Partick tie. Unfortunately, we weren't able to maintain that scoring sequence at Tynecastle last Saturday. The game against Hearts turned out to be exactly as I expected. It was a bit stop start at times, but as always at Tynecastle, there was a great atmosphere. Indeed, I wish I was still playing because I always loved playing there. First half with the crowd getting right behind them, there was a lot of energy and effort from Hearts. Their fans got right behind them cheenng every throw-in and comer which is from where most of their threat stemmed. As it can be an intimidating place, retaining possession was very important and for the first half hour; I thought we did that well and could easily have scored. Thereafter however; we got a bit sloppy with our passing. But even allowing for that, I still felt we could have come away with the three points. And we would have done had Nadir's goal not being disallowed, but whilst I know they were a bit frustrated by also having a goal chalked off, having seen a replay of the incident involving Rado, afthough soft, it I was still a free-kick. Meanwhile, Nadir's effort was disallowed for a foul by Goodie, who I thought used his body and I didn't think there was much in it. Whilst it was good to keep a clean sheet, being greedy I want three points every week and hopefully we can achieve that this afternoon. But we will need to be more clinical in the final third. Not that it will be easy because even if Killie come toTanandice still looking for their first win, I believe that they are a much better team than results indicate. From what I have seen of their games, would agree with Allan Johnston's comments that they have been unfortunate not to pick up more points. In Kris Boyd, they have a real goal threat and we must obviously keep close tabs on him.

However all, things considered, I am pleased how things are shaping up as we are beginning to gel. There is real competition for places and especially now that Gavin Gunning is free from suspension and Gary Mackay-Steven is fit again. That could be seen by the fact that I made five changes for the Partick match and a further four last Saturday. There is a good structure the side at the moment and if we do what we are capable of, we have players who can hurt them and score goals, but under-estimating them is something we must not do!