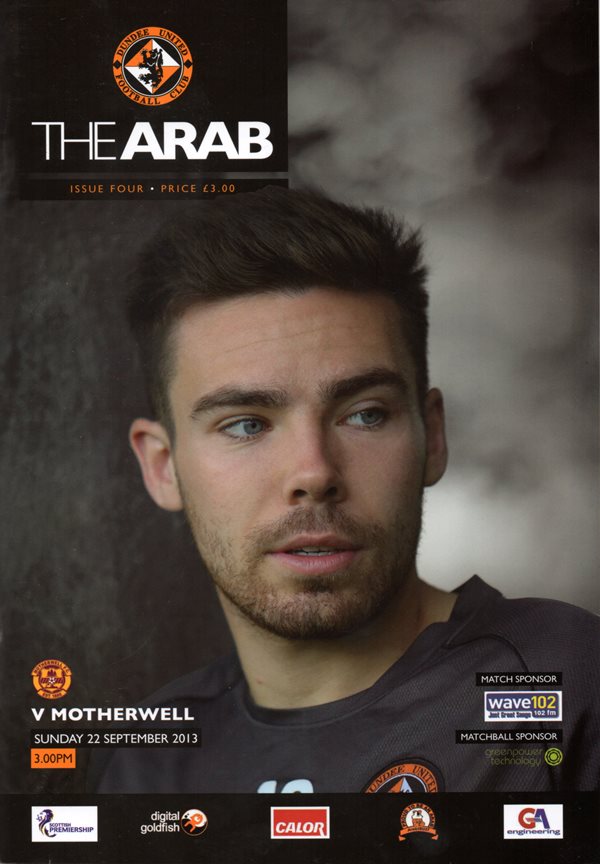 Dundee United made one change to side that defeated Ross County 4-2 in Dingwall. Gary Mackay-Steven missed out due to a slight groin injury and was replaced by Ryan Dow in what was United captain Sean Dillon’s 300th appearance for the Tangerines. Stuart McCall also made one change to his side. Stuart Ramsden returned to a starting berth following his suspension replacing James McFadden in the Motherwell starting line up.

Motherwell started the brighter and Zaine Francis-Angol was able to trouble the United defence down the left hand side. On one such occasion the winger’s cross resulted in a corner which Iain Vigurs dispatched low to the edge of the six-yard box. Arriving to head the ball was Stephen McManus. Fortunately for the Terrors, his diving header went wide across the face of the goal. With 15 minutes gone, Motherwell would be the first to test Radoslaw Cierzniak. Keith Lasley and Vigurs interlinked to allow Henri Arnier into the area on the left side. His cross to John Sutton took a deflection off the knee of Sean Dillon. However, Radoslaw Cierzniak was not to be caught out and easily collected the ball in mid-flight. Henri Arnier was not to be denied though and he opened the scoring on the half hour mark. This meant Motherwell went in at half time with a slender one goal lead.

United came storming back at Motherwell in the second half. First Nadir Çiftçi scored a fantastic equaliser and then four minutes later the game was turned on it head. A surging run and shot by Andy Robertson found the net and United were in the lead. With United looking like they might go on to score another four goals like many of their previous matches, Motherwell hit them with a sucker punch. With fourteen minutes remaining Lionel Ainsworth scored a second for the Fir Park side and this meant they returned home with a point from Tannadice.

Following the win over St Johnstone, the side has continued to progress well, even although we did lose out to Celtic in our last home game. Neil Lennon's side may have started the better side, created a couple of chances, but we came back at them and had chances of our own, particularly David Goodwillie's header. Second half, Ceftic undoubtedly had by far the greater possession, but never really tested Rado. So after defending so well, to lose the game the way we did, and so late on, was a real sickener Stokes gained a clear advantage with the winner from a free kick when he moved the ball back to give him extra distance from the wall. And that only rubbed satt in the wounds after making the most of the situation to gain the award in the first place. Whilst I wouldn't claim that we did enough to win the game, I certainly thought we deserved a draw. For me the disappointing aspect about the game was the lack of attacking we did, particularly in the second half.

But there could certainly be no complaints on that score up at Ross County last weekend when our forward play was terrific. We scored four and my only regret was that the winning margin wasn't greater due to us conceding two late goals. I think it showed that the players are starting to show a bit of self belief and all round, we are looking more solid as a unit. Certainly, I am pleased with the way the side is shaping up and that I have plenty of options available to me, particularly up front. At Dingwall.we carried real threat, and encouragingly our front four are all young. Nadir held the ball up well for us and Gauldie's decision making was first rate. There is no doubt that as a team we are maturing. Maybe final ball or finish is still missing, but you could see the players are expressing themselves wrth a bit of freedom. It's taken a bit of time for Nadir to get into the starting eleven, but you see the difference there when he's holding the ball up for the players round about him. We looked very pleasing on the eye when we moving forward.

Certainly the ones that started have merited the chance of starting the next match. And that is against Motherwell, whom we welcome this afternoon. They arrive in fine form, last week's win over St Mirren seeing them post three straight wins. Their manager Stuart McCall has done a fantastic job, having guided his side to second place last season and having started well again this term, they will be extremely difficult opponents. But as I have said before, making Tannadice a fortress is one of my prionties and hopefully we can get back on a winning track after that blip against Celtic.