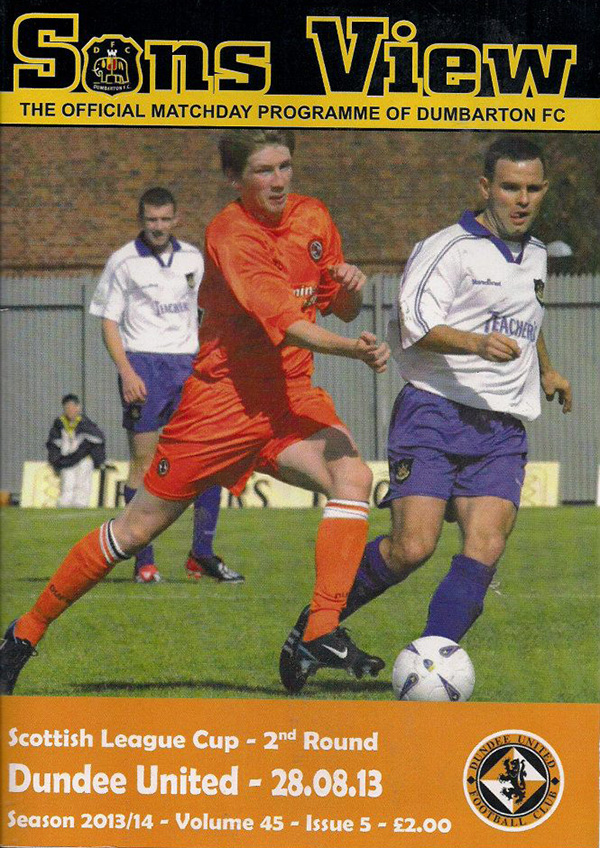 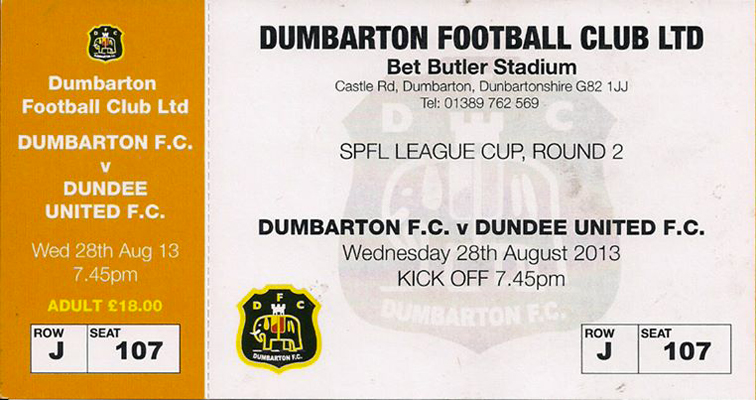 Dundee United, playing in the red heritage strip for the first time in 50 years, progressed to the third round of the League Cup after a pulsating encounter at the Bet Butler Stadium, Dumbarton.

United’s first clear cut chance came in seven minutes when Mark Wilson, making his return debut, swung in a cross which David Goodwillie met with a powerful header but failed to convert. United then had a claim for a penalty turned away when a Graham shot struck a Dumbarton hand. The referee waved the claims away adjudging the handball to have been unintentional. United continued their period of pressure with a series of chances. Ewings saved brilliantly at close range from Graham, then Gauld freed the impressive Roberston whose shot flew over. Robertson was giving the Dumbarton defence a tough time down the left wing, swinging a number of crosses into the box. Several of the crosses fell to Brian Graham, but the big striker was unable to trouble the goalkeeper. On 33 minutes, with what was their first shot on target, Dumbarton took the lead. Kevin Smith collected the ball just inside the box, cleverly turned Souttar and slotted the ball neatly into the net to Cierzniak’s right. United responded well and almost equalised when Ryan Gauld struck a superb shot from 30 yards which cracked off the crossbar with Ewings stranded. Despite forcing a succession of corners and a further opportunity for Graham which went wide, United left the field 1-0 down at half time.

United started the second half in determined fashion, with Goodwillie winning a free kick just outside the box after dancing past three defenders, then Graham poked a shot against the post after a nice through ball from Rankin. Having survived this early pressure, Dumbarton grew in confidence and almost scored a second when Barry’s shot was blocked by Robertson. United were pressing, but were finding it difficult to break down the resolute Dumbarton defence. Jackie McNamara then brought on Ciftci for Wilson, who made an almost immediate impact. In 69 minutes, Paton played a long through ball which was misjudged by Smith in the Dumbarton defence, allowing Ciftci to control before driving a low shot past Ewings for United’s equaliser - to the relief of the United support. United were now back in control and continued to press for a second. In 77 minutes it arrived. Again Ciftci was involved as he dribbled into the box before cutting the ball back into a ruck of players. The ball broke to Gauld who skilfully made a yard of space for himself before firing into the net from an acute angle. 2-1 United! Dumbarton were not going to allow this game to slip away, and to their credit continued to push for an equaliser. With three minutes remaining, sloppy defending from United led to Megginson collecting the ball on the edge of the box. He then curled a beautiful shot into the top right hand corner of the net for Dumbarton’s equaliser: 2-2! The game looked set for extra time. But with both teams continuing to look for a winner, Ciftci scored his second and United’s third to clinch the victory in the 89th minute. Played through by fellow substitute Erskine, he again scored low to the keeper’s left: 3-2!