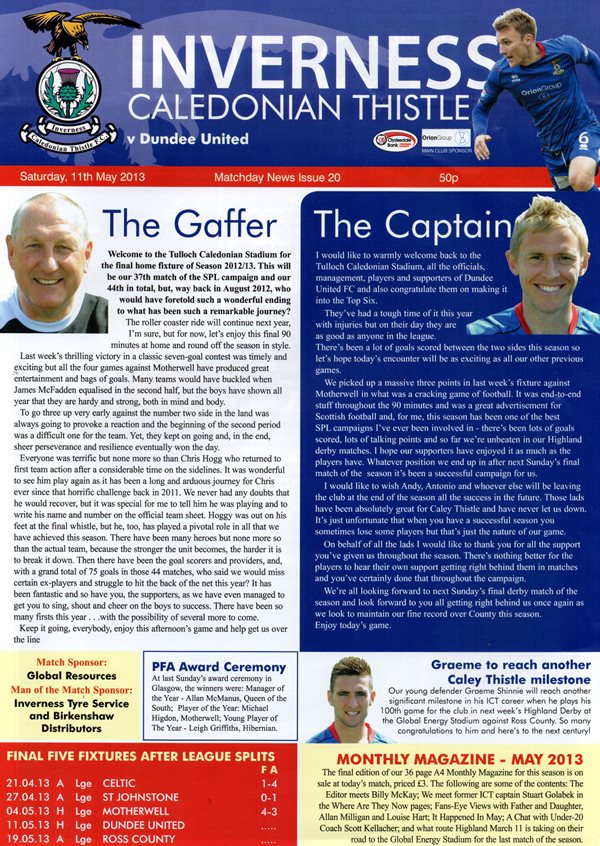 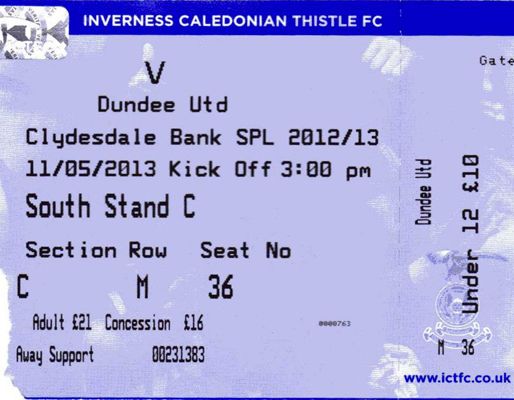 United's last away game for the campaign was an all action affair in which the Tangerines came from behind to snatch a dramatic winner to end a four-match losing streak. At times United had to weather intense spells of pressure, but always looked dangerous on the break and were rewarded for their resolute defending with two second half goals. Manager Jackie McNamara made four changes in personnel from last week's defeat to St Johnstone with Luke Johnston, Mark Millar and Michael Gardyne all dropping to the bench, while of course, Sean Dillon was out after his ankle operation last Monday. Coming into an attacking minded 3-4-3 formation were Ryan Dow, John Rankin, Ryan Gauld and Johnny Russell starting for the first time since breaking his leg on United's last visit to Inverness at the end of February. The only change for the hosts was David Raven returning from suspension to replace Danny Devine in defence.

Knowing a win would guarantee European football next season, Terry Butcher's side went gung ho from the first whistle. A speculative 30-yarder from Caley Thistle skipper Richie Foran after three minutes went straight into the midrift of Rado Cierzniak, but illustrated the hosts' intentions. And a minute later, an Andrew Shinnie shot from 20 yards was deflected for a corner. Inverness maintained their attacking momentum and, with eight minutes gone, Cierzniak only collected an Aaron Doran cross from the left at the second attempt. But in their first foray forward, it was United who almost broke the deadlock. Stuart Armstrong spread the ball out to Russell who surged to the bye-line before cutting the ball back to Armstrong whose first time low drive from 15 yards was only blocked by the legs of home keeper Antonio Reguero. Andrew Shinne was adjudged to have been fouled after 18 minutes under a Willo Flood challenge and from the free-kick Josh Meekings drilled a low shot from 22 yards a yard wide. A minute later, the United goal had a narrow escape. Again Andrew Shinne was involved pushing the ball through to Billy McKay who was in space in the right-hand channel to square the ball across goal, but Jon Daly did just enough to prevent Doran applying the finishing touch. The Tangerines continued to look dangerous on the break and Graeme Shinnie made a timely clearance from Ryan Dow as he waited to collect a Rankin cross after 25 minutes. Just past the half hour mark, Andrew Shinnie curled in a cross from the left which swerved only a foot or so past the far post. Caley's assault on the United goal continued with Daly twice made making blocks at full stretch from good attempts by McKay and Doran in quick succession. And on 36 minutes the home pressure looked as though it would be rewarded when Rankin was adjudged to have downed Doran in the penalty box for which he was rather harshly booked. Before Billy McKay took the kick, Cierzniak was booked for not retreating, but the keeper instantly went from saint to sinner with a fabulous save at full stretch from McKay's well struck penalty. But three minutes from the interval, United's luck ran out. Raven threaded the ball through to Aaron Doran and he turned quickly to fire the ball low into the bottom left-hand corner from 25 yards. A minute from the interval, United almost levelled. Flood won their first corner of the game. And from Dow's corner from the right, Daly powered in a header which Reguero did well to hold low down.

Caley Thistle again started the second half on the front foot, Doran cutting in from then right but firing straight at Cierzniak. However, four minutes after the restart, United equalised. Flood floated over a free-kick which Daly headed down and Ryan Dow guided his volley home from the edge of the six-yard box for his first league goal. Ross Draper became the first Caley Thistle to be booked for a foul on Gary Mackay-Steven. Doran volleyed just over from 25 yards after 56 minutes as the hosts looked to get the point that would take them into Europe for the first time. But it was United who almost went two minutes later. Gauld played the ball out to Armstrong on the right. He cut inside and squared the ball into the middle but behind Russell and in the end Rankin fired over. Now a much more even contest, a snap shot from Russell just before the hour mark from 30 yards was powerfully hit, but well held by Reguero. At the other end, Raven fired the ball across goal and McKay was just inches away from making contact for what would have been a certain goal. With 20 minutes of the second half gone, Dow was replaced by Millar, and almost immediately, an Andrew Shinnie shot on turn was somehow blocked as they tried re-assert their ascendancy. Just after the midway point of the second half, Gardyne came on for Gauld. Caley Thistle came close after 71 minutes when McKay was on the end of an Andrew Shinnie cross, but the ball got caught up in his feet when he seemed set to score. But still chances were coming at both ends with Armstong firing over two minutes later. Immediately after that McNamara replaced the tiring Russell off and Rory Boulding took his place. As Caley Thistle went all out for the winner, Nick Ross failed to make proper contact as another chance went abegging with six minutes remaining. Instead, United put on the pressure and after several efforts were blocked, Daly headed a Flood corner agonisingly wide with five minutes remaining. And at the start of three minutes of injury time, United scored a dramatic winner. Flood found Armstrong on the right and Gary Mackay-Steven knocked home at the far post to deliver a sucker-punch to Caley Thistle's Euro hopes and leaving them sweating until the final round of fixtures.