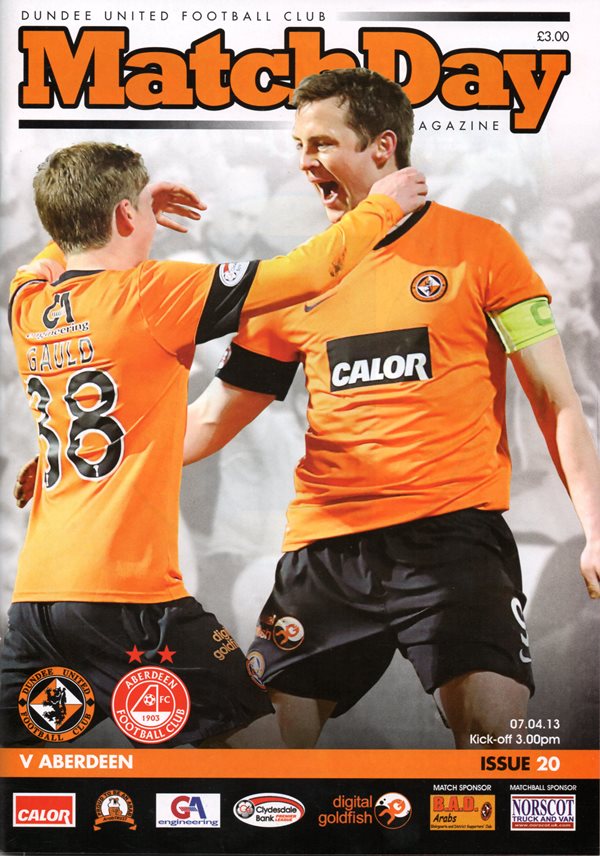 On a day that held several permutations one thing was for sure – both United and Aberdeen would be going all out to win their last fixture prior to the league split. Whether or not either of the teams would make the top half ultimately depended on Kilmarnock slipping up at home to Dundee but to have any sort of chance both the Terrors and the Dons had to win the game. After losing a late goal at McDiarmid Park on Monday night, Jackie McNamara made two changes to his starting line up, both of which were enforced. Brian McLean missed out through injury which meant 17-year-old John Souttar came into defence. After his red card in the Saints clash, Stuart Armstrong missed out through suspension allowing John Rankin to reclaim his place in central midfield. After being injured whilst on international duty, Gary Mackay-Steven was fit enough to make the bench.

Understandably it was a frantic start but as a result the game was tight and congested in midfield in the early stages. It took until the 7th minute for an effort at goal, with Mark Millar striking the ball wide from long range following an impressive surge forward from Ryan Gauld. Aberdeen then won a corner from which Russell Anderson rose to head towards goal but Cierzniak held comfortably. John Rankin was then harshly adjudged to have fouled Niall McGinn 30 yards out and from the set piece the ball was laid off to Josh Magennis who drove powerfully but wide of Cierzniak’s goal. It was evident that two evenly matched teams were cancelling each other out and chances were not coming along too often. Just after the half hour mark Anderson had another headed opportunity but could only divert the ball behind at the back post from another set piece delivery. Then a mix up between Jamie Langfield and Anderson saw the ball come off Gauld and bounce narrowly wide of goal. Following an Aberdeen counter attack McGinn shot high into the stand before another United chance came when Willo Flood fed the ball to Michael Gardyne. The forward composed himself for the shot but could only angle his effort wide of Langfield’s goal. Another effort which ended up high in the Eddie Thompson stand, this time from Josh Magennis, preceded what turned out to be the best chance of the half right on half time. Ryan Gauld found space down the left and cut the ball back for Jon Daly who didn’t have much time to react and shot high over from around 10 yards out.

In the second half, Rado Cierzniak was forced to make a decent save early on from a McGinn header which followed a Johnny Hayes cross before Gauld won United a free kick in a dangerous position. Barry Douglas hit the wall but the ball broke for Rankin who drilled at goal from long range however Langfield was able to gather. Gary Mackay-Steven was introduced for Gardyne after 52 minutes and almost immediately wasted a golden opportunity. Gauld fought bravely to win the ball in midfield and played the sub clear through on goal. Only a last ditch challenge from Reynolds as he was about to pull the trigger prevented the Tangerines from taking the lead. From the corner Keith Watson ghosted in and headed only narrowly wide of Langfield’s right post as United upped the pressure. A sublime juggle from Mackay-Steven on the left flank allowed him to deliver the ball into the box. The clearance fell to Millar whose driven shot was deflected for a corner. The hosts were then desperately unlucky not to take the lead. Gauld cut inside and shot right footed and when Langfield’s block rebounded off Flood the ball smashed against the crossbar. Mackay-Steven then headed the rebound onto the roof of the net and the chance was gone. With 67 minutes played Langfield had to scramble to save a goal bound Watson effort as it looked increasingly likely a goal would win it. Gauld was close again on 73 minutes as his right foot effort slipped narrowly wide following a good set up by sub Rory Boulding. The Aberdeen goal was leading a charmed life and a double save from Langfield kept the score level. Mackay-Steven played Flood into space and the United winger took on the return cross but saw his effort cleared. As the ball ricocheted around the box Daly drove fiercely towards goal but Langfield again denied United. It was almost constant home pressure just now but youngster Souttar did superbly to clear as McGinn raced in on goal following a counter attack. Boulding was next to threaten when Mackay-Steven played him in but the shot was straight at Langfield. With four minutes of the game left and news of a Dundee win at Rugby Park filtering through, both sides knew that a late goal would secure a top six place. With time running out both sides went for it. Aberdeen's Nicky Low strode forward and played the ball to Peter Pawlett who forced Cierzniak to save at the near post with his legs. Mackay-Steven appeared to have been played in for a late opportunity by Gauld but even if his effort hadn’t rolled narrowly wide an offside flag had been raised in any case. Watson then shot over from just inside the box as the game opened right up. It was frantic stuff and at the other end McGinn forced Cierzniak to save and he then did even better in touching a Fallon shot round the post with a minute to go. In injury time there was to be a dramatic late winner – and it went to the hosts. Scott Vernon dithered in the left back area and gifted the ball to Watson. He played the ball into wide open space for Rory Boulding who, under the most intense pressure, slotted beyond Langfield to win the game for United - sparking wild celebrations both in the stands and in the home dugout as United secured a top six place right at the death for the sixth year in a row.

First of all, I would like to welcome Aberdeen football Club and in particular their manager Craig Brown for whom this will be a particularly poignant afternoon, given that it his final game in management. I have him to thank for giving me my international debut and involvement in the World Cup Finals, so I am indebted to him. He has been a great servant to the Scottish game and I would like to wish him all the best on his retirement. I have the utmost respect for his achievements at club and international level and being a true gentleman. Given his patriotism, I am sure he won't want to continue being remembered as the last man to lead Scotland to the World Cup Finals for too much longer. But when I first came here, I said that we shouldn't be worrying about other teams ahead of the split, but that is exactly the position we find ourselves in this afternoon, depending on results elsewhere to give us a chance of making the top six. There can be little doubt that we have underachieved this season and just three home wins says it all. A lot of things need to change for next season. The positive thing for me is I know what we have got and what needs to be done to improve things. Yes, we have been hard hit by injuries and suspensions lately, but that is something from which every club suffers and why you have a squad. Whilst I brought Rory (Boulding) and Marcus (Tornstrand) in to bolster the pool, coming in when they did, neither has hod a lot of football under their belts. But it has given me a further insight as to what we have in the dressing room and where it needs to be improved.

The last home game against Dundee wasn't great. Despite starting well, after they went down to ten men, we stopped doing the things we were good at and such inconsistency has too often been a feature of our performances since I took over.However, in the end, we did rescue a point thanks to Michael Gardyne's last gasp goal. Sadly, it was the same story up at Perth last Monday night when we played well for half an hour, but again went off the boil. At half time I warned the players of the danger Saints posed from long diagonal balls and set pieces, and that ultimately proved our undoing. I thought we got nervous, and when things weren't going right, we played as individuals, rather than as a team, which to say the least was disappointing. Despite the disappointment of losing a last minute equaliser to take a top six place out of our hands, there were positives. Young Ryan Gauld started for the first rime and whilst some might say it was a gamble playing a 17-yeor-old in such an important game, in the opening half hour when we were passing the ball about, he showed how effective he can be, despite being on the wrong end of a few hefty challenges. I genuinely feel the youngster has everything - talent, ability and is exciting to watch, which is what all fans want to see. And with John Souttar who is only 16 coming on and doing well, we have another potential star. But it wasn't just the youngsters who put in a good shift Barry Douglas again showed how much his defending has improved which is testimony to just how hard he's worked in training. As we come to the final game before the split, I can assure everyone that we will be doing our utmost to win it. Firstly, obviously in the hope Killie do slip up against Dundee, but equally importantly, to reward you for the tremendous backing you gave the side at Perth, as indeed, has been the case all season.