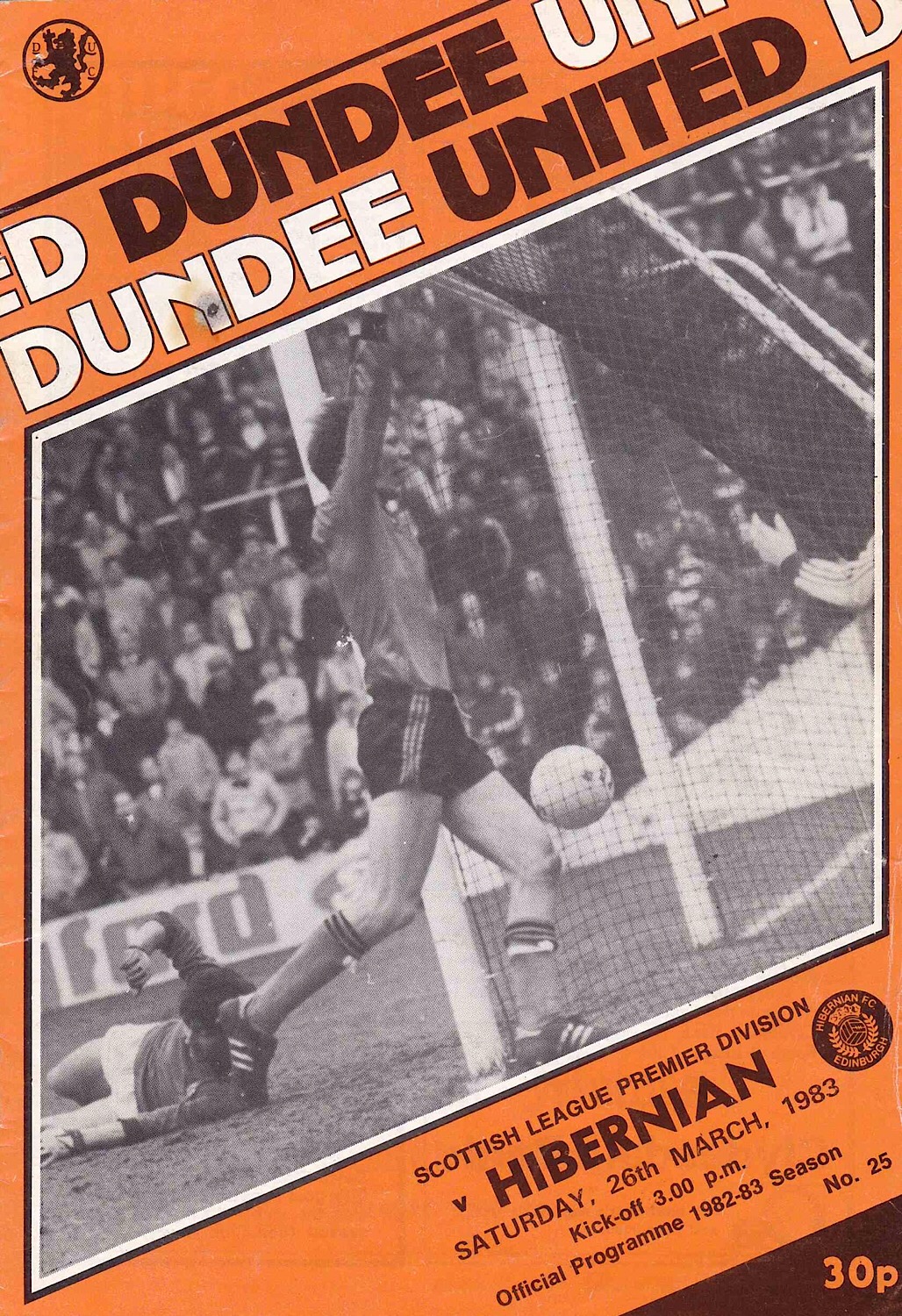 United turned up for this match in fine form and were looking to use home advantage to further strengthen their claim to be real title contenders. A win at Pittodrie the previous week blew the title race wide open and it was important United back that up with a good performance against Hibs. John Reilly replaced Paul Sturrock in the United side.

United got a fright early in this match when Gordon Rae's scored a fourth minute opener for the visiting side. However, the tangerines were soon back in the game. From a corner kick, Davie Dodds rose highest to head flick the ball into the far corner of the net and bring United back on level terms. With 22 minutes on the clock United went into the lead. Good tenacious play from John Reilly ended with him squeezing a pass into the box and the quick feet of Ian Britton allowed him to get to it before his Hibs counterpart and dispatch into the net. Richard Gough was getting further forward as the match progressed and came close with a rasping drive that Alan Rough struggled to hold. The Hibs 'keeper couldn't keep Gough out for long though. A cross from the left from Britton was missed by everyone but lurking at the edge of the box was Richard Gough who slammed home with the left foot.

A ragged second half home performance let the Easter Road side in for a deserved point. United should have had this match tied up and still had further efforts to extend their lead early in the second half. Kirkwood tried a cheeky chip shot but Rough was equal to it. Davie Dodds then had a goal disallowed after being judged to be off-side before he struck his left footed effort beyond Rough. Hibs started to look dangerous as the 2nd half progressed. A a long range Rice volley stung the hands of McAlpine. United then had a penalty claim waved away when Britton was fouled in the box. He jumped to his feet and raced after the referee holding his boot which was taken clean off in the challenge. Willie Irvine got on the end of a head flick from a long Rough clearance and slid the ball low into the corner to give Hibs hope. United tried to hold on as Hibs threw everything at them but the pressure paid off in the dying minutes when Brian Rice hit a stunning left footed volley into the top corner and severely dent United's title ambitions.

Last Saturday saw us gain a magnificent result at Pittodrie, particularly as they were facing a side fresh from a tremendous achievement in eliminating Bayern Munich. Unfortunately the gloss was taken off that achievement by two newspapers—the Sunday Mail and Daily Record—who, in my opinion, constantly highlight my comments out of context and apparently go out of their way to ridicule me. Having spoken to neither paper directly, I found myself quoted as having "blasted the players", that being their interpretation of my comments in an edited interview. Anybody who was at Pittodrie or watched the highlights on television if questioned about the McLeish-Milne incident would have said Ralph's actions were silly. My sentiments then ended up in print in these papers as "McLean Blasts Players." After my comments that my stopwatch showed the second half had lasted 47 minutes 35 seconds, the referee correctly, in my opinion, having added on time because of silly time-wasting tactics, these papers again quoted me as having "blasted the players" To my way of thinking it is irresponsible journalism, though thankfully the majority of the Press concentrated on the important fact that the title race is again wide open, with three runners in the frame. It has, therefore, been an eventful ten days since our exit from the U.E.F.A. Cup.

Our downfall against Bohemians most definitely stemmed from our inaccurate passing and lack of poise on the ball. This coupled with the players' desperation to reach the semi finals saw us falter against a side very much inferior to ourselves. However, we paid the high price of failure for failing to find the back of the net. Tempering the pain somewhat was the Reserves' triumph in the Reserve League Cup final the following Friday. They fully deserved their 3-1 victory over Rangers and I'd like to pay tribute to my right hand man Wattie Smith and coach lan Campbell for their efforts with the Reserve side. Their record on paper this season is excellent and though I regret we have no budding Andy Gray or Dave Narey in the ranks, we will see some of the current reserves graduate to first team level. At the time of writing injuries and suspensions will necessitate several changes in our line-up today. These would probably have been on the cards in any event as I am not satisfied with the present midfield play. The pressure is still on us and to win the Premier title it will require a better blend in the middle of the park. Fringe players, therefore, whether experienced or inexperienced, should be aiming to grab this opportunity. This afternoon we welcome Hibs for what will be a decidedly awkward fixture. In front of Scottish international goalkeeper Alan Rough is a very determined bunch of players, and they will prove a tough hurdle as we pursue our league challenge. Finally, I wonder what part of this article, will appear in either the Sunday Mail or Daily Record as "McLean Blasts Players".