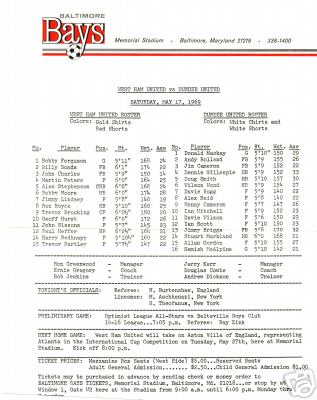 World Cup trio Bobby Moore, Geoff Hurst and Martin Peters lined up for West Ham who were representing Baltimore. Unite had begun to hit some form ahead of this match, but faced a tough test against their English opposition. United had to play in the gold uniforms of the Baltimore Bays after their own kit had been mislaid in transit.

West Ham got off to a storming start and had United rattled early on. Although they had the best chance early on when Alan Gordon went close from 12 yards. Bobby Ferguson got his fingers to the ball as it rolled towards the goal, but full back John Charles out sprinted Kenny Cameron, thrust out a foot and pushed the ball off the goal line.Trevor Brooking opened the scoring in the ninth minute, sprinting through the defence to take a pass from John Sissons on the left and then pushing the ball past the advancing Mackay, who managed to get a foot to it, but couldn't prevent it from its goal bound course. United worked hard to get back into the game but in all honesty were luckily to have such a slender deficit going in at half time.

Eleven minutes after the restart, Geoff Hurst switched play from the left to the right wing to John Sissons. Sissons pushed it inside to Bobby Moore and from 20 yards Bobby gave Mackay no chance. Four minutes later it was 3-0, as Hurst received a long goal kick from keeper Bobby Ferguson. The ball bounced over the heads of the United defence and Geoff Hurst, sprinting past Smith and Gillespie, brought the ball under control and almost walked it past Don Mackay, who was left by himself to protect his goal. United's lone goal came from Alan Gordon i the 67th minute. He took a cross from Davie Wilson and, with Ferguson stranded, scored with a shot that went into goal off the foot of Ron Boyce. Any hopes of a comeback similar to the one against Kilmarnock last Wednesday were checked as the Hammers came back with three goals the last 18 minutes. In the 73rd minute, Martin Peters took a pass from the head of Geoff Hurst and volleyed it in with a left-foot shot. Goals from Trevor Brooking two minutes from time with an easy shot from 10 yards and a final one by Ron Bryce, from a perfect pass from John Sissons a few seconds from time, ended the agony for United. After the game Jerry Kerr commented, "I think we played some of the best soccer we have played in North America in the first half, but West Ham were just too good for us. I think the score should have been about 3-1. West Ham were the best team we have played. Geoff Hurst was absolutely fantastic."